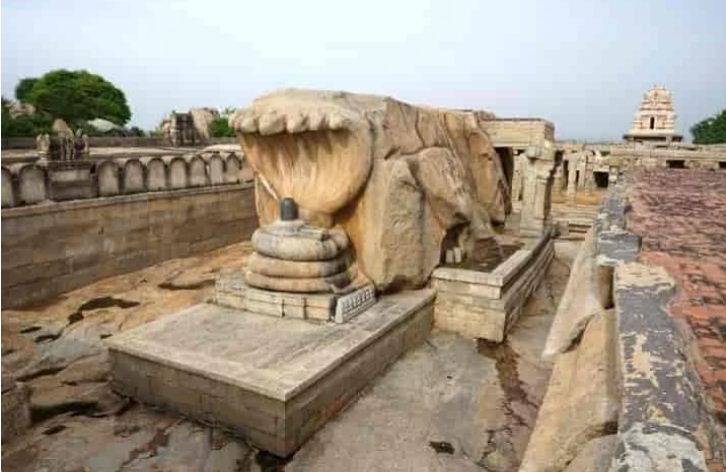 They are the Geoglyphs of the Konkan region in Maharashtra, Meghalaya’s JingKieng Jr, a living root bridge, and Sri Veerabhadra Temple and Monolithic Bull (Nandi) from Andhra Pradesh, making the total in the tentative list 49.

Geoglyph is defined as a work of art that comes into being by moving or arranging objects within a landscape. What Konkan geoglyphs special and remarkable is that are the only proof of human settlement in that region. They also depict some forms of fauna that have ceased to exist in this region.

A product of human endeavor and effort, JingKieng Jri, is an aerial bridge, created by weaving and using the roots of the Indian rubber tree. While the creation of such bridges may take 10 to 15 years, their life span is 500 years. These bridges built by Jaintia, and Khasi tribes personify human-environment confluence.

Sri Veerabhadra Temple also known as Lepakshi temple is dedicated to an incarnation of Lord Shiva — Lord Veerabhadra. Located in Andhra Pradesh’s Anantapur district, this temple is well-known for its sculptures made by artists of Vijayanagara Empire. Mount of Lord Shiva, the Nandi Bull’s monolithic idol has been chiselled out of a single granite stone and represents the best of Vijayanagara style of architecture.

In case any of the sites among the 49 is selected as a WHS, India will better its existing total of 40 sites which includes Ajanta Caves, Buddhist monuments at Sanchi, the Harappan city of Dholavira, Elephanta Caves, Ellora Caves, Konark’s Sun Temple, Taj Mahal, and Jaipur’s Jantar Mantar among others.

Explaining the advantage of being part of WHS list to India Narrative, seasoned archaeologist who retired as Regional Director, North from Archaeological Survey of India said: “The site benefits from this inclusion as it helps tourism, both domestic and international, to grow by leaps and bounds. Whenever a historical or natural place is given this tag, it sees a growth in tourist inflow.”

Going further, he added that the tag reflects the site’s “inherent heritage and historical value”.

“Moreover, as the list is well publicized it creates awareness about the selected place on a global scale, making many more people know about it. For instance, Ajanta and Ellora Caves in Maharashtra after inclusion in the WHS list, became immensely popular. Likewise, is the case with Tamil Nadu’s Brihadeshwara Temple and the Shore Temple at Mahabalipuram, and Madhya Pradesh’s Sanchi Buddhist monuments.”

Muhammed said these sites add to India’s soft power. Citing Bihar’s Nalanda Mahavihara and Mahabodhi Temple in Bodh Gaya, he said “these places are revered by Buddhists from across the world and specially people of those countries where Buddhism is the dominant religion like Japan, Myanmar, Cambodia, Mongolia, Singapore, Bhutan, Sri Lanka, Taiwan, Thailand and Vietnam among others. This facilitates people-to-people contacts making diplomatic relations stronger.”

For making it to the list, there are several conditions to be fulfilled. Specifying them for India Narrative, Muhammed said: “The monument must be unique in some way, should have historical value and architectural merit. It must have natural heritage like Kaziranga National Park, Manas Wildlife Sanctuary, Nanda Devi, and Valley of Flowers National Parks, etc.”

To ensure that more places get included in the WHS list, Muhammed said steps must be taken to improve the condition of cultural and natural sites.