HomeIndiaIndia Commits to Net Zero by 2070 at Climate Change Conference

India Commits to Net Zero by 2070 at Climate Change Conference 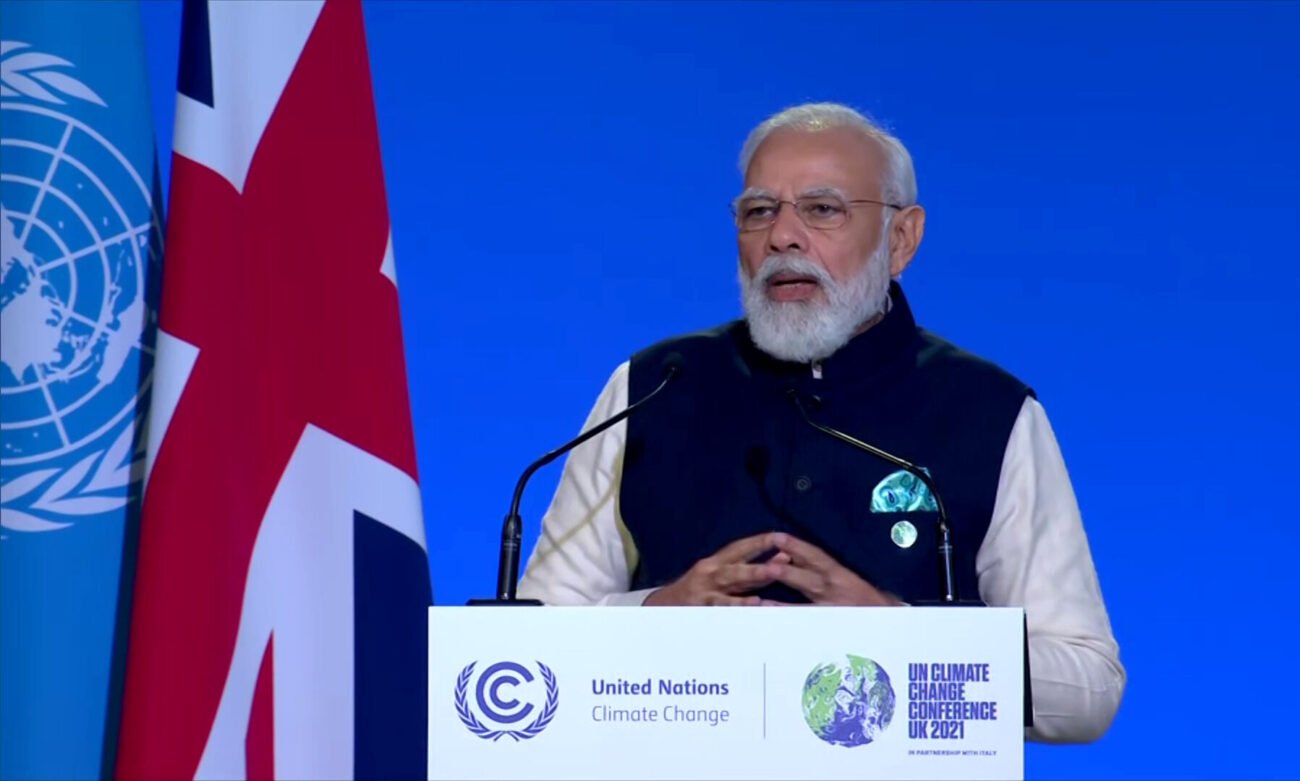 India Commits to Net Zero by 2070 at Climate Change Conference

GLASGOW – Offering a new mantra and raising a pledge for combating climate change, Prime Minister Narendra Modi Nov. 1 told world leaders at the COP26 that India will target a net zero goal by 2070 and aim at increasing its non-fossil fuel energy to 500 GW in its energy mix by 2030.

Terming it as ‘Panchamrut Ki Saugat’ – India’s contribution to climate action – Modi, on the first day of the High Level segment of the ‘World Leaders’ Summit’ at the COP26, said that India will reduce its carbon intensity by 45 percent by 2030, starting with reducing projected carbon emission from now till 2030 by 1 billion tons and committed to have the renewable energy component of 50 percent by 2030.

He gave a new mantra for sustainable development through a sustainable lifestyle. Displaying his penchant for acronyms, Modi said: “‘One Word One World’ movement mantra LIFE, ‘Lifestyle for Environment’ can be a mass movement wherein instead of mindless and destructive consumption, there should be mindful and deliberate utilization.”

India has 17 percent of the world’s population but is responsible only for 5 percent of total emissions, he said.

Calling out the rich nations by stating that the promises made till date have been hollow, he said: “Just like India has raised its ambition, the rich nations too need to raise their climate finance and technology transfer agreements cannot remain the same.”

Taking cudgels on behalf of the developing world, he appealed to the comity of nations to take bolder steps.

Modi joined 120 heads of states/governments from around the world, including U.S. President Joe Biden, at the high-level segment of the crucial negotiation platform for countries to work out their emission plans for collectively restricting global temperature rise to 1.5 degrees Celsius at the COP26, the Conference of Parties to the United Nations Convention on Climate Change, which started on Oct. 31 and will go on till Nov. 12.

Reminding people that India is the only growing economy to have delivered on the Paris Agreement in letter and spirit, he listed India’s track record – how it is fourth in installed renewable energy capacity and how non-fossil fuel energy will touch 40 percent of India’s energy mix soon.

He also said that Indian Railways, the largest such organization in the world ferrying thousands of passengers, will be net zero by 2030, reducing 60 million tons of emissions, and LEDs have helped reduce emissions by 40 MT.

Speaking in Hindi and sprinkling Sanskrit mantras and words, Modi made an emotional declaration about how, for him, Paris (where the COP was held in 2015) was not only a summit but a sentiment and a commitment and India was not making those promises to the world but it was the 130 crore Indians promising themselves.

This COP26 is deemed critical because, as warned by the Intergovernmental Panel on Climate Change, every additional 0.5 degree of warming will increase heat extremes, extreme precipitation, and droughts and for coastal areas, sea level rise will be a threat to their very existence.