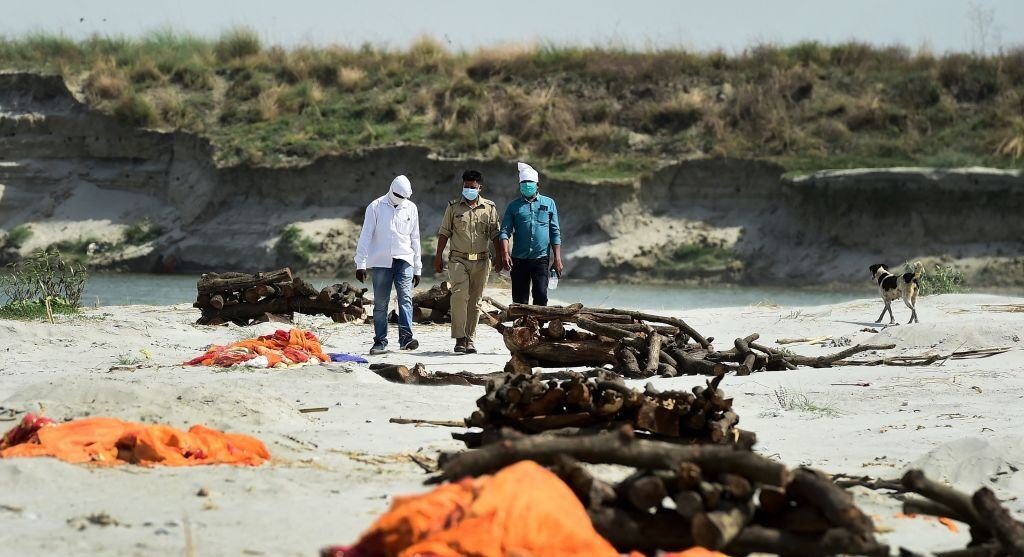 Police and administrative officials inspect an area where dead bodies were buried in the sand near a cremation ground on the banks of the Ganges River in Shringaverpur village, around 40 km from Allahabad on May 24. (Sanjay Kanojia/AFP via Getty Images)

NEW DELHI — India crossed another grim milestone May 24 with more than 300,000 people lost to the coronavirus, while a devastating surge of infections appeared to be easing in big cities but was swamping the poorer countryside.

The milestone, as recorded by India’s Health Ministry, comes as slowed vaccine deliveries have marred the country’s fight against the pandemic, forcing many to miss their shots, and a rare but fatal fungal infection affecting COVID-19 patients has worried doctors.

India’s death toll is the third-highest reported in the world after the U.S. and Brazil, accounting for 8.6 percent of the nearly 34.7 million coronavirus fatalities globally, though the true numbers are thought to be significantly greater.

The Health Ministry on Monday reported 4,454 new deaths in the last 24 hours, bringing India’s total fatalities to 303,720. It also reported 222,315 new infections, which raised the overall total to nearly 27 million since the pandemic began. Both are almost certainly undercounts.

From the remote Himalayan villages in the north, through the vast humid central plains and to the sandy beaches in the south, the pandemic has swamped India’s underfunded health care system after spreading quickly across the country.

In the capital, New Delhi, residents have died at home with no oxygen as hospitals exhausted limited supplies. In Mumbai, COVID-19 patients have died in crowded hospital corridors. In rural villages, fever and breathlessness took people before they were even tested for coronavirus.

While the megacities have seen signs of improvement in recent days, the virus isn’t finished with India by any means. It appears to have already taken a ghastly toll in the country’s vast rural areas, where a majority of the people live and where health care is limited.

In recent weeks, hundreds of bodies have washed up on the banks of the Ganges River in Uttar Pradesh state. Many others have been found buried in shallow graves along its sandy banks. It has prompted concerns that they’re the remains of COVID-19 victims.

India’s vaccination drive has also slowed recently, and many states say they don’t have enough vaccines to administer.

The world’s largest vaccine-producing nation has fully vaccinated just over 41.6 million people, or only 3.8% of its nearly 1.4 billion people. On May 24, the federal government enabled walk-in registration at government-run vaccination centers for those aged between 18 to 44 to “minimize vaccine wastage.”

The first known COVID-19 death in India happened on March 12, 2020, in southern Karnataka state. It took seven months to reach the first 100,000 dead. The official toll hit 200,000 deaths in late April. The next 100,000 deaths were recorded in just 27 days after new infections tore through dense cities and rural areas alike and overwhelmed health care systems on the brink of collapse.

Average daily deaths and cases have slightly decreased in the past few weeks and the government on May 23 said it is conducting the highest number of COVID-19 tests, with more than 2.1 million samples tested in the previous 24 hours.

In related news, Doctors in India are fighting a fatal fungal infection affecting COVID-19 patients or those who have recovered from the disease amid a coronavirus surge that has driven the country’s fatalities to nearly 300,000.

The life-threatening condition, known as mucormycosis, is relatively rare but doctors suspect that the sudden increase in the infection could further complicate India’s fight against the pandemic.

Mucormycosis is caused by exposure to mucor mold, which is commonly found in soil, air and even in the nose and mucus of humans. It spreads through the respiratory tract and erodes facial structures. Sometimes, doctors have to surgically remove the eye to stop the infection from reaching the brain.

On May 22, federal minister Sadananda Gowda said nearly 9,000 cases had been reported in India so far, leading to a shortage of Amphotericin B, the drug used to treat the condition.

Gowda didn’t share the number of fatalities, but local media have said more than 250 have died because of the disease.

Health officials were working to alleviate the drug shortage, which comes at a time when the country is already short on supplies of oxygen and other health care needs, Gowda said.

Mucormycosis has a high mortality rate and was already present in India before the pandemic. It is not contagious but its frequency in the last month has left doctors shocked.

“It is a new challenge and things are looking bleak,” said Ambrish Mithal, the chairman and head of the endocrinology and diabetes department at Max Healthcare, a chain of private hospitals in India.

“Earlier I used to come across just a few cases every year but the current infection rate is frightening,” said Mithal.

The latest surge of coronavirus infections in rural India has already taken a toll. Now heath experts are worried that over-the-counter medication, including steroids, can increase the prevalence of mucormycosis.

SK Pandey, a medical officer at Ram Manohar Lohia Hospital in Uttar Pradesh state’s Lucknow city, said that unqualified doctors were giving steroids to patients in many rural areas without giving a thought whether they require it or not.

“This has led to increase in black fungus cases in smaller cities where the patient has not even been hospitalized,” he said.

India’s Health Ministry on May 20 asked states to track the spread of the condition and declare it an epidemic, making it mandatory for all medical facilities to report the cases to a federal surveillance network.

Prime Minister Narendra Modi on May 21 called the disease a “new challenge.”