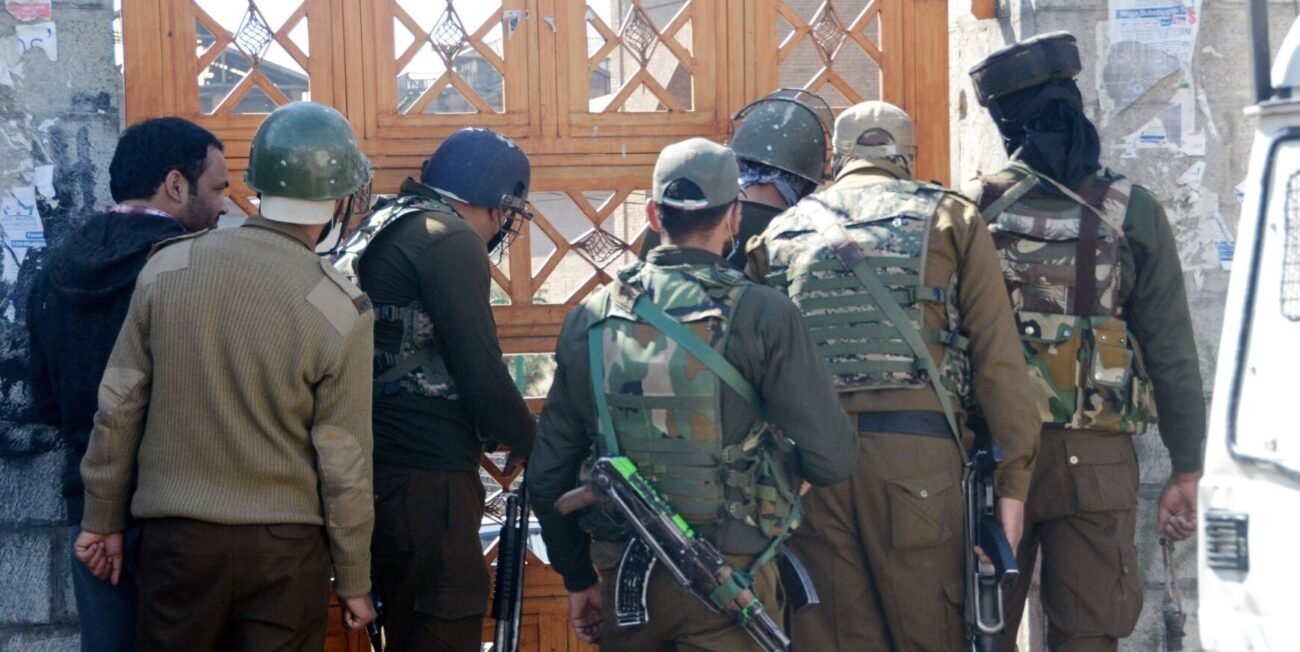 Security forces take shelters behind the Grand Masjid as the protestors threw stones on them, in Srinagar on Mar. 5. (ANI photo)

The decision was followed up with a sharp reaction from India, which noted with concern attempts by vested interests to misrepresent Jammu and Kashmir’s rich cultural and social mosaic to divide the people, according to a Press Trust of India report.

“We have seen the New York Assembly Resolution regarding Kashmir American Day,” a spokesperson of India’s Embassy in Washington said in the report. “Like the U.S., India is a vibrant democracy and the pluralistic ethos of 1.35 billion people are a matter of pride. India celebrates its diversity and rich cultural mosaic, including in Jammu and Kashmir, which is an integral and inalienable part of India,” it said.

“We note with concern the attempt by vested interests to misrepresent the rich cultural and social mosaic of Jammu and Kashmir to divide the people,” the spokesperson added. “We will engage with the elected representatives in the New York State on all matters concerning India-U.S. partnership and the diverse Indian diaspora.”

The resolution, sponsored by Assemblymember Nader Sayegh and 12 other lawmakers, states that the Kashmiri community has overcome adversity, shown perseverance and established themselves as one of the pillars of the New York immigrant communities, according to the report.

It adds that the State of New York endeavors to champion human rights including the freedom of religion, movement and expression for all Kashmiri people, which are embedded within the U.S. Constitution, through the recognition of diverse cultural, ethnic and religious identities.

The legislative resolution, adopted in the New York State Assembly on Feb. 3, called on Cuomo to proclaim Feb. 5, 2021, as Kashmir American Day in the State of New York.

In a tweet, Pakistan’s Consulate General in New York acknowledged the role of Sayegh and The American Pakistani Advocacy Group towards the adoption of the resolution.

Pakistan has been unsuccessfully trying to drum up international support against India for withdrawing Jammu and Kashmir’s special status on Aug. 5, 2019, and bifurcating it into two union territories — Jammu and Kashmir and Ladakh, the PTI report said.

India has firmly told Pakistan that the Union Territory of Jammu and Kashmir has been, is, and shall continue to be an integral part of India. New Delhi has maintained that issues related to Jammu and Kashmir are internal matters to India, it said.

India has categorically told the international community that the scrapping of Article 370 of the Constitution was its internal matter. It also advised Pakistan to accept the reality and stop all anti-India propaganda, the report said.