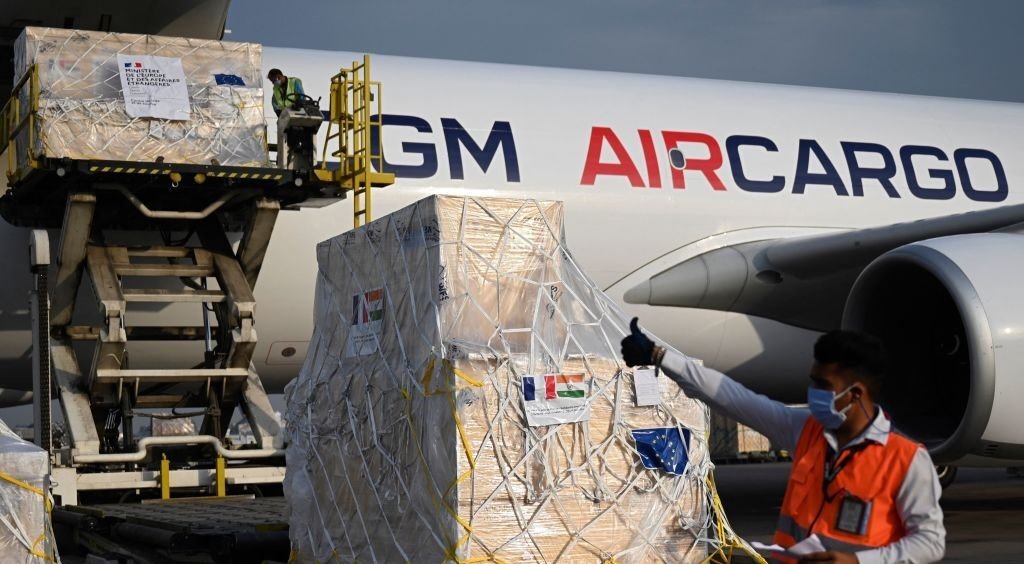 Ground staff unload the Covid-19 coronavirus medical supplies from France, upon the arrival of a cargo plane at the Indira Gandhi International Airport in New Delhi on May 2, 2021. (Money Sharma/AFP via Getty Images)

NEW DELHI – Amid the ongoing COVID-19 crisis, India on May 2 received several essential medical supplies and equipment from France to help fight the second wave of the coronavirus.

According to a press release, this airfreight is the first phase of France’s solidarity mission. Furthermore, a second delivery of oxygen generators and medical equipment is underway due to the numerous contributions made by French companies in India with the active involvement of the Indo-French Chamber of Commerce and Industry).

Moreover, in the following days, French company Air Liquide will begin shipments of several hundred tons of oxygen through a dedicated logistical bridge organized by both governments and implemented with the Indian armed forces.

According to the release, the oxygen plants will be delivered to eight Indian hospitals, including six in Delhi, one in Haryana and one in Telangana, based on needs as identified by the Indian authorities.

The 28 ventilators and 200 electric syringe pumps will be distributed to several hospitals based on needs to enhance their ICU capacities.

This special cargo flight has been chartered free of charge by the French shipping and logistics group CMA CGM through its air cargo division. Alongside CMA CGM, many other French companies present in India have stepped up to pool their contributions and resources with the French government to carry out this exceptional solidarity mission. This support also falls within the framework of the EU Civil Protection Mechanism.

“We stand by India in these difficult times, just as India has always stood by France. In Spring 2020, when French hospitals were facing acute shortages, India provided lifesaving help through the export of critical medical drugs. The French people have not forgotten. India has, in fact, been at the forefront of international cooperation against the pandemic, including through sharing its massive vaccine production capacity with the countries most in need,” said the Ambassador of France to India Emmanuel Lenain on this occasion.

Quoting French President Emmanuel Macron, Lenain said that solidarity is at the heart of the strategic partnership between France and India and that a partnership between sovereign countries that have built an exceptional mutual trust and work together to enhance each other’s strategic autonomy.

On April 27, Macron had conveyed the message of solidarity in Hindi via a social media post. “No one is untouched by the epidemic we are going through. We know that India is going through a difficult period. France and India have always been united: we are ready to provide our support,” he had said.

Meanwhile, the MEA also announced that India has received a shipment of 9,000 vials of Remdesivir from Belgium.

Earlier on May 1 night, India received several medical supplies from countries including Germany, the United States and Uzbekistan.

A flight from the U.S. carrying 1,000 oxygen cylinders, regulators and other medical equipment landed in India May 1 night, the Ministry of External Affairs informed.

“Cooperation with US continues! Another flight from USA arrives carrying over 1000 oxygen cylinders, regulators & other medical equipment. Third shipment in a period of 2 days adding to our oxygen capacities. Grateful to US for its support,” tweeted Arindam Bagchi, official spokesperson, Ministry of External Affairs. Earlier on April 30, the U.S. had dispatched the third set of its several emergency COVID-19 relief shipments to India.