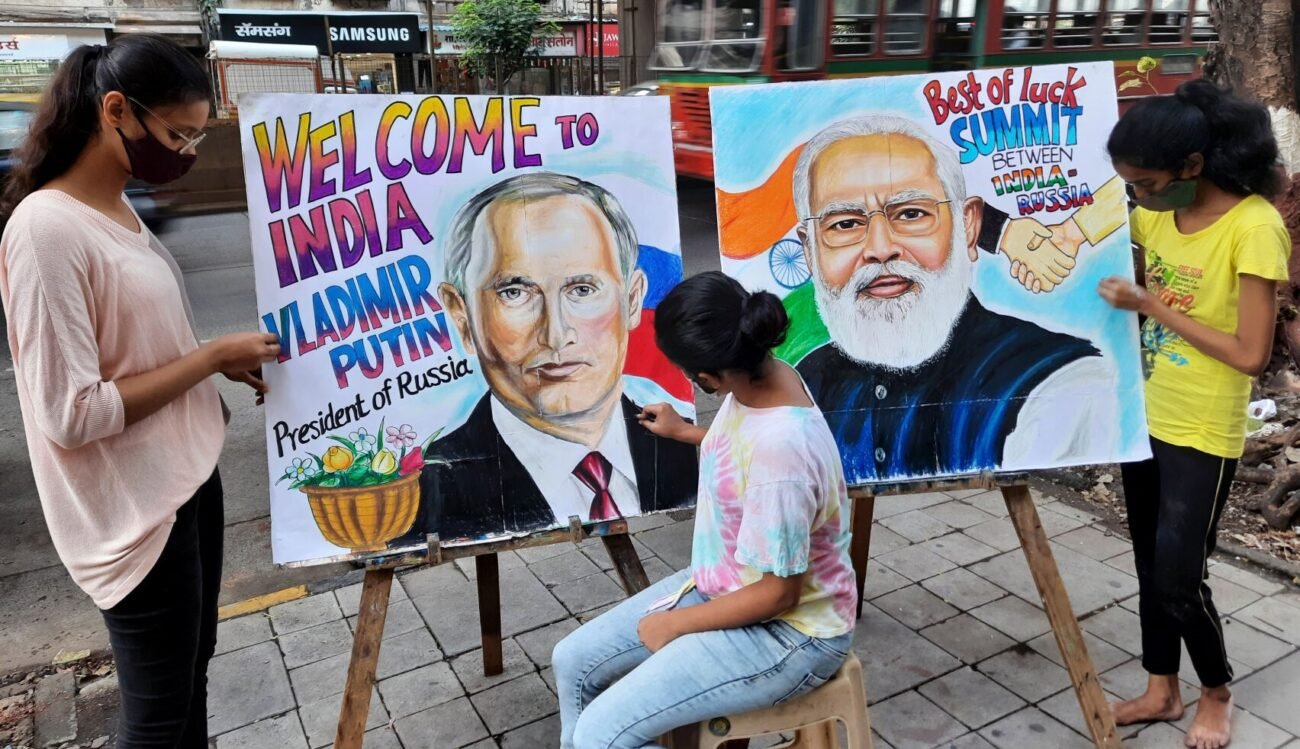 Gurukul students paint a portrait to welcome Russian President Vladimir Putin ahead of his visit to India, in Mumbai on Dec. 5. The students also made the portrait of Prime Minister Narendra Modi. (ANI photo)

NEW DELHI – India and Russia on Dec. 6 signed a record 28 MoUs across a wide range of sectors including trade, energy, culture, intellectual property accountancy and education.

Besides 28 MoUs, New Delhi and Moscow also signed a program of cooperation in the field of defense for the next 10 years from 2021 to 2031.

“There were excellent discussions between the two leaders. This is President Putin second visit out of Russia since COVID-19 pandemic began. The only visit he has undertaken was the brief visit to Geneva for the Russia-U.S. summit,” he said.

“The fact that the Russian president has decided to visit India for the annual summit exceptionally is an indication of the importance he attaches to the bilateral relationship and also his personal rapport,” he added.

Noting that “record number 28 MoUs were concluded during the visit,” Shringla said the “agreements were government-to-government and business-to-business, including those involving public sector units.

“The diversity of agreements and MoUs signed today shows the multifaceted nature of our bilateral partnership,” he said.

IANS adds: India and Russia inked four agreements on Dec. 6, including a contract for procurement of over 600,000 AK-203 assault rifles.

The decision was taken during the meeting of the inter-governmental commission on military and military-technical cooperation in the national capital, which was chaired by Defense Minister Rajnath Singh and his Russian counterpart General Sergey Shoigu.

In his opening remarks, Singh termed Russia as India’s long-standing, special and privileged strategic partner, adding that the relations between the two countries are time-tested and based on common interests in multilateralism, global peace and prosperity, mutual understanding and trust, etc.

Singh appreciated Russia’s strong support for India and stressed that the close cooperation is not targeted against another country.

He expressed hope that this cooperation will bring peace, prosperity and stability in the region, adding that defense cooperation is one of the most important pillars of bilateral partnership.

“The India-Russia inter-governmental commission on military and military-technical cooperation has been a well-established mechanism for the last two decades. It provides a platform to discuss and implement mutually agreed agenda for defense cooperation. You have been actively involved in these discussions for several years. I wish to acknowledge with respect your valuable personal contribution to strengthen our bilateral defense cooperation,” Singh told Shoigu.

Singh further said that the summit meeting between Russian President Vladimir Putin and Prime Minister Narendra Modi once again reconfirms the depth and critical importance of special and privileged strategic partnership between India and Russia in the emerging geo-political circumstances.

He described the first-ever India-Russia 2+2 ministerial dialogue as a special initiative taken by the leaders of the two countries, which signals the higher relevance and necessity for cooperation between the two nations.

At the end of the meeting, both countries signed four agreements, contracts and protocol.

While the first three documents were signed by the officials of two sides, the protocol was signed by the defense ministers of India and Russia.

The protocol on amending an agreement between India and Russia on cooperation in the field of Kalashnikov Series small arms manufacturing dated Feb. 18, 2019 took place.

Contract for procurement of 601,427 AK-203 Assault rifles through the Indo-Russia Rifles Private Limited was inked on the occasion.

The meeting was followed by the maiden 2+2 dialogue between India and Russia.