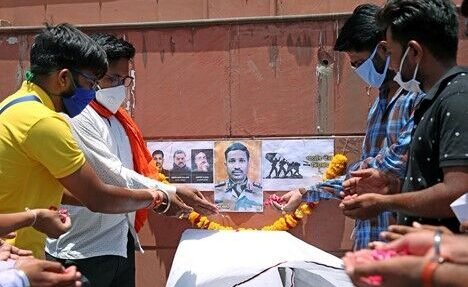 File photo of Indians paying floral tribute to 20 soldiers who were martyred in the violent face-off between India and China at LAC in Ladakh, at Shaheed Smarak, in Ajmer, Rajasthan, June 17, 2020. (ANI photo)

Talks between Indian and Chinese army commanders to disengage troops from key areas along their border ended in a stalemate earlier this month, failing to ease a 17-month standoff that has sometimes led to deadly clashes.

Chinese lawmakers approved the law at a meeting on Oct. 24 of the standing committee of the National People’s Congress.

Bagchi said India and China earlier agreed to seek a fair and mutually acceptable resolution of their border dispute.

He expressed hope that the law would not affect arrangements earlier reached by the two sides on the boundary dispute or threaten peace and tranquility in border areas.

There was no immediate comment from China on India’s statement.

Both countries have stationed tens of thousands of soldiers backed by artillery, tanks and fighter jets along their de facto border, called the Line of Actual Control, in the Ladakh region. Last year, 20 Indian troops were killed in a clash with Chinese soldiers involving clubs, stones and fists along the disputed border. China said it lost four soldiers.