HomeGlobal‘India Sweets and Spices’ is a Celebration of Courage, Joy, and Staying True to Yourself’, Says Filmmaker Geeta Malik 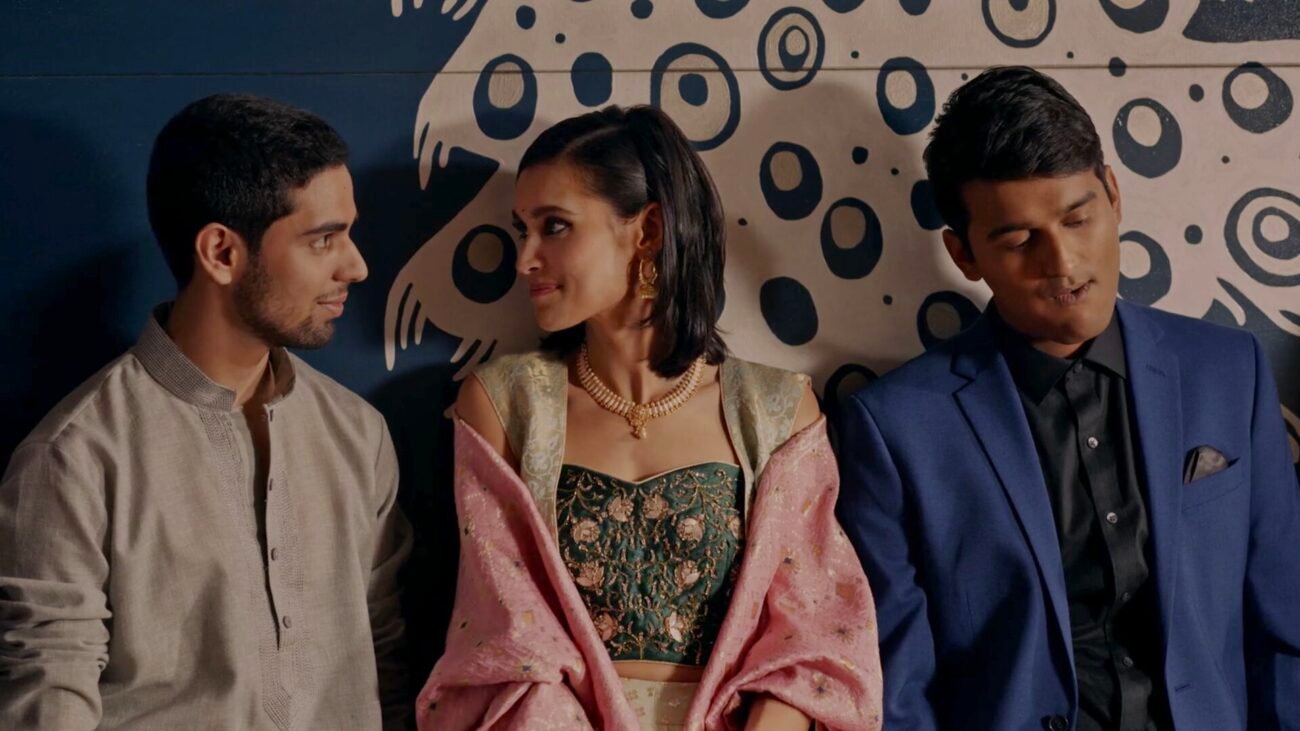 In a scene from Indian American director/writer Geeta Malik’s film, “India Sweets and Spices,” Sophia Ali (c), who stars as Alia, has the attention of both Rish Shah, who plays Varun (l), and Ved Sapru, who portrays the role of Rahul (r), at a party in her suburban New Jersey home. The film will be released in theaters Nov. 19. (photos courtesy of SK Global Entertainment)

“Allow me a sentimental ‘How It Started’ (desperately, exhaustedly trying to write this movie while my daughter napped on my chest)/’How It Ended’ (toasting my first film to open in theaters a week from today)!” This is how Indian American filmmaker Geeta Malik succinctly summed up her feelings on Twitter about her passion project, “Indian Sweets and Spices,” which is finally making its way to audiences.

The dramedy, set against the backdrop of an Indian American family, will be released in theaters Nov. 19, and is probably Malik’s most personal film.

“The idea (for the film) came from my own experiences growing up in Colorado and going to countless dinner parties with my parents! My childhood memories are mostly fond ones — the amazing food, getting dressed up in our Indian outfits, playing in the basement with the other little kids, the general excitement and fun of it all — but as I got older, and I was expected to participate more, I remember hearing plenty of aunties and uncles bragging and gossiping,” Malik told India-West. “There was a lot of support in the community, culturally, but also a lot of judgment and one-upmanship.”

Malik continued: “When I first started writing the script, I had planned on writing just a simple comedy, but as I wrote, I started digging deeper into these characters and their motivations. And then, I had my own children, and the script evolved into more of a mother-daughter, coming-of-age story. It started out just as a lighthearted comedy, and then became something far more meaningful to me.”

Written and directed by Malik, the film debuted at the 2021 Tribeca Film Festival, and since then, has been receiving glowing reviews on the festival circuit. Bleecker Street secured the U.S. rights to the film this year.

Sophia Ali stars as Alia Kapur, who returns to her Indian American family’s posh suburban New Jersey home after a year away at college and upends their well-ordered life with her newfound independence. After befriending Varun (Rish Shah), the handsome son of the new owners of the local Indian grocery, she invites his family to a weekly dinner gathering with her parents’ wealthy friends.

She is shocked to learn that her perfectionist mother Sheila (Manisha Koirala) has a previous connection to Varun’s mother Bhairavi (Deepti Gupta). Alia’s surprise turns to indignation when she uncovers secrets about both her parents that push her toward a daring and transformative confrontation.

Malik shared that while the movie draws inferences from her own life and her own experiences, the specific situations and characters in the movie are fictional.

“I think the most fun I had was having Alia say things to her aunties and uncles that I could never dare to say! And I was especially inspired by many of the women in my life, especially the strength that they showed in the face of certain hardships,” said Malik.

As they say, you can’t rush art. In Malik’s case, it’s been a very long, very challenging journey, but an “incredibly rewarding” one as well.

“I started writing the first draft in 2011, then had two kids in two years, and I put the script away for a very long time! I started looking at it again more seriously in 2015,” Malik recalled to India-West.

In 2016, after the script won two major screenwriting competitions, the Academy Nicholl Fellowships in Screenwriting and the Austin Film Festival Feature Comedy Screenplay award, she began developing it as a director with SK Global and Madison Wells Media. The film was shot in the spring of 2019 and the post-production work concluded during Covid in 2020.

Finding Bollywood actors to play the roles of Sheila (Koirala) and Ranjit (Adil Hussain), the parents, was always Malik’s plan. However, she never imagined that these two actors would give a nod to the roles.

“I had made a short list of potential actors from smaller films that I thought might be interested in seeing the script, and then our producer mentioned Manisha as a possible ‘Sheila,’ and I threw my list away!” Malik quipped. “I absolutely jumped at the chance to get in touch. I’m a huge fan — she’s one of my favorite actresses of all time — and I was thrilled when the script resonated with her.”

Malik had met Ali years ago at a casual table read of her script and was blown away with her performance. So when the time came to cast that role, she made sure Ali’s name was part of the mix.

“We looked at hundreds of tapes, but Sophia was always at the top of my list, and after she nailed her audition, it was a done deal,” she added.

Buoyed up by rave reviews, Malik now hopes viewers see that even though this is a film set in “our specific community,” the themes are universal.

“The film is a coming-of-age not just for Alia, but also for Sheila, and, in a way, the whole community. The film is a celebration of courage, joy, and staying true to yourself. I hope people feel excited, inspired, and uplifted after they watch,” Malik told India-West.

Be it “Aunty Gs,” “Troublemaker,” or “Shameless,” Malik said she gravitates toward telling stories about women, and particularly about South Asian women, because she always wanted her own experiences reflected on-screen.

And employing humor as a tool to amplify a message almost always works and who knows it better than Malik who is recognized for her directorial brilliance and dry-wit humor.

“I try to tell stories that matter, but my natural inclination is toward comedy, so even the more dramatic themes of my films are filtered through a somewhat lighter, funnier lens,” Malik told India-West. “My favorite films are ones that leave me feeling uplifted and hopeful, so that’s what I try to do in my own work as well.”

Representation matters! For all the talk about an inclusive Hollywood, the change has been rather slow, and a lot still needs to be done to level the playing field for women of color. Malik, who received her Master of Fine Arts degree from UCLA’s graduate film program in directing, concurred, noting that things have changed for the better since she graduated film school, but the industry still has a long way to go.

“We’re starting to see more representation in the creative space with writers, directors, and actors, but the people who have the money, who hold the most power — to make decisions, to have the final say as producers and executives — are still very non-diverse,” Malik stated to India-West. “So, I hope that things continue to progress and that we continue to support each other and rise up in the ranks, because without that power, we’ll keep getting stuck.”

And when it comes to improving the representation in Hollywood, Malik believes that there’s strength in numbers and power in perseverance.

“I sound a little glib when I say this, but truly — just don’t give up. This industry works very hard to weed people out, and it’s vital to trust your own voice in the face of constant rejection. Our voices are important, our stories are important, and the more of us that are out here, fighting together, the stronger we are,” she told India-West.