HomeIndiaIndia and the worldIndia To Assume Presidency Of UNSC This Week

India To Assume Presidency Of UNSC This Week 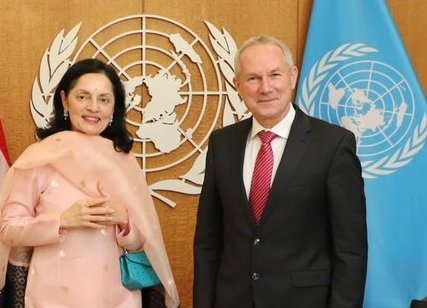 India To Assume Presidency Of UNSC This Week

NEW YORK, NY (IANS) – As India prepares to assume the presidency of the Security Council this week, India’s Permanent Representative to the UN, Ruchira Kamboj has met with General Assembly President Csaba Korosi, according to his Spokesperson Paulina Kubiak.

Kubiak said the meeting took place on November 28 with India set to take the rotating presidency of the Security Council for the month of December.

“I look forward to the month ahead,” he added.

New Delhi has advocated closer coordination between the Council dominated — and often paralyzed — by the five permanent members and the General Assembly where the 193 UN members are represented equally.

India will be concluding its stint as an elected member of the Security Council next month presiding over the council for the second time during its two-year term.