HomeIndiaIndia to Repeal Controversial Farm Laws that Led to Protests 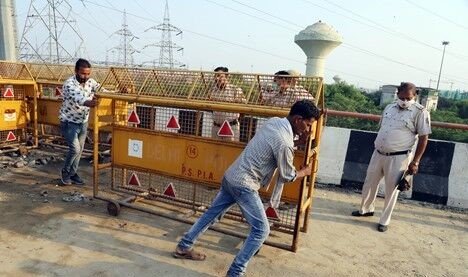 Police personnel supervise the removal of barricades at the Ghazipur border where farmers were protesting against three farm laws, in New Delhi on Oct. 29. Prime Minister Narendra Modi’s decision Nov. 19 to withdraw the controversial farm laws will be seen as a political masterstroke ahead of some key state polls. (ANI photo)

NEW DELHI (AP) — In a surprise announcement, Indian Prime Minister Narendra Modi said Nov. 19 his government will withdraw the controversial farm laws that prompted year-long protests from tens of thousands of farmers and posed a significant political challenge to his administration.

Modi made the announcement during a televised speech that was broadcast live. He urged the protesters to return home and said the constitutional process to repeal the laws will begin in December when parliament sits for the winter session.

“Let us make a fresh start,” Modi said during the address.

The announcement came on the day of the Guru Purab festival, when Sikhism founder Guru Nanak’s birthday is celebrated, and ahead of key elections in states like Uttar Pradesh and Punjab. Most of the protesters are Sikh farmers from Punjab.

The laws were passed in September last year and the government had defended them, saying they were necessary to modernize India’s agricultural sector and would boost production through private investment. But the farmers protested, saying the laws would devastate their earnings by ending guaranteed pricing and force them to sell their crops to corporations at cheaper prices.

These perceived threats to their income terrified India’s farmers, who mostly work on a small scale: More than two-thirds of them own less than 1 hectare of land.

Clauses in the legislation also prevented farmers from resolving contract disputes in court, leaving them with no independent means of redress apart from government-appointed bureaucrats.

Samyukt Kisan Morcha, the group of farm unions organizing the protests, said it welcomed the government’s announcement. But the group said the protests would continue until the government assures them guaranteed prices for certain essential crops — a system that was introduced in the 1960s to help India shore up its food reserves and prevent shortages.

The government had so far yielded very little to the drawn-out demonstrations that led to unprecedented farmer protests across India and posed a major challenge to Modi, who swept the polls for the second time in 2019.

Modi’s decision will be seen as a political masterstroke ahead of some key state polls, particularly in Punjab, where growing alienation of the Sikh community over the laws was palpable.

Initially, Modi’s government had tried to discredit the Sikh farmers by dismissing their concerns as motivated by religious nationalism. Some leaders in Modi’s party called them “Khalistanis,” a reference to a movement for an independent Sikh homeland called “Khalistan” in the late 1980s and early 1990s.

In November last year, the farmers escalated their movement by hunkering down on the outskirts of New Delhi, where they have camped out for nearly a year, including through a harsh winter and a coronavirus surge that devastated India earlier this year.

Dozens of farmers died due to suicide, hostile weather conditions and COVID-19 during the demonstrations.

Opposition leaders, who earlier called the laws exploitative and supported the protests, congratulated the farmers.

“The country’s farmers, through their resistance, made arrogance bow its head,” tweeted Rahul Gandhi, India’s main opposition party leader in Congress. “Congratulations on the victory against injustice!”

Farmers form the most influential voting bloc in India — and are often romanticized as the heart and soul of the nation.

Politicians have long considered it unwise to alienate them, and farmers are particularly important to Modi’s base. Northern Haryana and a few other states with substantial farmer populations are ruled by his party.