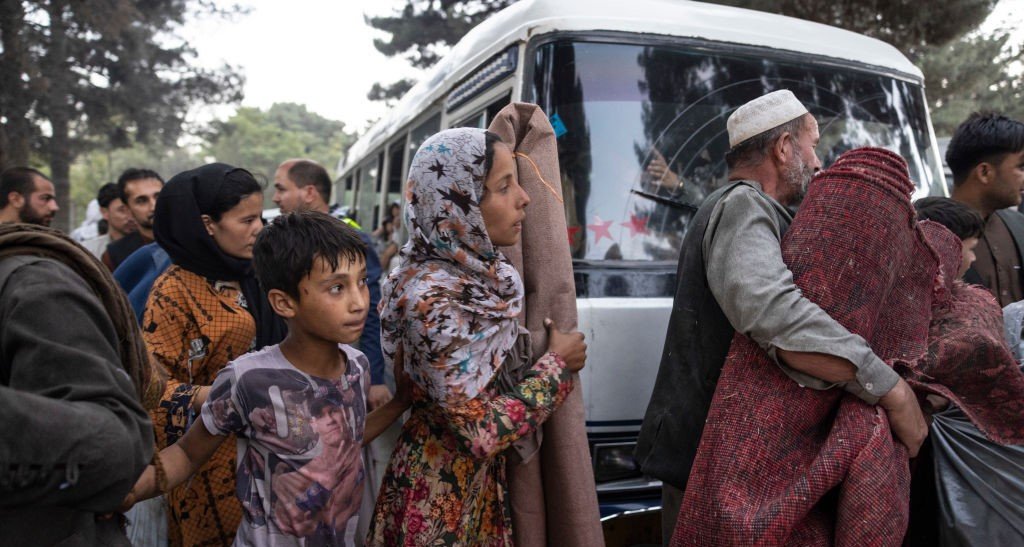 Displaced Afghans from the northern provinces are evacuated from a makeshift IDP camp in Share-e-Naw park to various mosques and schools on Aug. 12, 2021 in Kabul, Afghanistan. (Paula Bronstein/Getty Images)

NEW YORK – Under the looming threat of a Taliban takeover of Afghanistan, India has joined 11 countries to oppose any military solution to the conflict in that country and declare it will not recognize any government imposed by force, according to U.S. State Department spokesperson Ned Price.

He told reporters Aug. 12 that India participated in a meeting hosted by the U.S. and Qatar at which the participating countries “agreed, first and foremost, that the peace process needs to be accelerated. And they also agreed, importantly, that they will not recognize any government that is imposed through military force.”

Significantly, Pakistan, which has patronized the Taliban, was also at the meeting and Price gave the impression that it was also in agreement with the declaration.

China and Turkey, as well as the United Nations and the European Union, were among the participants at the Doha meeting and they met also with the representatives of the Afghan government and the Taliban.

Ignoring the peace deal with President Joe Biden’s administration, the Taliban has been sweeping though Afghanistan, effectively taking Kandahar and Herat by Aug. 12 night and imperiling the capital Kabul ahead of the U.S. deadline to pull its troops out of the country by the end of the month.

Reversing the drawdown of troops, the U.S. announced Thursday that it was sending about 3,000 Army and Marine troops to help with the evacuation of its embassy personnel in Kabul.

“We expect to draw down to a core diplomatic presence in Afghanistan in the coming weeks. In order to facilitate this reduction, the Department of Defense will temporarily deploy additional personnel to Hamid Karzai International Airport,” Price told reporters.

But he insisted that the U.S. will continue to have a diplomatic presence in Kabul.

“Let me be very clear about this: The embassy remains open and we plan to continue our diplomatic work in Afghanistan,” he said, adding, “Additionally, we will continue our focus on counterterrorism.”