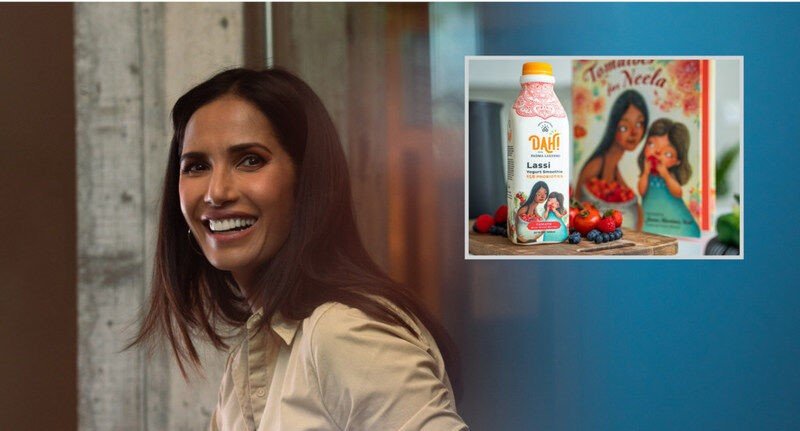 Indian American author, TV host, producer and culinary expert Padma Lakshmi has joined DAH!, a maker of premium, slow-cultured yogurts, as a board adviser and brand partner, the company announced Nov. 10, according to a PRNewswire press release.

Based in Leominster, Mass., DAH! was founded by Indian American Jaidesh Sethi and Ajeet Burns.

Lakshmi will work hand-in-hand with the executive team and board of directors to advise on the overall direction of the company, brand equity and innovation strategy, and lend her expertise to the research and development department to help craft and test new products and flavors.

“I think DAH!’s Lassi (yogurt smoothie) is special because it has more probiotics and less sugar than a lot of drinkable yogurts. I’m looking forward to sharing this with the American public because it may be something new for them,” said Lakshmi in the release. “It can play a vital role in gut health, nutrition, in getting enough protein, and in being a great addition to our diet that’s just plain delicious.”

The same day, DAH! was set to release its Tomato with Mixed Berries Lassi, a new product crafted in partnership with Lakshmi and inspired by her New York Times bestselling children’s book “Tomatoes For Neela.”

DAH!’s Lassi varieties are made with real fruit and pack 60 billion live probiotics per 32-oz. bottle, making them not only delicious but also excellent for digestive health, noted the release. Tomato with Mixed Berries will join DAH!’s existing portfolio of Lassi yogurt smoothies, including Alphonso Mango (with mangoes sourced from India), Plain (with no added sugar), Vanilla with Cardamom, Strawberry with Mint and Peach with Honey.

“We are beyond honored for Padma to join our team, and bring along her wealth of food knowledge and understanding of consumer behavior,” said Pamela Goldberg, CEO and board member of DAH!. “With Padma’s passion and partnership, we have no doubt that Lassi will soon be a household name.”

According to the company, DAH! merges the time-tested, ancient wisdom of India’s culinary traditions with the precision of modern methods and technologies to produce premium, slow-cultured products high in probiotics in dairy and plant-based offerings.

Lakshmi is an Emmy-nominated food expert, television producer, host and a New York Times best-selling author. She is the creator of the Hulu series “Taste the Nation,” winner of the 2021 Critics Choice Award. She is also co-founder of the Endometriosis Foundation of America and an American Civil Liberties Union Artist Ambassador for immigrants’ rights and women’s rights. Lakshmi has been appointed a Goodwill Ambassador for the United Nations Development Program.