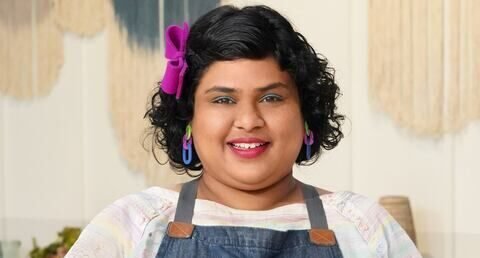 Indian American designer Kaviya Ravi is among the contestants on the NBC competition series, “Making It.” (nbc.com photo)

Kaviya Ravi creates things for a living. Working as a window display coordinator for Anthropologie, the Indian American designer/entrepreneur infuses her love of bright colors in the store fronts. But now she is showcasing her talent on national TV.

Ravi is among the pool of contestants on the third season of “Making It,” the uniquely lighthearted competition series celebrating creativity and craftiness, which premiered on NBC June 24.

In the show, hosted by Amy Poehler and Nick Offerman, the best makers from all over the country compete each week as they take on complicated do-it-yourself crafts to determine who the best maker is.

In the six-episode competition, eight of the most talented makers take on a variety of handmade projects with the hopes of impressing Poehler, Offerman and the expert judges, Simon Doonan and Dayna Isom Johnson.

Every show revolves around a central theme that draws inspiration from hugely popular, nationwide trends in crafting and DIY.

Each episode consists of two projects that allow the makers to demonstrate their specialized talent while sharing skilled insights and touching personal stories.

The “faster-craft” round is a timed challenge that tests their ability to not only work quickly but imaginatively as well. In “master craft collection,” competitors need to use their expertise and get inventive in order to assemble a winning craft that fits the theme of that week.

A first-generation Indian American, Ravi, who holds a BFA degree in interior architecture, currently lives in Louisville, Kentucky. Coming from a traditional Indian family, she had an arranged marriage 15 years ago when she was 21. As her biggest supporter, Ravi’s husband, Guru, is largely the reason she is able to spend her days creating.

“I grew up in a culture where women had a certain place in society, you were in the background. My self-confidence and self-esteem really took a hit. My husband saw in me what I didn’t see in myself,” a teary-eyed Ravi told Poehler and Offerman, adding that she got her degree in biochemistry from India.

Ravi said she was blessed to marry someone who believed in her artistic dreams.

“Guru pushed me to become a maker. He is my biggest fan and champion,” she said.

She also revealed that after high school she got accepted into an art school, but her mother kept it from her.

“Years later, my mom told me that she tore it up because she was not happy with it. But it does make a funny story at this point,” she said.

“My dream if I won the $100,000 would be to open my own store,” Kavi told the Courier Journal. “I would love to have a place of my own to create and sell my work and carry the work of other creatives.”

Ravi’s bright and colorful jewelry, baskets and home furnishings are available for purchase on her website Khromophilia on Etsy.