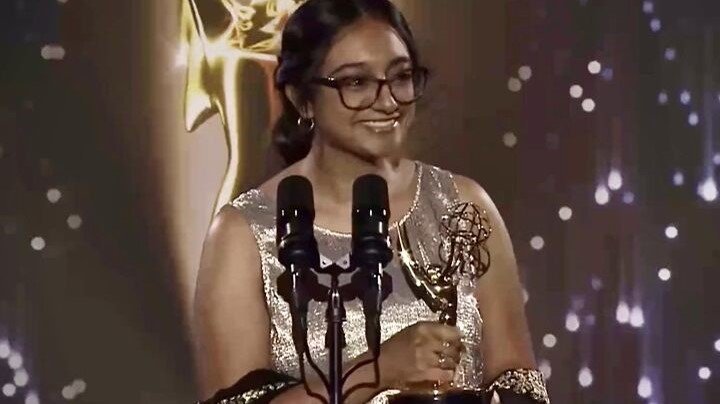 LOS ANGELES, Calif. – Indian American journalist Simrin Singh, 22, received two Los Angeles Area Emmy awards for her production and editing work at an event held at the NoHo Arts District here on July 24. The event was streamed on Emmys.com/LA from the Television Academy.

Singh received one award for Outstanding Entertainment News Story for a piece she edited, “Good Medicine,” which was about Native American rapper Supaman. Singh tweeted, “I was thrilled to be an editor on Good Medicine, a story about fighting injustice from a place of love. Thank you @Supamanhiphop for sharing your story with us,” she said.

The second Emmy she received was for the Outstanding News Series “FACEism,”whichis a multi-part series that covers the history and treatment of minority groups in the U.S. Helmed by the well-known anchor at ABC7’s Eyewitness News, David Ono, the stated mission of the program in Ono’s words is to: “Expose our often-ignored history, erase stereotyping and move toward a better understanding of each other.” About Ono, Singh tweeted, “Endlessly grateful to @abc7davidono.”

Singh is a graduate of the Annenberg School of Journalism at the University of Southern California. She works as a writer for BuzzFeed.

In an email to India-West, she said she is, “most interested in leveraging new digital platforms and technologies as tools for comprehensive storytelling,” and aims to share stories that take into account the perspectives of the diverse population the news serves.