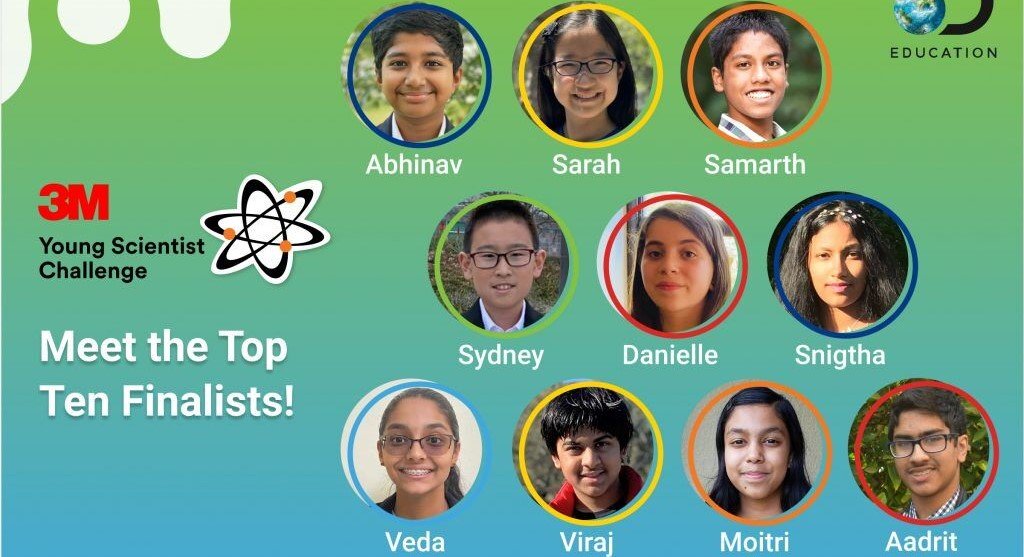 As the nation’s premier middle school science competition, the 3M Young Scientist Challenge features outstanding innovations from young scientists that utilize the power of STEM to improve the world, a news release said.

“The 3M Young Scientist Challenge demonstrates the transformative power of young minds to address global challenges by combining their unique and diverse perspectives on innovation, creativity, and a passion for a better world,” said Denise Rutherford, senior vice president and chief corporate affairs officer, 3M. “The 2021 finalists, honorable mention recipients prove the efficacy of STEM thinking. We are proud of this year’s competitors and remain committed to building greater STEM-equity that unlocks the power of people, ideas and science and imagines what’s possible,” Rutherford added.

This year’s finalists and honorable mention recipients – 14 students ranging in age from 12-14 – identified an everyday problem in their community or the world and submitted a one- to two-minute video communicating the science behind their solution, it said.

An esteemed and diverse group of judges, including 3M scientists and leaders in education from across the country, evaluated entries based on creativity, scientific knowledge, and communication effectiveness, the release added.

The competition event will take place from Oct. 18-19 at the 3M Innovation Center in Minneapolis.

The top 10 2020 3M Young Scientist Challenge finalists and the four honorable mention recipients include students from public and private schools across the U.S. These projects were selected for their unique and innovative concepts innovation and effective communication by the recipient.

Each finalist will be evaluated on a series of challenges, including a presentation of their completed innovation. Each challenge will be scored independently by a panel of judges.

The grand prize winner will receive $25,000, a unique destination trip, and the title of America’s Top Young Scientist.

In its 14th year, the 3M Young Scientist Challenge continues to inspire and challenge middle school students to think creatively and apply the power of STEM to discovering real-world solutions.

America’s Top Young Scientists have gone on to give TED Talks, file- patents, found nonprofits, make the Forbes 30 Under 30 list, ring the bell at the New York Stock Exchange, and exhibit at the White House Science Fair. These young innovators have also been named Time Magazine’s first Kid of the Year, featured in The New York Times Magazine, Forbes, Business Insider, and on national television programs such as Good Morning America, CNN’s Cuomo Prime Time, The Ellen DeGeneres Show and more, according to the release.

The award-winning 3M Young Scientist Challenge supplements the 3M and Discovery Education program – Young Scientist Lab – which provides no-cost dynamic digital resources for students, teachers, and families to explore, transform, and innovate the world around them.