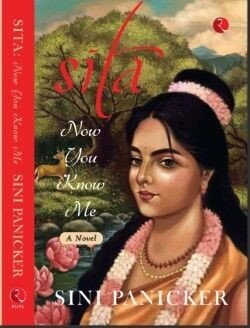 NEW DELHI – When Indian American writer Sini Panicker, a trained chemist who is classifies heroin for the United States government, began her research into the Ramayana in early 2018, the #MeToo Movement was extremely popular and highly successful in the United States. And, in her debut novel, “Sita: Now You Know Me,” Panicker was inspired by these MeToo voices to give her protagonist a spirited and resilient voice befitting the present-day affairs that occupy the news cycles and social media.

By the time Panicker began her final editing process with Rupa Publications on the novel, the U.S. and the world had been changed considerably. Black Lives Matter has gained significant strength; millions and millions of people have been protesting in countless cities and towns all over the world against racism and social injustice. In addition, a pandemic was raging on, killing people daily in several thousands, across the continents. Isolation and loneliness. These two words have started to define life for almost everyone on this earth, regardless of their race, age, nationality or faith. In an extremely cruel and punishing manner, these words began to define death, too, for millions.

“I thought the world in the novel is surreal. It is an ancient world, it is an imaginary world, dating back to two millennia or more, where we, the good-natured humans fight the ghastly demons. But no. The world outside – the living, breathing world of ours – is the surreal one,” Panicker, whose normal topics of engagement are organic chemistry, forensic sciences, heroin investigations, and intelligence information on global heroin trafficking, told IANS in an interview.

“There has been utter chaos and deadly fear from the virus. There has been torture and pain inflicted upon humans by fellow humans, just because they could. All of this began to make me feel like our world exists on another unfamiliar and abnormal realm,” she added.

“The George Floyd video showed the demons are still here, that they are in us. We are the demons. A microorganism, a simple messenger RNA, is powerful enough to teach us, the egotistical, narcissistic human race, a few tough lessons on nature and humility. I compared and contrasted the world in my novel, to the world we live in, throughout the editing process in 2020. Of course, there were plenty of chances for me to ponder these things, because of the isolated and lonely life under the pandemic,” Panicker explained.

Coincidentally, the most continual feelings Sita experiences in the novel are isolation and loneliness. The Dandaka exile is not a series of wonderful and joyful excursions to the hermitages for Ram, Lakshman, and Sita in the book. The three of them are separated from the rest of the world, from fellow humans, and they lead an insulated lonely life in the deep jungle for 13 long years; their struggles and depression are openly discussed in my novel. Then there is a year of loneliness and misery for Sita in Lanka, which is almost immediately followed by her isolated life at Valmiki’s ashram after Ram banishes her.

“I could not help but think about our current feelings, under the pandemic vs. the emotions detailed in the novel.

“I wrote this novel because of MeToo. MeToo is still happening. There are several movements occurring as we speak, under the umbrella term Black Lives Matter too. The pandemic is still not over. It seems like everyone and everything on this earth is a work in progress. And a novel, a short story or a poem often provides a great opportunity for us to reflect on this work in progress; on what we are and what we should be, about our past, present and future. I hope ‘Sita: Now You Know Me’ will provide such an opportunity for the readers,” Panicker elaborated.

The novel introduces the reader to a conflicted Sita, aged approximately 50, living like an ascetic at Sage Valmiki’s ashram. She is evaluating her prospects for the following day as she has been ordered by her husband King Ram to appear in his court in Ayodhya. Sita suspects that she will be asked to prove her chastity. Overwhelmed by an array of emotions – ranging from agony, resentment, and distrust, about the trial that occurs after long years of her punishment in exile – Sita realizes that in order to secure the future for her young sons, she has no choice but to appear in Ayodhya. The message from Ram, a husband whom she loves very deeply despite their estrangement, begins to torment Sita; and she reflects on her life’s events, a series of misfortunes that led her to the ashram.

Sita narrates her turbulent life in extensive detail, revealing her deepest desires, grief and horrors, as well as her profound love for Ram and for scripture. This Sita is deeply rooted in two major elements of her time: the agricultural practices that are further cemented by her connection to the mother earth and the magnificent era of debates on life and the cosmos, of the Vedas and Upanishads. We journey inside Sita’s mind, to the steely core which sustains her through a life of stark privation and abundant emotional riches. As she contemplates hymns and the very meaning of life, we see a woman evolved far beyond her time, a woman who speaks to us today, out of the narrative of one of the oldest epics of our world.

“While keeping the epic’s storyline mostly intact, I have changed some events and subplots, added new scenes or twists, and altered a few characters as I needed to narrate Sita’s story for contemporary readers,” Panicker said.

Sita journeys to Ayodhya and enters the palace to face her estranged husband and family. Instead of a formal trial, the reunion becomes highly emotional. Ram offers her a public apology and pleads with her to stay with him and their sons in Ayodhya. Despite her intense joy upon seeing Ram, the agony and resentment over Ram’s deceitful act cannot be forgotten or forgiven by Sita. To Ram’s utter shock and torment, Sita walks away from him boldly, with a plan to convince her boys to stay in Ayodhya, without her. However, the cyclonic storms of emotions that she has experienced lately become unbearable for her already weakened heart. She collapses and dies in the hands of Ram, as he laments, broken-hearted.

“Sita: Now You Know Me” is a novel that will stay etched in your mind forever.