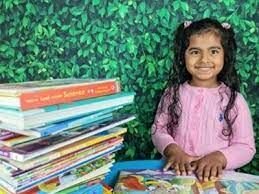 Indian American Kiara Kaur, 5, just got recognized on an international level as being a prolific reader.

The youngster read 36 books nonstop for over an hour. Kiara, who lives in the UAE, has entered the World Book of Records in London and Asia Book of Records for her feat, according to reports.

Calling her a “child prodigy,” the World Book of Records in London certified Kiara Kaur “for having specific ability to read non-stop 36 books in 105 minutes at the age of 4 years on 13th February.”

The Asia Book of Records has acknowledged that she “set a record for reading maximum number of books nonstop,” reports added.

Kiara, her parents say, spends most of her time reading. Over the last one year, she has read around two hundred books, according to the NDTV report.

“She used to read all the time, while in the car, even in the restroom and before going to bed. She is such an inquisitive child, we had to get her books every time we went go shopping,” explained her dentist mother Dr. Little Mahendra, who denies the child was pushed into setting this record, the report said.