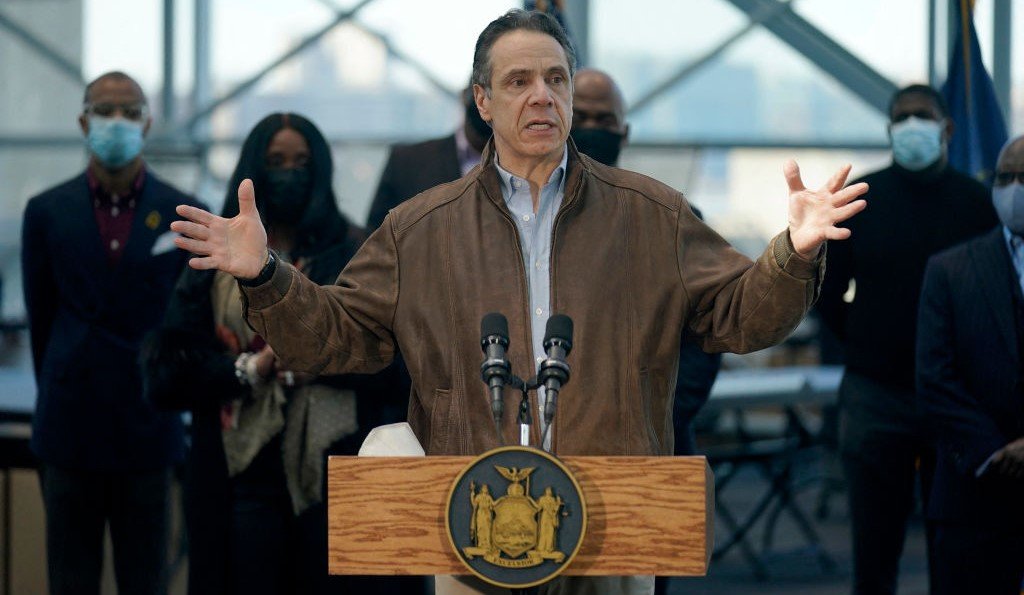 New York Governor Andrew Cuomo speaks at a vaccination site on March 8, 2021, in New York. State Assemblyman is one of over 50 legislators demanding the resignation of the governor over sexual harassment allegations and the nursing home death scandal. (Seth Wenig/POOL/AFP via Getty Images)

The Astoria Post reports that Democratic lawmakers released a joint statement March 11 demanding Cuomo resign and allow the lieutenant governor to take over for the remainder of the term.

“The budget, the fight against COVID-19, and restarting the economy all demand clear and trustworthy leadership,” they said in the statement. “In light of the governor’s admission of inappropriate behavior and the findings of altered data on nursing home COVID-19 deaths he has lost the confidence of the public and the state legislature, rendering him ineffective in this time of most urgent need.”

They published the statement after a sixth woman, an aide to the governor, came forward accusing him of inappropriate behavior. The details of this woman’s experience were published by the Times Union March 10.

The woman told the Albany newspaper that Cuomo had aggressively groped her underneath her blouse at the Executive Mansion late last year. The Times Union didn’t identify the woman, but said she is significantly younger than the 63-year-old governor, according to the report.

Her allegations are the most serious against the governor to date.

The Cuomo administration has also faced criticism for allegedly covering up the extent of the COVID-19 death toll at nursing homes across the state, the report notes.

Top aides had not included the deaths of nursing home residents who died in hospitals in the official death count — apparently fearing that the Trump administration would politicize the issue, it said.

The total number of nursing home deaths was finally released following a report by Attorney General Letitia James, who estimated the death toll was undercounted by as much as 50 percent. The number was revised in January from 8,500 to about 15,000 deaths, according to the Post.

The 55-plus lawmakers said they were both confident and grateful for James’ investigation, but said the governor should still resign before it is completed, it said.

“In the meantime, the governor needs to put the people of New York first,” they said. “We have a lieutenant governor who can step in and lead for the remainder of the term, and this is what is best for New Yorkers in this critical time. It is time for Governor Cuomo to resign.”

Absent from the signees was Jenifer Rajkumar. New York City Mayor Bill de Blasio also called for Cuomo, his longtime political foe, to resign— citing the most recent and serious groping allegation, which he called “disgusting.”