HomeIndiaIndia and the worldIndian Americans Express Sorrow and Solidarity in Aftermath of Georgia Murders; Suspect Not Yet Charged With Hate Crime

Indian Americans Express Sorrow and Solidarity in Aftermath of Georgia Murders; Suspect Not Yet Charged With Hate Crime 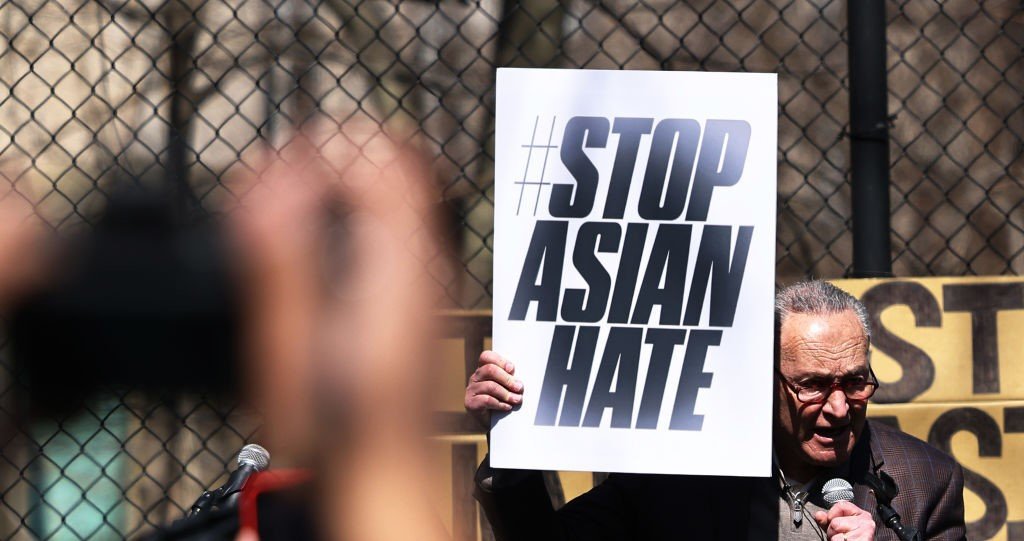 Indian Americans Express Sorrow and Solidarity in Aftermath of Georgia Murders; Suspect Not Yet Charged With Hate Crime

Senate Majority Leader Chuck Schumer (D-NY) holds up a sign that reads “Stop Asian Hate” as he speaks at a rally against hate in Columbus Park on March 21 in the Chinatown neighborhood of Manhattan in New York. A rally for solidarity was organized in response to a rise in hate crimes against the Asian American community since the start of the coronavirus pandemic in 2020. On March 16 in Atlanta, Georgia, a man went on a shooting spree in three spas that left eight people dead, including six Asian women. (Michael M. Santiago/Getty Images)

Several Indian American organizations expressed sorrow and solidarity in the aftermath of three separate shootings in Georgia, reportedly by the same young gunman, which took the lives of six Asian American women and two others.

The suspect, 21-year-old Robert Aaron Long, has been charged with eight counts of murder. He has not been charged with hate crimes, though many Asian American organizations believe Long was motivated by racial bias. A wave of anti-Asian American violence spread throughout the U.S. last year, after former President Donald Trump began to blame China for the COVID-19 virus, calling it the “Kung Flu,” the “Chinese virus,” and the “Wuhan flu.”

Stop AAPI Hate, a web portal developed by the Asian Pacific Policy and Planning Council, has recorded more than 3,800 reports of hate violence or hate speech over the past year. The portal allows victims and their families to report attacks in several Asian languages.

Elderly Asians and women have been targets for the majority of attacks. A poll soon to be released by the National Asian Pacific American Women’s Forum found that 55 percent — more than half of AAPI women — reported being affected by anti-Asian racism at least once in the past 2 years.

He then drove to the Gold Spa in Atlanta, and killed three Asian American women there, then crossed the street to the Aromatherapy Spa, where another woman’s body was found. Atlanta police March 18 released the names of the victims in Atlanta: Soon Chung Park, 74; Hyun Jung Grant, 51; Suncha Kim, 69; and Yong Ae Yue, 63. Several of the victims were Korean nationals.

The FBI is investigating the murders. Atlanta Police Chief Rodney Bryant said March 17 it was too soon in the investigation to classify the shootings as a hate crime.

Social media posts show Long deeply involved with his church: police said he allegedly has an addiction to sex and was attempting to “eliminate temptation.” The suspect has confessed to the murders.

Indian American organizations offered condolences, support and solidarity for the victims and the spike in violence against the AAPI community.

Two members of the Ohio state Legislature have called for action with SB87, a bipartisan bill that would create a state commission and state office for Asian American and Pacific Islander affairs. The bill is sponsored by Ohio state Senators Tina Maharath, a Democrat, and Niraj Antani, a Republican.

“When you are seen as ‘the other,’ people get afraid of ‘the other,’ and so this commission is a way of raising the issues that the Asian American community has in Ohio, and certainly one of the goals should be to combat anti-Asian racism,” said Antani, speaking of the need for good data necessary for law enforcement to identify hate crimes.

Maharath spoke about the need for creating a “safe space” for Asian American victims of violence.

Hoboken, New Jersey Mayor Ravi Bhalla said: “Since the pandemic’s onset over a year ago, we have witnessed increased violence against Asian American Pacific Islanders. I’m heartbroken at the senseless acts of violence that sadly took the lives of six Asian American women in Georgia.”

“These horrific acts come at a time when Asian Americans and Pacific Islanders have been subject to racism, discrimination, and xenophobia that has absolutely no place in our society,” said Bhalla.

“This tragedy was also a sobering reminder for those of us who work at the intersections of gender-based violence and racial justice. Misogyny, racism, and xenophobia are intricately connected and Asian American immigrant women, particularly those who work in the service sector, are deeply vulnerable to hate crimes, sexual assault, and other forms of abuse and exploitation,” stated the organization, calling out the “brutal exploitation” of working-class Asian American women.

The Sikh American Legal Defense and Education Fund also expressed its sorrow for the victims and their families. Kiran Kaur Gill, SALDEF’s executive director, said: “We cannot ignore the fact that these murders occurred at a time when anti-Asian hate is at a high. Nor can we ignore the fact that Asian women make up over two-thirds of all victims of harassment. As a country, we must address the intertwined structural racism and misogyny that harms women of color.”

Gill noted that prosecutors and law enforcement have not identified Long’s motive.

The Hindu American Foundation stated: “Such incidents clearly illustrate how much farther the United States has to go in protecting all members of our society against bias attacks, the effects of inflammatory rhetoric about immigration, the necessity of accurate and culturally appropriate education so that future generations are no longer beset by such ignorance, hatred, and bigotry.” The organization called on policy makers to pass legislation that allows law enforcement to better prevent, respond to, and document hate crimes.

South Asian Americans Leading Together noted that police have not charged Long with a hate crime. “It is clear the shooter (who has cited “sexual deviance” as his motivation for murder) also had some bias in his targeting, whether explicit or implicit.”

“This, in turn, demands that we – as Asian and Pacific Islander Americans, as Americans of color, as Americans generally – question how embedded anti-Asian rhetoric is in American culture and how American culture benefits from patriarchal white supremacy and erasure. And more specifically, these intersections point to the clear history of dangerous sexualization of Asian women in the U.S., wrote SAALT.

“Hate crimes and discrimination against anyone, including Asian Americans and Pacific Islanders, are reprehensible acts that are contrary to the ideals of our nation and have no place in our society,” said Raj Parekh, Acting U.S. Attorney for the Eastern District of Virginia. “We will not stand still amid the horrific reports of racist and xenophobic acts of violence targeting Asian American and Pacific Islander individuals and communities nationwide.”