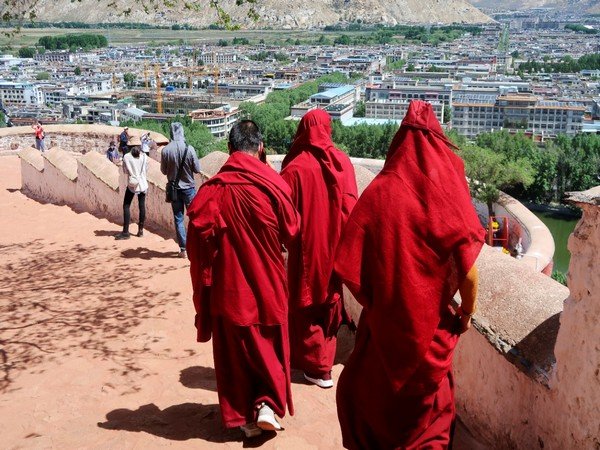 NEW DELHI, (ANI) – Bodhidharma, a revered Buddhist monk who lived during 5th or 6th century is credited for transmitting Chan Buddhism (the Chinese school of Mahayana Buddhism) in China. The word Chan originates from the Sanskrit word ‘Dhyana’ which means ‘mental absorption’ or meditation.

The teaching of this “great saint from Indian soil transformed the life and culture of people” in China, Japan, and many other Southeast Asian nations. The word was later conveyed to Vietnam as Thien, Korea as Seon and Zen Buddhism in Japan. Bodhidharma, also known as Putidamo in China and Daruma in Japan, was the second Indian Buddhist monk to visit Southern China.

Bodhidharma became the 28th patriarch of Mahayana Buddhism in India and the first patriarch of Chan Buddhism in China. He was the third son of the Pallava king Simhavarman II of the ancient Pallava dynasty of South India. The Pallava kingdom comprised the current states of Tamil Nadu, Karnataka, and Telangana. At that time, South India was the birthplace of great Buddhist panditas such as Acharya Nagarjuna and a cradle of Mahayana Buddhism.

After his father’s death, Bodhidharma made the decision to give up his princely life. As a child, he was a bright student and had learned the Dharma from Prajnatara, a Buddhist master from Magadha.

Bodhidharma traveled to China and met Emperor Wu-ti, a devout Buddhist of the Liang dynasty. The meeting between Bodhidharma and Wu-ti is recorded in the Blue Cliff Record, a collection of Buddhist koans compiled in 1125.

During the meeting, Emperor Wu-ti asked, “I have constructed many temples for Buddhists and used to serve for transcribing a number of Buddhism sutras. What karmic merit is promised?” In response, Bodhidharma said, “No merit.” After his confrontation with Emperor Wu-ti, Bodhidharma went north to live in a cave at the Shaolin monastery located on Songshan on Mount Sung near Lo-yang.

He sat in meditation for nine years and met his first disciple Huike who is believed to have established the Chinese martial arts of the Shaolin School.

In a conference paper titled ‘Contribution of Tamils to the Composite Culture of Asia’, it is written that Bodhidharma during his stay at Shaolin monastery “taught the monks the fighting art of India, which today is known as Kalaripayat and which in those days, was known as Vermanie.”

As a prince, Bodhidharma would have learned traditional arts which he further taught his Chinese students. He taught his students martial arts, breathing techniques related to the Pranayama and other techniques of Yoga. He taught martial arts to students to prepare them to defend themselves.

Bodhidharma rejected devotional rituals, doctrinal debates, and verbal formalizations and supported meditation, through which people can grasp the Buddha nature within. He was said to have introduced the Lankavatara Sutra to Chinese Buddhism.

Bodhidharma was highly revered by the monks and people of China even made visits to the cave to pay their respects to him. As per the report, eight major temples are dedicated to Daruma in Japan. Furthermore, his statue is enshrined in almost every Japanese Zen temple along with a statue of Buddha.