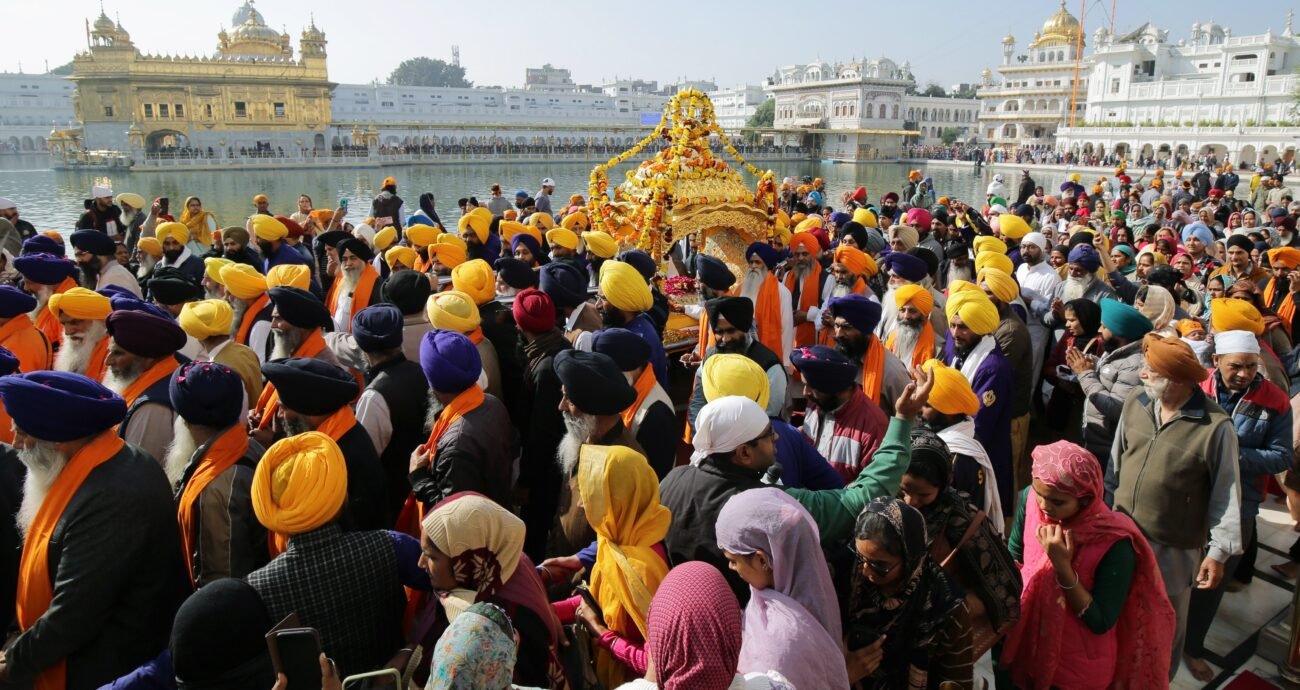 File photo of devotees carrying the holy book, Sri Guru Granth Sahib, in a golden palanquin during a religious procession on the eve of the 347th martyrdom anniversary of Guru Tegh Bahadur, at the Golden Temple, in Amritsar on Dec. 7. (ANI photo)

NEW DELHI — A man was beaten to death in the northern Indian city of Amritsar after he allegedly attempted to commit a sacrilegious act inside the historic Golden Temple, one of Sikhs’ most revered shrines.

The incident occurred during the daily evening prayer on Dec. 18, media reported, after the man jumped over a railing inside the inner sanctum and attempted to grab a sword that was kept near the Guru Granth Sahib, the Sikh holy book.

TV footage showed people inside the temple rushing to stop him.

Police told New Delhi Television that the man was killed after the incident and that they were checking CCTV footage to glean more information.

“The man, about 20 to 25 years of age, had a yellow cloth tied on his head and jumped the fence … the people inside held him and escorted him out to the corridor where there was a violent altercation and he died,” Parminder Singh Bandal, deputy commissioner of Amritsar police, told the channel.

The chief minister of Punjab state, where Amritsar is located, strongly condemned the incident, calling it the most “unfortunate and heinous act to attempt sacrilege,” his office tweeted late on Saturday.

IANS adds from New Delhi: The BJP has demanded a CBI investigation into the alleged sacrilege of the Sri Guru Granth Sahib in the sanctum sanctorum of the Golden Temple in Amritsar “so that such instances are not used to disturb the peace in Punjab.”

The BJP has appealed to Union Minister Amit Shah to persuade Punjab Chief Minister Charanjit Channi to hand over the case to the CBI.

Condemning the incident, BJP national spokesperson Sardar R.P. Singh said, “I strongly condemn the attempt to desecrate Sri Guru Granth Sahib in Darbar Sahib. I also demand the Charanjit Singh Channi government to immediately handover the case to the CBI so that the truth should be known, unlike Bargari, culprits of which are still roaming free.”

Singh pointed out that the CBI investigation will find the truth as to who the person was, what was his intention and the people behind him.

He appealed to the people to put pressure on the Channi government to hand over the case to the CBI.

“I appeal to Home Minister Amit Shah to persuade Punjab Chief Minister Charanjit Singh Channi to handover the matter of ‘beadbi’ (sacrilege) at Darbar Sahib immediately to the CBI for fair investigation so that this instance shouldn’t be used to disturb the peace in Punjab,” Singh said.