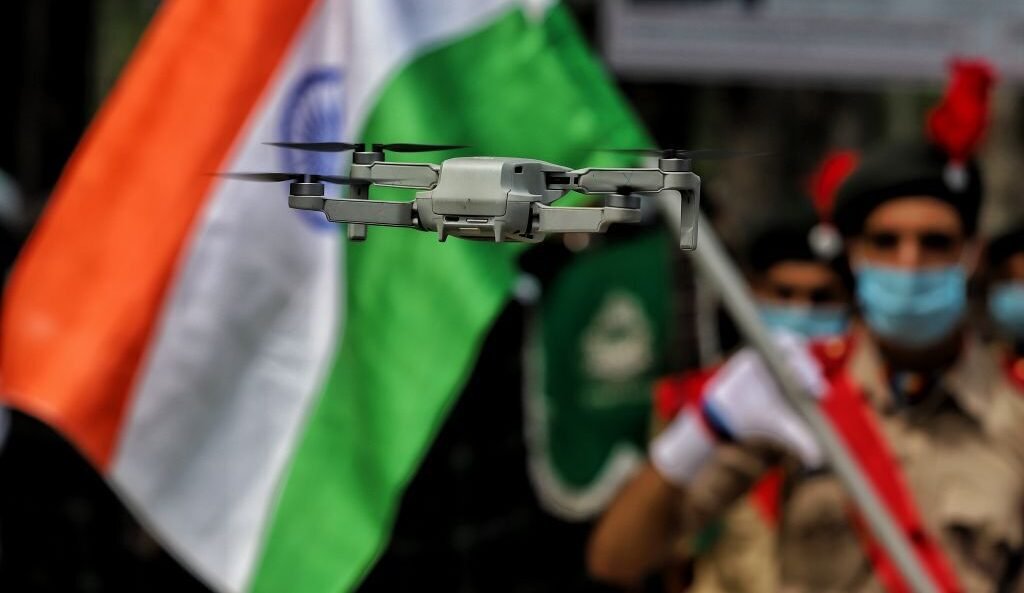 drone flies near the Indian national flag during an Indian Army event in Baramulla, Jammu and Kashmir, India on June 27. (Nasir Kachroo/NurPhoto via Getty Images)

SRINAGAR — India’s military said it thwarted a major threat when it intercepted two drones flying over an army base in Indian-controlled Kashmir early June 28, a day after suspected explosives-laden drones were used to attack an air base in the disputed region.

The military said troops around midnight spotted two drones separately flying over Kaluchak military base on the outskirts of Jammu city.

“Immediately, high alert was sounded and Quick Reaction Teams engaged them with firing,” the military said in a statement. “Both the drones flew away.”

On June 27, Indian officials said two drones carrying explosives were used to attack an air base in Jammu city and called it the first such incident of its kind in India.

Officials said two soldiers were lightly wounded in the two explosions, which also caused minor damage to a building on the base. No military equipment was damaged.

The air base in Jammu is also used as a civilian airport but there was no disruption to civilian flights.

The incident, if proven to have been carried out by anti-India rebels, would mark a major shift in strategy against New Delhi. Rebels have primarily used classic guerrilla tactics such as ambushes, hit-and-run attacks, remote-controlled explosions and car bombings.

No rebel group has so far commented on the two incidents.

Muslim-majority Kashmir is divided between India and Pakistan, and the Himalayan region is claimed by both in its entirety. Rebels have been fighting against Indian rule since 1989. Most Muslim Kashmiris support the rebel goal that the territory be united either under Pakistani rule or as an independent country.

Both countries claim to have shot down spy drones in the parts of Kashmir under their respective control.

Indian authorities in recent years have raised the possibility of drone attacks by rebels in the region, especially after repeatedly accusing Pakistan of using Chinese-made drones along the frontier to drop weapons packages for militant groups since last year.

Pakistan, including the country’s Prime Minister Imran Khan, has repeatedly warned that India could stage a “ false flag” attack to divert attention from its domestic difficulties.