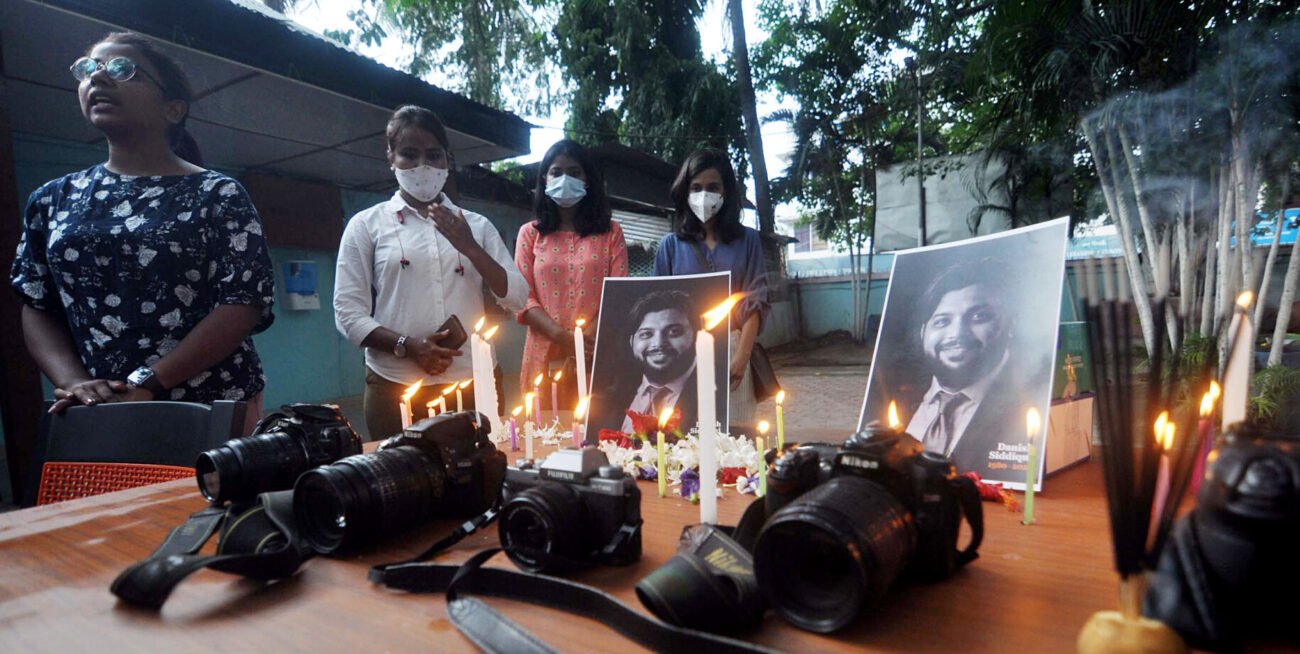 Media persons pay homage to Pulitzer prize-winning photojournalist Danish Siddiqui who was killed in Afghanistan, at the Press Club in Guwahati, Assam, on July 18. (ANI photo)

NEW DELHI/WASHINGTON – Pulitzer Prize-winning Indian photojournalist Danish Siddiqui was not simply killed in a crossfire, nor was he a collateral damage; rather, he was brutally murdered by the Taliban, Michael Rubin wrote in the Washington Examiner.

Local Afghan authorities say that Siddiqui had travelled with an Afghan National Army team to the Spin Boldak region to cover the clash between Afghan forces and the Taliban to control the lucrative border crossing with Pakistan.

When they got to within one-third of a mile of the customs post, a Taliban attack split the team, with the commander and a few men separated from Siddiqui, who remained with three other Afghan troops, the report said.

During this assault, a shrapnel hit Siddiqui, after which he and his team went to a local mosque where he received first aid. As the word spread, however, that a journalist was in the mosque, the Taliban attacked, as per the report.

The local investigation suggests that the Taliban attacked the mosque only because of Siddiqui’s presence there, it said.

Siddiqui was alive when the Taliban captured him. The Taliban verified Siddiqui’s identity and then executed him, as well as those with him. The commander and the remainder of his team died as they tried to rescue him, the report said.

“While a widely circulated public photograph shows Siddiqui’s face as recognizable, I reviewed other photographs and a video of Siddiqui’s body provided to me by a source in the Indian government that show the Taliban beat Siddiqui around the head and then riddled his body with bullets,” Rubin, a senior fellow at the American Enterprise Institute, wrote in the report.

“The Taliban’s decision to hunt down, execute Siddiqui, and then mutilate his corpse shows that they do not respect the rules of war or conventions that govern the behavior of the global community,” Rubin said.

“There are many parallels between the Khmer Rouge and the Taliban. Both infused radical ideology with racist animus. The Taliban are always brutal but likely took their cruelty to a new level because Siddiqui was an Indian. They also want to send a signal that Western journalists are not welcome in any Afghanistan they control and that they expect Taliban propaganda to be accepted as truth.

“In effect, Siddiqui’s murder appears to show that the Taliban have concluded that their pre-9/11 mistake was not that they were cruel and autocratic, but rather that they were not violent or totalitarian enough,” Rubin wrote in the report.

The real question for journalists is why the State Department continues to pretend that Siddiqui’s death was just a tragic accident.

Rubin said the Joe Biden administration’s decision to uphold the U.S.-Taliban agreement even though the Taliban have not, and to withdraw completely, is condemning Afghanistan to a bloodbath.

“It threatens to destabilize the broader region. But rather than confront reality, the Biden administration appears intent to whitewash Taliban crimes. To acknowledge the fact that the Taliban executed Siddiqui and that the photographer’s death was not a tragic accident, would contradict the White House spin,” Rubin said.