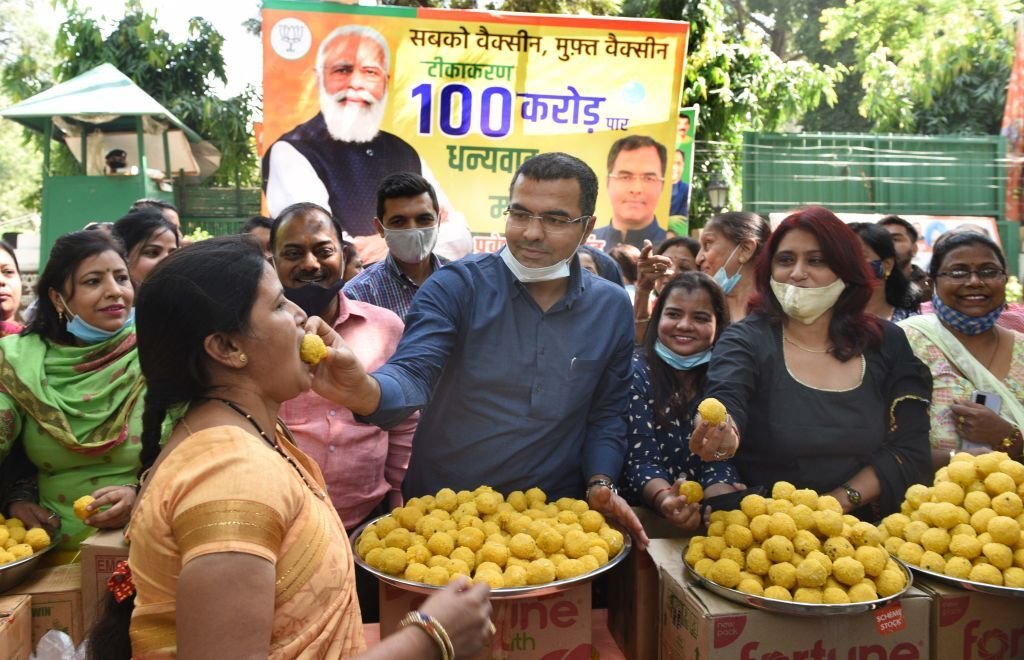 NEW DELHI (IANS) – A day after India achieved the 1 billion vaccine-mark, Prime Minister Narendra Modi Oct. 22 hailed the nation for the joint efforts in achieving the target and said the post-pandemic economy of the country is bouncing back at a fast pace.

Addressing the nation, the prime minister said, “Experts and many international agencies have given a positive forecast of the Indian economy, not only India is getting record investment, but it is also creating new job avenues for the youth.”

He said, “Startups are getting record investment and they are becoming unicorns.”

He also emphasized buying local products to boost domestic manufacturers. “Just like Swachh Bharat Abhiyan which is a Jan Andolan, buying things made in India, made by Indians, being VocalForLocal, also has to be made a mass movement.”

We should insist on buying every little thing which is ‘Made In India’, and this will be possible only with our combined efforts.

Modi also hailed the nation for achieving the 1 billion-mark.

“Yesterday, 21st Oct, India has achieved the difficult but extraordinary target of 1 Billion, 100 Crore COVID19 #Vaccine doses. This success is the success of India, success of every citizen.”

He said during the pandemic questions were raised about India’s capability and now the pharma sector has been strengthened more after this and has shown to the world what the country can give.

He said leaders from across the world congratulated India on crossing the milestone of 100 crore vaccinations, terming it a huge and extraordinary accomplishment.

But, the prime minister said that during the festivals caution should be observed and wearing masks should now be a part of life. He appealed to all citizens to get vaccinated and asked people to encourage each other.

AP adds from New Delhi: India celebrated giving its billionth COVID-19 vaccine dose Oct. 21, a hopeful milestone for the country where the delta variant fueled a crushing surge earlier this year and missteps initially held back its inoculation campaign.

About half of India’s nearly 1.4 billion people have received at least one dose while around 20% are fully immunized, according to Our World in Data. Many of those shots have come in just the past couple of months, after the rollout languished in the first half of the year amid vaccine shortages and problems with the system for rolling them out.

The success of the campaign has been credited with driving down coronavirus cases since the devastating months at the start of the year when India was recording hundreds of thousands of infections a day, hospitals buckled under the pressure, and crematoriums and graveyards became overwhelmed. But experts warn that India must speed up the delivery of second shots in order to ensure the outbreak doesn’t flare again.

The country widened the gap between shots from 12 to 16 weeks in order to administer more first doses at a time when supply was limited and infections were surging — a tactic countries like the United Kingdom have used in times of crisis. But it created a lag in getting people fully immunized.

India is using vaccines that require two doses. Ramping up the second dose is “an important priority,” V.K. Paul, the head of the country’s COVID-19 taskforce, said last week.

“We would like to see this number go up. Complete coverage is absolutely critical,” Paul said.

For now, the country appears to have enough vaccines to do that — but its supplies will be watched closely since it is a major supplier of the shots globally. When it halted exports in April as cases surged at home, it had a devastating impact on poorer countries that particularly rely on doses from India. Exports resumed earlier this month.

The government is now optimistic that the country’s rising vaccine supply will be enough to cover its international and domestic commitments. Both of the two main suppliers have ramped up production, with the Serum Institute of India now producing around 220 million doses a month and Bharat Biotech about 30 million, Paul said.

Still, experts say the vaccine situation will need constant review. “There can be no written-in-stone rule — if infections rise drastically, they can again stop exports until there’s enough doses,” said K. Srinath Reddy, president of the Public Health Foundation of India.

On Oct. 21, India confirmed more than 18,400 new cases and 160 deaths — dramatically below the worst days in May when daily fatalities exceeded 4,000. Overall, the country has recorded around 34 million infections and over 450,000 deaths, according to the Health Ministry, though those figures, as elsewhere, are likely undercounts.

Even states where infections were swelling a few weeks ago, such as Kerala along the tropical Malabar coast, have seen a sustained decline.

“There is a sense of comfort that India has suffered the worst of the delta variant, but this must be accompanied with a feeling of caution,” said Reddy. “Even if cases go up, we are unlikely to see the scale of the surge earlier — if that does happen, it would be fairly unexpected.”

India earlier said it aimed to vaccinate all eligible adults by the end of the year, but experts say the current pace of immunizations will need to increase to meet this goal, even though it has already ramped up significantly. Though the campaign began in January, by mid-June, only about 3.5% of the population had been fully vaccinated.

India celebrated the achievement of 1 billion shots with fanfare Thursday. Billboards announcing the feat with a photo of Prime Minister Narendra Modi were posted across New Delhi. Outside a local politician’s house in the capital city, residents gathered as sweets were distributed. A song and film to commemorate the moment have been released, and the Indian flag was unfurled at the historic Red Fort in New Delhi.

In recent months, life in India has swung back to normal. Markets buzz with activity, foreign tourists are allowed again after a 19-month hiatus and the country is gearing up to celebrate Diwali, the Hindu festival of lights.

But there are fears this could be a lull before a storm. Even though India may have borne the brunt of the delta variant already, things could escalate quickly if a new variant emerges — either from within the country or outside.

“If the virus becomes different or mutates, it changes the dynamics. This could change everything,” Paul said.

ANI adds from Agra: The Agra Fort in Uttar Pradesh was lit up in the tricolor on Oct. 21. Under the Archaeological Survey of India’s initiative, 100 monuments across India were being illuminated in colors of the national flag following the feat. The illumination is taking place as a mark of respect and gratitude to corona warriors — vaccinators, sanitation staff, paramedical, auxiliary workers, police personnel who have contributed relentlessly in the fight against the Covid pandemic.

The 100 monuments being lit up in the tricolor include the UNESCO World Heritage Sites – the Red Fort, Humayun’s Tomb and Qutab Minar in Delhi, Fatehpur Sikri in Uttar Pradesh, Konark Temple in Odisha, Mamallapuram Rath temples in Tamil Nadu, St. Francis of Assisi Church in Goa, Khajuraho, the forts of Chittor and Kumbhalgarh in Rajasthan, the excavated ruins of the ancient Nalanda University in Bihar and Dholavira in Gujarat.

In Washington, India’s envoy to the U.S. Taranjit Singh Sandhu said that there is “very strong and deep appreciation” in the United States as India achieved the one billion COVID-19 vaccinations milestone.

Speaking at Public Affairs Forum of India’s 8th National Forum 2021 on Oct. 21, Sandhu said: “It is a very proud moment for us and I can tell you that there is very strong and deep appreciation in the U.S. that we have crossed the one billion landmark and all through the vaccines manufactured in India.” Several world leaders congratulated India on this achievement.

(With IANS, ANI and AP reports)