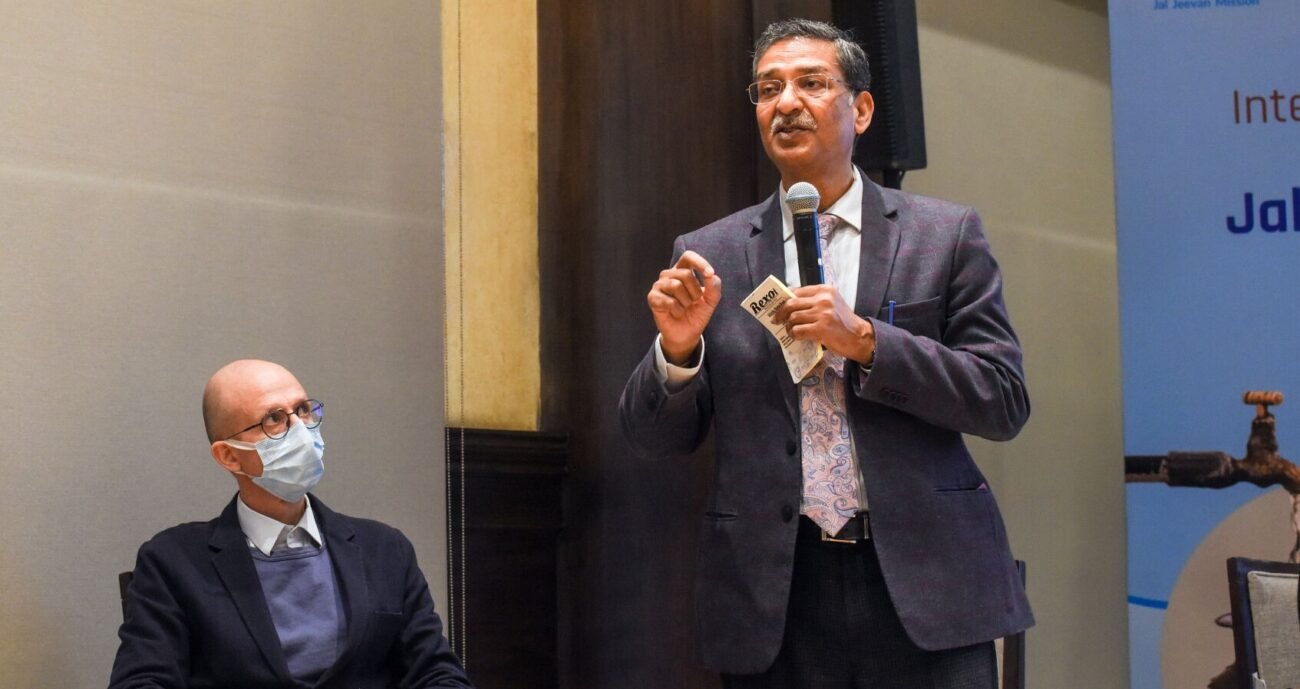 Secretary and director of the national Jal Jeevan Mission, Bharat Lal, speaks to the media as Nicolas Osbert, chief of WASH, UNICEF, looks on during an Interactive Session on the Jal Jeevan Mission, at Gujarat Bhavan, in New Delhi on Dec. 20. (ANI photo)

Mujib Mashal, The New York Times bureau chief for South Asia, and Hari Kumar, a reporter in the New Delhi bureau, writing in The New York Times said that the mission is halfway through an ambitious drive to provide clean tap water by 2024 to all the roughly 192 million households across its 600,000 villages. About 18,000 government engineers are overseeing the $50 billion undertaking, which includes hundreds of thousands of contractors and laborers who are laying more than 2.5 million miles of pipe.

The ambitious project to meet a dire need shows Modi’s strengths and helps explain his popularity despite a weakened economy, said Mashal and Kumar.

The mission to deliver water to every household combines two of Modi’s political strengths: his grasp of the day-to-day problems of hundreds of millions of India’s poor and his penchant for ambitious solutions.

About one-sixth of India’s households had a clean water tap when the program, called Jal Jeevan Mission, began in 2019. Now, almost half have one, reported The New York Times.

“You rarely have this drive from the government, the head of state, and it is well funded. Behind the concept, there is budget,” said Nicolas Osbert, who leads the UNICEF water and sanitation unit in India. “All social sectors were impacted by COVID. Not this one. This one was preserved.”

The country’s water problem speaks to the mismatch between its global economic ambitions and the dire conditions of much of its 1.4 billion population, two-thirds of whom still live in rural areas.

Nearly 40 million Indians are affected by waterborne diseases every year, leading to about $600 million annually in medical costs and labor loss. About 100,000 children under 5 years old die of diarrhea every year. The growth of millions more is stunted, said Mashal and Kumar.

“The paucity of water should not become a limiting factor in our quest for socio-economic development, the quest for high economic growth,” said Bharat Lal, the top official Modi has named to lead the mission.

From his office in New Delhi, Lal checks the progress on a detailed computerized dashboard. About 100,000 connections are added every day, according to official figures.

Moreover, in areas where groundwater is overexploited, the program pipes and pumps treated water over tens of miles from sources like dams. Villagers are trained to test the quality of water and upload the data to the dashboard.

They are also taught how to recycle and reuse waste water. Pilot projects are underway to install automated pressure and quality sensors, reported The New York Times.