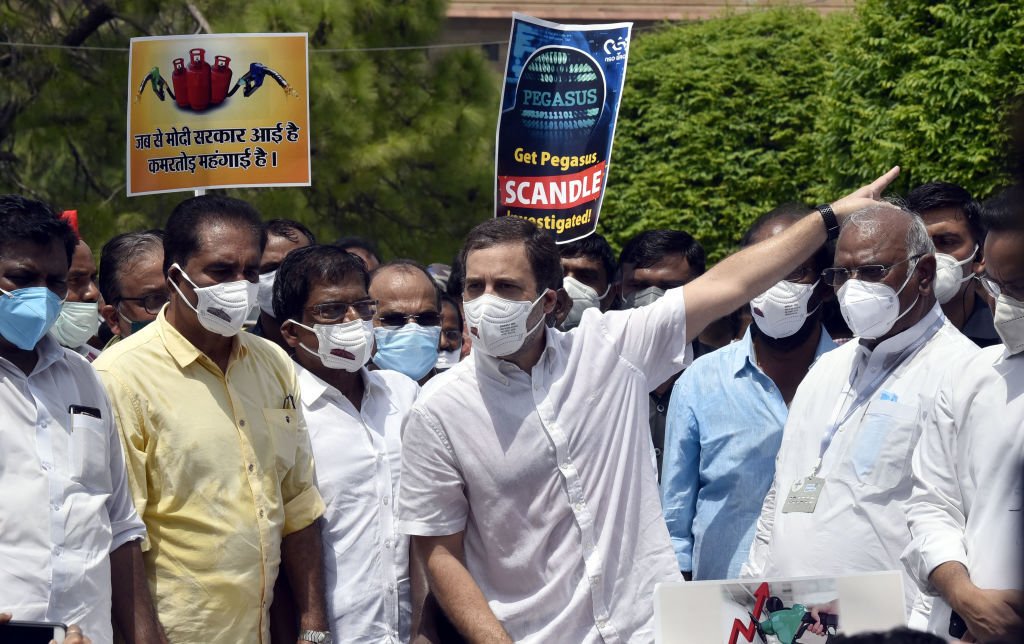 File photo of Congress leader Rahul Gandhi addressing the media during a protest march by Opposition leaders from Parliament to Vijay Chowk against issues like Pegasus, on Aug. 12, 2021, in New Delhi, India. (Sanjeev Verma/Hindustan Times via Getty Images)

The Supreme Court order came in response to petitions filed by a group of Indian journalists, rights activists and opposition politicians following an investigation by a global media consortium in July. The committee, headed by a retired judge, is expected to give its findings by year-end.

India’s opposition has been demanding an investigation into how the Israeli spyware, known as Pegasus, was used in India.

Modi’s government has “unequivocally” denied all allegations regarding illegal surveillance. India’s information technology minister Ashwani Vaishnaw in Parliament dismissed the allegations in July, calling them “highly sensational,” “over the top” and “an attempt to malign the Indian democracy.”

But the government in an affidavit did not tell the court whether it used the Israeli equipment for spying, citing security reasons.

On Wednesday, the court said the state cannot get a free pass every time by raising security concerns.

“Violation of the right to privacy, freedom of speech, as alleged in pleas, needs to be examined,” the Press Trust of India cited Chief Justice N.V. Ramanna as saying.

Based on leaked targeting data, the findings by a global media consortium provided evidence that the spyware from the Israel-based NSO Group, the world’s most infamous hacker-for-hire company, was allegedly used to infiltrate devices belonging to a range of targets, including journalists, activists and political opponents in 50 countries.

The company said in July it only sells to “vetted government agencies” for use against terrorists and major criminals and that it has no visibility into its customers’ data.

Critics call those claims dishonest and have provided evidence that NSO directly manages the high-tech spying. They say the repeated abuse of Pegasus spyware highlights the nearly complete lack of regulation of the private global surveillance industry.

Pegasus infiltrates phones to vacuum up personal and location data and surreptitiously controls the smartphone’s microphones and cameras. In the case of journalists, that allows hackers to spy on reporters’ communications with sources.

Rights groups say the findings bolster accusations that not only autocratic regimes but also democratic governments, including India, have used the spyware for political ends.