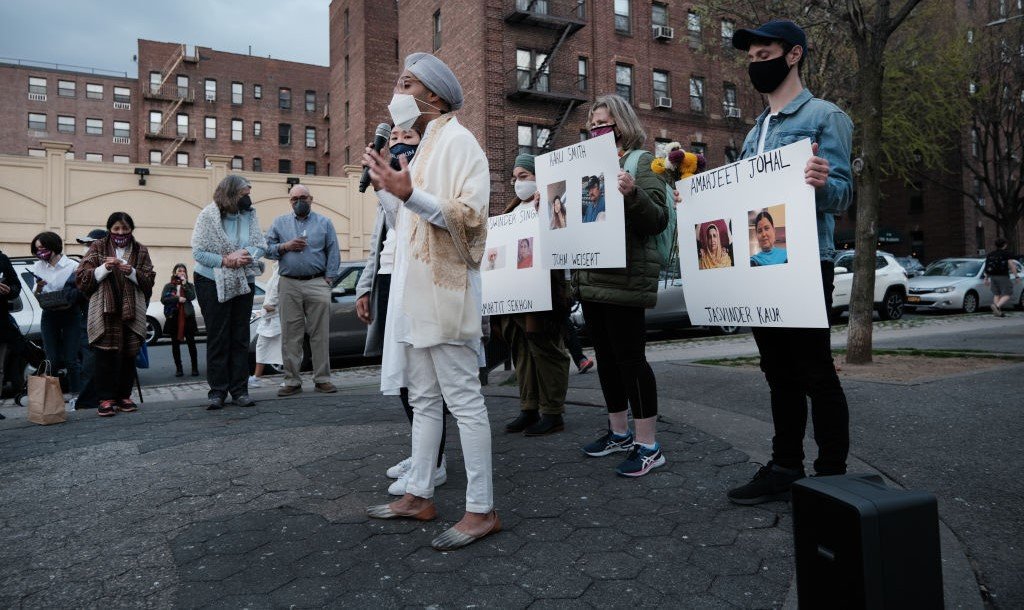 Local politicians and community members attend a vigil on April 19, 2021 in New York City. The vigil was held for the members of the Sikh American community killed in the mass shooting at a FedEx facility in Indianapolis last week. “If it is determined that there was a failure in this law that could have prevented this tragedy from happening, the law should be fixed,” Satjeet Kaur, executive director of the Sikh Coalition, said. (Spencer Platt/Getty Images)

INDIANAPOLIS — An Indiana prosecutor is facing mounting criticism for declining to pursue court hearings that could have prevented a man from accessing the guns used to shoot and kill eight people at a FedEx facility in Indianapolis.

The leader of the Indianapolis police union said Marion County Prosecutor Ryan Mears “failed to do his part” when he chose not to bring Brandon Scott Hole before a judge for a hearing under Indiana’s “red flag” law, even after his mother called police last year to say her son might pursue “suicide by cop.”

The law allows police to confiscate guns from a person deemed dangerous to themselves or others. Prosecutors can then decide whether to ask a court to ban that person from buying any other firearms.

The law came under scrutiny following the assault after Mears criticized it for having too many “loopholes.” Despite calls from Democratic lawmakers to review and strengthen the red flag provisions, those actions were put on hold. The 2021 legislative session ended April 22.

Police seized a pump-action shotgun from Hole, then 18, in March 2020 after they received the call from his mother. Mears said April 19 that prosecutors did not seek a “red flag” hearing to try to prevent Hole from possessing a gun because they did not have enough time under the law to definitively demonstrate his propensity for suicidal thoughts.

Mears specifically pointed to a 2019 change in the law that requires courts to make a “good-faith effort” to hold a hearing within 14 days. An additional amendment requires authorities to file an affidavit with the court within 48 hours.

“This individual was taken and treated by medical professionals and he was cut loose,” and was not even prescribed any medication, Mears said. “The risk is, if we move forward with that (red flag) process and lose, we have to give that firearm back to that person. That’s not something we were willing to do.”

Indianapolis police previously said that they never returned that shotgun to Hole. Authorities have said he used two “assault-style” rifles to gun down eight people, four of them from the city’s Sikh American community, at the FedEx facility on April 15 before he killed himself.

Members and leaders of the Sikh community have demanded that law enforcement conduct a “thorough” and “transparent” investigation, including a probe into the possibility of bias as Hole’s motivation, said Satjeet Kaur, executive director of the Sikh Coalition. Those calls have so far avoided direct criticism of Mears, however.

“If it is determined that there was a failure in this law that could have prevented this tragedy from happening, the law should be fixed,” Kaur said. “If the law was incorrectly implemented as written, the parties responsible must be held accountable.”

Republican state Sen. Erin Houchin, who sponsored the 2019 changes to Indiana’s red flag law, said it “could have worked just as it should” in the Hole case.

“I think that had the prosecutor followed the red flag procedure in this case, then this 19-year-old might have not been able to purchase a second firearm after the family did voluntarily turn over that weapon,” Houchin said.

Indiana law does not mandate prosecutors to pursue court hearings in red flag law cases. Houchin said she would consider amending language to “firm up” that process, but only after more facts surrounding the shooting come to light.

Snyder said the Indianapolis Metropolitan Police Department has made at least 45 red flag referrals to the prosecutor’s office so far this year. Mears said April 19 that his office had filed eight red flag petitions since January. All are still awaiting rulings.

“The prosecutor appears to have raised the suggestion that the system failed, but I would point out that in this instance, the system didn’t fail,” Synder said. “A loophole did not thwart this opportunity, instead the process was sidestepped.”