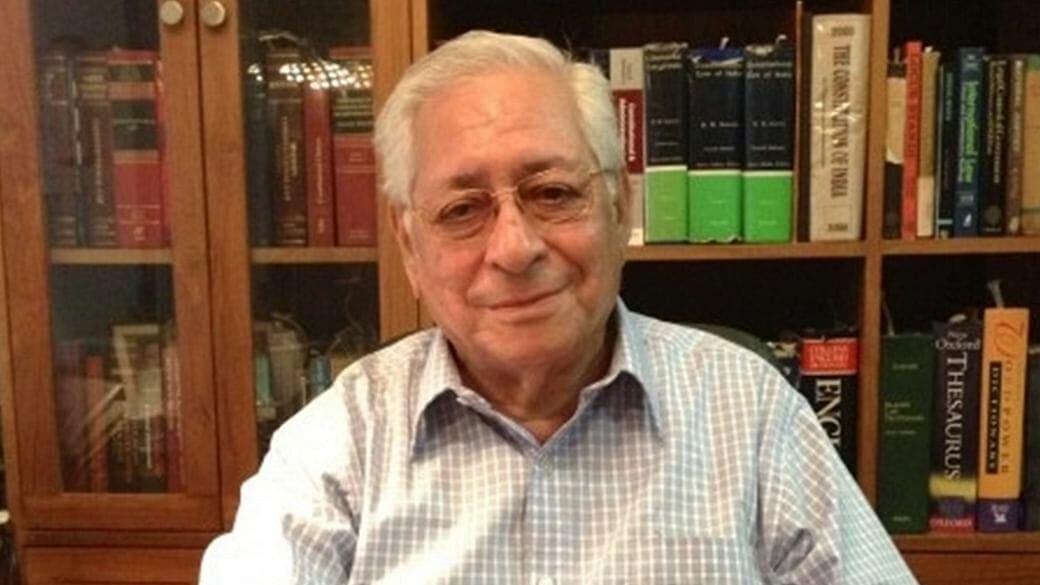 “The gentle giant Soli Sorabjee passed away this morning. Always ready to lend a helping hand Soli Sir leaves behind countless admirers & many memories. My condolences to the family in this hour of grief,” tweeted Union Minister Smriti Irani while condoling Sorabjee’s demise.

Defense Minister Rajnath Singh also condoled the demise of Sorabjee, calling him an exceptional legal mind and a great scholar of the Indian constitution.

“Deeply pained by the demise of India’s former Attorney General and veteran jurist, Shri Soli Sorabjee,” tweeted Singh. “He was an exceptional legal mind and a great scholar of our constitution. His services to the nation will always be remembered. My heartfelt condolences to his bereaved family,” he added.

Born on March 9, 1930, Sorabjee and was a champion of freedom of speech and expression.

Sorabjee had been honored with the Padma Vibhushan in 2003 for his contribution towards the defense of the freedom of expression and the protection of human rights. Sorabjee has held several offices in organizations of national and international repute.

Politicians on both sides of the aisle mourned the passing of the eminent jurist. “Saddened by news that former Attorney General Soli Sorabjee has passed away after a recent bout of Covid,” tweeted Shashi Tharoor. “A man of uncommon ability & integrity, he stood for principled public values. (And we shared a birthday.) A giant has departed. RIP Soli.”

Union Home Minister Amit Shah tweeted: “Anguished to learn about the passing away of Shri Soli Sorabjee, a noted jurist and former Attorney General of India.”

“Sorabjee was a doyen of the legal fraternity, who will always be remembered for his contribution in the field of constitutional law. My condolences to his family,” tweeted Shah.

Writer-politician Swapan Dasgupta wrote: “Saddened to hear of the death of Soli Sorabjee. A great lawyer, a man of erudition and above all a perfect gentleman, Soli was a pillar of the anti-Congress movement. I remember so many interesting interactions with him. We shall all miss him.”

Sorabjee was a renowned human rights lawyer. He was appointed by the United Nations as a Special Rapporteur for Nigeria, in 1997, to report on the human rights situation in that country. Following this, he become a member and later Chairman of the UN-Sub Commission on the Promotion and Protection of Human Rights, from 1998 to 2004. He was a member of the United Nations Subcommission on Prevention of Discrimination and Protection of Minorities, and also served as member of the Permanent Court of Arbitration at The Hague from 2000 to 2006, according to a Brandeis University biography.

He worked on the Citizen’s Justice Committee which represented pro bono the 1984 anti-Sikh riots victims. And in March 2006 he was appointed an Honorary Member of the Order of Australia, “for service to Australia-India bilateral legal relations.”

Sources close to the family said Sorabjee had received both doses of the COVID-19 vaccine.