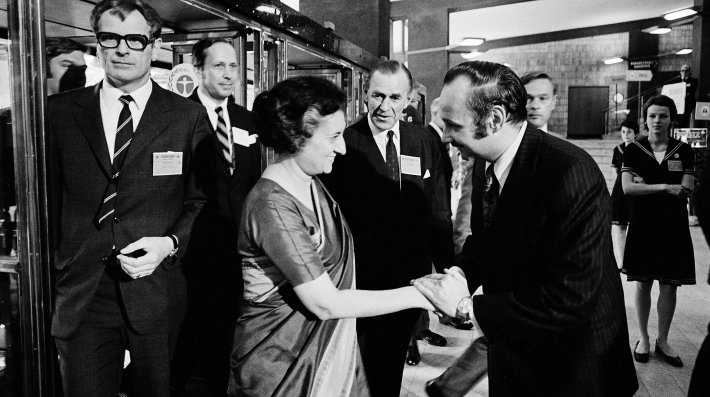 “Friends, today we are standing on the shoulders of the Stockholm giants,” said UN Environment Program (UNEP) Executive Director Inger Andersen in her opening ceremony remark.

“Maurice Strong, who led the conference and became UNEP‘s first Executive Director… Prime Minister Indira Gandhi, whose speech linked environmental conservation and poverty reduction — one of the key principles of the Sustainable Development Goals, or SDGs.

“Prime Minister Olof Palme, whose call for concerted international action resonates even today. President Jomo Kenyatta, who gave a UNEP a home at the first United Nations headquarters in the global south — where we stand today, with his son, President Uhuru Kenyatta,” Andersen said.

The UNEP chief added, “Their memories live on in us. Their deeds live on with us. Because these pioneers, and others like them — including former UNEP Executive Directors, such as Achim Steiner, with us here today — made everything we do possible. So let us remember how they put the environment on the global socioeconomic map.”

In the presence of Kenyan President Uhuru Kenyatta and Leila Benali, President of the Sixth UN Environment Assembly, among others, the UNEP chief said, “Back then, carving out relevance for a little-known subject was not easy.

“People sent telegraphs, not emails. They took flights to advocate change, instead of placing video calls. There were no universities offering degrees in environmental studies.”

In her speech, she explained how these pioneers succeeded.

“They laid the foundations for the awareness we see today. They wove the tapestry of multilateral environmental agreements that hold us to account — on everything from protecting species to slowing global warming. The obvious example is the Montreal Protocol on Substances that Deplete the Ozone Layer. Yes, you’ve heard this one before, but don’t stop me. Instead, pause to reflect on this achievement.

“The world united to repair a hole in the sky. Not a hole in a sock, a hole in the road, a hole in a budget. A gaping hole in the blue vastness above us. Yes, human technology carved out this hole. But we didn’t double down on our mistake. We doubled back. We fixed the error, saving millions of lives and protecting nature. We showed that environmental multilateralism does deliver,” she said.

“This is a lesson that should still inspire us,” Andersen stressed.

Tracing 50 years of environmental milestones, she highlighted the launch of scientific bodies, such as the Intergovernmental Panel on Climate Change, or IPCC.

“The phase-out of lead in petrol. And, just yesterday, the resolution starting negotiations on a global plastic pollution deal,” Andersen said.

“But let’s zoom out and see one overarching success: Today, UNEP is at the heart of protecting the asset upon which we all rely, the environment. The world has realised that we cannot pollute our way to development and clean up after.

“We have a human right to a healthy environment. Youth are demanding change. Governments, cities and regions are acting. Businesses are acting. Investors are acting,” she said.

None of this was in place 50 years ago, she added.

“However, our journey will only conclude when we ensure that humanity can thrive without skewing the delicate balance of life on this glorious planet,” Andersen said.

“A thread that UNEP and the environmental community have thickened, strand by additional strand, into a guide rope strong enough for us all to grasp. We must now hold fast to this rope, and follow it into blue skies, azure seas and verdant nature — thrumming with life in all its forms. Into peace, prosperity and equity. Into a world where humanity lives as part of nature, not above it.

“We owe this to our past, to our present and to our future,” Andersen added.

Just hours after 175 nations endorsed a historic resolution to end plastic pollution by creating an intergovernmental committee to negotiate and finalize a legally binding agreement by 2024, the special session of the UN Environment Assembly began here.

To mark UNEP’s 50th anniversary, a year-long series of activities and outreach events are taking place under the UNEP@50 banner. These recognize the significant progress made on the global environmental matters and address the planetary challenges to come.