Is India Muscling Its Strategic Autonomy by Engaging East and West? 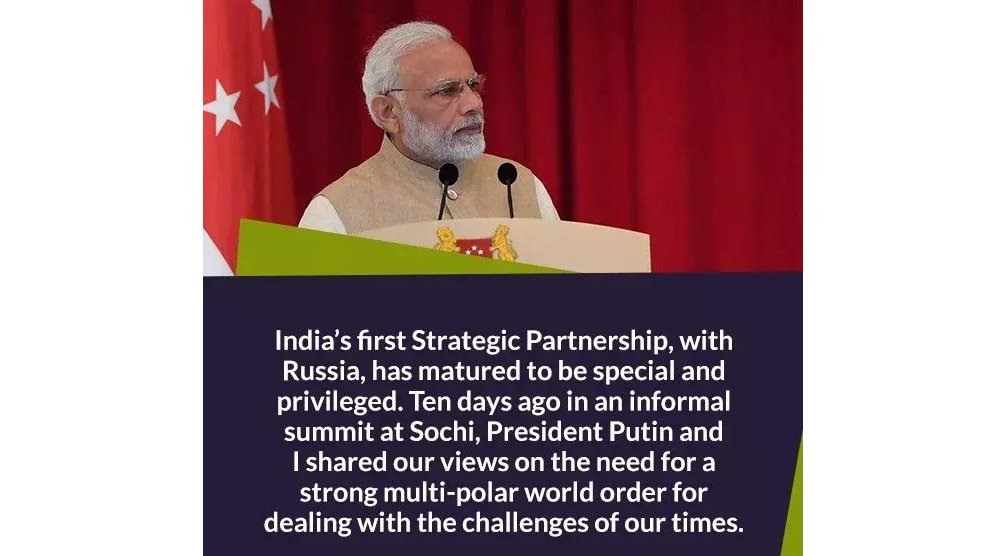 Is India Muscling Its Strategic Autonomy by Engaging East and West?

As India rises and its global footprint increases, its foreign policy must keep pace. There is international acceptance that India is set to become the third largest economy possibly by 2030. With this, its political weight will also increase. It already has the third largest military in the world.

With its determination to build an indigenous defense manufacturing base, it will gain more independence in policy making once that happens significantly, besides boosting our capacity to be a net security provider in the Indo-Pacific region. Most importantly, all this will enable India to exercise a needed strategic autonomy to pursue its crucial national interests.

The texture of India’s foreign policy has changed in response to changes in the international scene. To many external watchers in the Global South in particular, India has shown a remarkable ability to avoid having to make a choice between contending powers and to be able to engage with them successfully bilaterally or on plurilateral platforms to its national advantage.

India is now part of the Quad with the US, Japan, and Australia in the Indo-Pacific region, and part of the Shanghai Cooperation Organization (SCO) as well as BRICS, not to mention its participation in the Russia-India-China dialogue format even when India is locked in a serious military stand-off with China on its Ladakh border.

Towards the West, India is now member of a new Quad, the I2U2, which is a product of India’s increasingly close ties with Israel and vastly improved ties with Gulf monarchies like UAE and Saudi Arabia. India has signed an FTA with UAE. Counter-terrorism cooperation from both UAE and Saudi Arabia constitutes a major advance. Defense cooperation is also on the agenda with the Gulf countries, given India’s proximity to the region and its naval capabilities. The breakthrough in relations between Israel and UAE and Bahrain as well, no doubt quietly endorsed by Saudi Arabia, explains the emergence of the I2U2 grouping.

Israel has apparently pushed for a four-way cooperation with US participation in I2U2 to consolidate further the Abraham Accords, to which India has added its political weight. The first concrete results of the I2U2 virtual summit on July 14 are India-related in the field of food security and green energy transition.

India, UAE and Israel could have proceeded with productive trilateral cooperation without US participation, but India had little reason to discourage the Israeli initiative given India’s maritime cooperation with the US in this region with direct contacts between India and the US Naval Forces Central Command headquarters in Bahrain, as well as the potential of quadrilateral cooperation in science and technology, including space where UAE cooperates with US and has expressed interest in India’s low-cost satellite launch vehicles. India and US also have interest in connectivity projects in the region in the context of China’s BRI project.

At the same time India has kept its line of communication open with Iran, which is seen by both Israel and the Gulf states as an adversary.

The Iranian Foreign Minister was in India only recently. Apart from the Chabahar project, the North South Corridor linking India to Russia through Iran is gaining salience and momentum because of western sanctions on Russia which have opened the doors for increased trade exchanges between India and Russia.

India’s ties with the US are the most wide-ranging that we have, which is normal given that the US remains the world’s foremost economic, financial, military, and technological power. But political and economic power is getting dispersed with the rise of other centers of power, in particular China. That the US now treats both Russia and China as adversaries and the latter two have been pushed into closer strategic ties, the inevitable result will be an erosion of US global dominance despite the reforging of a stronger transatlantic alliance following Russia’s military intervention in Ukraine.

Unlike in the case of sanctions on Iran which India complied with despite the costs they imposed on us, in the case of sanctions against Russia, India has not cut off its economic exchanges with Russia even in the oil sector. In fact, the global South is mostly not adhering to US/EU sanctions or buying into the western narrative on the cause of the conflict in Ukraine. That the US writ is not prevailing in the case of the Ukraine conflict globally shows that it needs partners outside the transatlantic alliance to exercise power, despite its dominance of the global financial system through the US dollar.

This explains why the US, despite early efforts to pressure India to condemn Russia for invading Ukraine, not buy discounted oil from Russia and reduce its military ties with that country, projecting it as an unreliable arms supplier in the years ahead following its losses in Ukraine and the need to replenish its own inventories etc. is taking of late a longer term view of ties with India, no doubt in the context of the challenge from China in the Indo-Pacific region to US power and a recognition that India, with its own threats from China, is vital to any serious strategy of countering China.

It is interesting that even as the US has been hectoring India to diversify its defense ties away from Russia and maintaining ambiguity on CAATSA sanctions, the US House of Representatives has recently passed a legislative amendment by a large majority exempting India from CAATSA sanctions. What is now needed a Senate vote and the President’s signature. One hopes this process will not be delayed and the interim period not used to pressure India to award a large defense contract– F18s for our aircraft carrier-to demonstrate concretely its commitment to an enlarged military relationship with the US.

Despite declaring India as a Major Defense Partner, the DTTI, the Strategic Trade Authorization 1 (STA-1) status and signing the Industrial Security Annexe, the US remains ambivalent about participating in our Atmanirbhar project in defense manufacturing, sharing advanced technology with India unless there is clarity about joint missions that this would facilitate, and continuing discomfort over our defense ties with Russia, with fears of technology leakages to the latter through us.

On trade, India, having walked out of RCEP, and in view of the fracturing of the global economy, the weakening of WTO’s role in maintaining a rules-based trade order, has decided to enter FTAs, with Australia and UAE signed already, and with EU, UK, and Canada under negotiation.

India is open to discussing some trade pact with the US, but the latter is unprepared to sign any as a matter of policy for the present. In Asia, the US has proposed an Indo-Pacific Economic Framework under four pillars of Connected, Resilient, Clean and Fair Economy, as an alternative to China’s approach, but without offering any market access to the US. India has agreed to join only two areas- Resilient and Clean Economy, as it is wary of US mixing extraneous non-trade issues in trade matters.

With China, the relative predictability of ties following a series of peace and tranquility agreements on the border and attempts to negotiate a border agreement on a political basis and, concomitantly, separating trade ties from border differences, ran aground in 2020 with China violating all previous agreements and provoking a serious skirmish to unilaterally change the LAC on the ground. Both countries now have 50,000 forces massed against each other. This has pushed India into a stronger commitment to the Quad. Yet, India continues to engage China, even though 16 rounds of negotiations have not reversed China’s border encroachments. Trade has reached record levels.

This pragmatism flows from a view that we can handle China’s border moves adequately militarily and, more importantly, not to lose our maneuverability internationally by closing our own room to autonomously handling our problems as far as possible, and not make ourselves overdependent on the geopolitical choices of other major powers who can always take decisions in national interest contrary to our own, as in the case of Afghanistan, for instance.

Multipolarity, reform of international institutions, rebalancing international relations, resisting hegemony- whether of West or East- remain critical foreign policy goals for India. As we rise, our capacity to pursue them will expand too. (IANS)