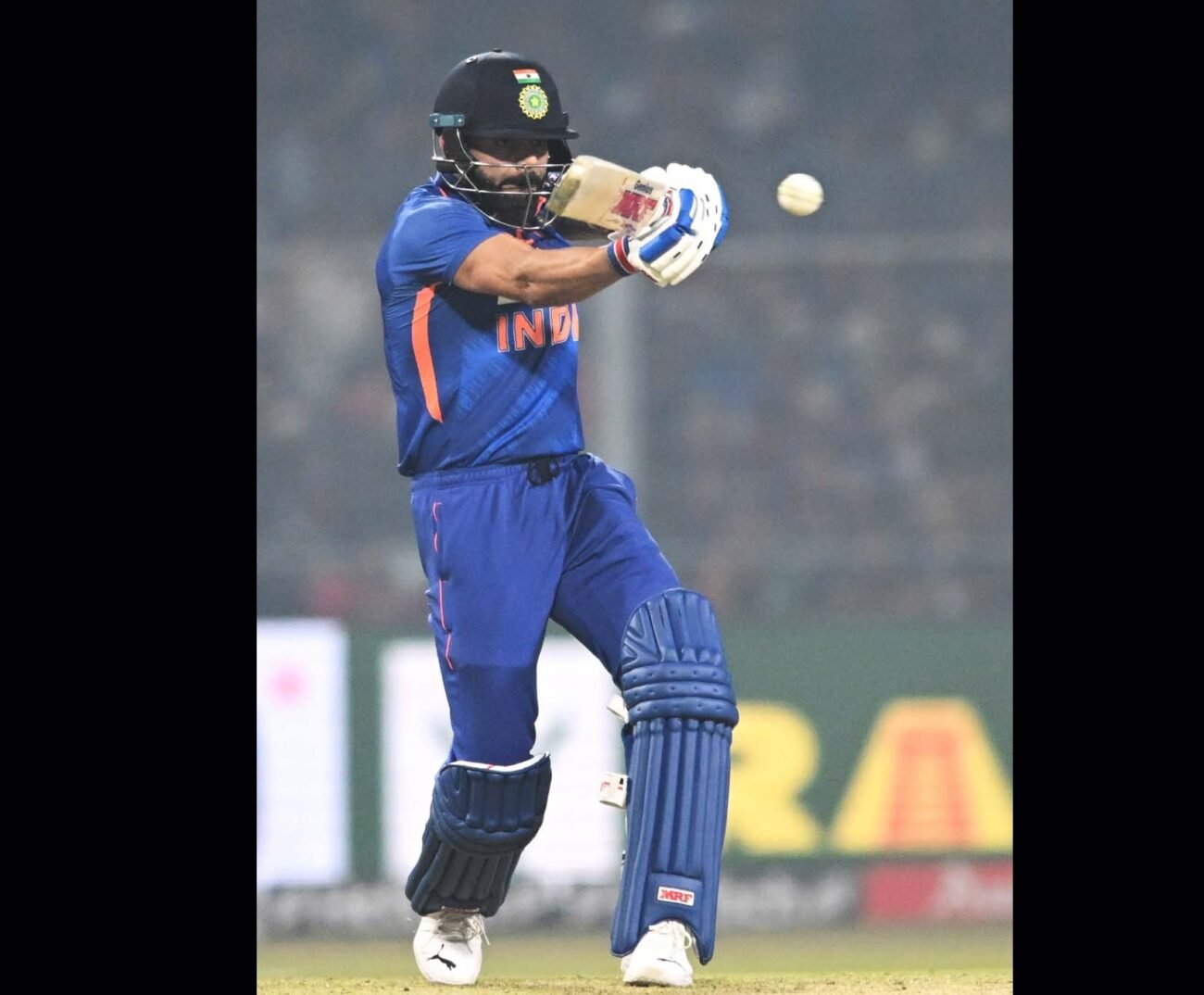 THIRUVANANTHAPURAM, (IANS) – Virat Kohli dished out another batting masterclass with his 46th ODI century while Shubman Gill notched up his second hundred and Mohammed Siraj picked four wickets to give India a 3-0 series victory with a 317-run thrashing of Sri Lanka at Greenfield International Stadium on January 15.

On a slow yet placid pitch, Kohli was off the blocks quickly and anchored the innings for a large part to remain unbeaten on 166 off 110 balls, his tenth hundred against Sri Lanka. In his third century in the last four ODI innings, Kohli hit 13 fours and eight sixes, feasting on a hapless bowling attack.

In the last ten overs, he fetched 84 out of the 116 runs India scored to literally bat Sri Lanka out of the match. He also shared a 131-run partnership with Gill, who was stylish in his 116 off 97 balls, hitting 14 fours and two sixes, and propel India to a mammoth 390/5.

In reply, Sri Lanka crumbled like a pack of cards to be all out for just 73 in 22 overs, their fourth-lowest total in the format and gave India their biggest margin of victory in ODI history.

Mohammed Siraj got the ball to move around to run through the top order and pick his career-best figures of 4-32 in ten overs, while Mohammed Shami and Kuldeep Yadav had figures of 2-20 and 2-16 respectively in India’s dominating victory.

Electing to bat first, India had a sedate start, making only 19 runs in the first five overs. Rohit set the tone for the aggression, stylishly flicking over deep mid-wicket for six off Lahiru Kumara. Gill joined the fun in the same over by getting four consecutive boundaries.

Rohit was timing his shots beautifully like a straight drive slammed down the ground off Rajitha and oozed elegance while pulling and lofting for sixes before flicking past mid-on for four, as India amassed 75 runs in the first ten overs.

The 95-run opening stand was broken by Chamika Karunaratne when Rohit pulled straight to deep square leg in the 16th over. Kohli arrived and looked in the mood of playing another exquisite knock by hitting three sublime boundaries, both off the front foot and back foot.

After Gill reached his fifty in 52 balls, he began to grow in confidence — slog-sweeping Jeffrey Vandersay over deep mid-wicket for six and then leant into a front foot drive past mid-off for four more. He cashed on Nuwanidu Fernando’s part-time off-spin, getting a four past the outside edge and then bringing out an elegant loft over long-off for six.

On the very next ball, after Kohli got his fifty, Gill notched up his second ODI century off 89 balls. The duo pressed the accelerator pedal by taking four boundaries off Vandersay in the 32nd over before Gill was bowled by an off cutter which kept low off Rajitha for 116 in the 33rd over.

From there, Kohli unleashed carnage on Sri Lanka bowlers, as fielders dropped catches apart from a nasty collision between Ashen Bandara and Vandersay. Loose balls were being dispatched for boundaries by Kohli, while he also came down the pitch to get his runs in the quick clip. There was quick running between the wickets which added more fluency to his century and brought off only 85 balls.

Kohli then produced the shot of the innings – dancing down the pitch to slam a slower ball from Rajitha over long-on for six, whose follow-through had shades of M.S. Dhoni’s helicopter shot. More fireworks came from him, slicing and lofting off Karunaratne for sixes before punching him through cover for four more.

Though Shreyas Iyer, Suryakumar Yadav and K.L. Rahul fell, there was no stopping Kohli, who was lofting, driving, flicking, and then got his 150 with a six whacked over deep mid-wicket off Kumara in the final over. He applied the finishing touches with a pull and dab going for four and six respectively, amassing 84 runs off the last 34 balls he faced.

Under scoreboard pressure, Sri Lanka just wilted and couldn’t put up a fight.