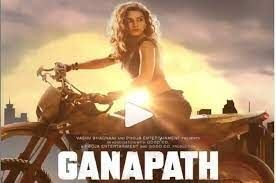 The actor is set to channel a never-before action avatar during the film’s shoot, which is currently happening in the UK.

Sanon will be doing some high-octane action sequences in the film along with Tiger Shroff. The stylish slick video shared shows her clad in an uber-cool leather jacket and riding a bike. Her look has left many fans intrigued by her character Jassi’s graph in the thriller.

“Ganapath” is directed by Vikas Bahl and is produced by Vashu Bhagnani, Vikas Bahl, Deepshikha Deshmukh, and Jackky Bhagnani. The film is set to take the big screen Dec. 23, 2022.