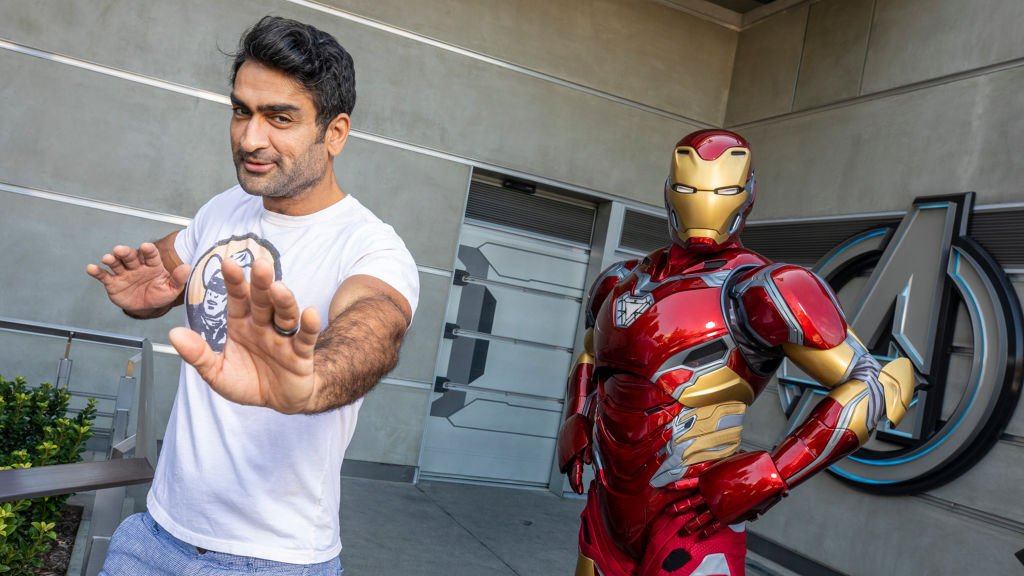 In this handout photo provided by Disneyland Resort, actor Kumail Nanjiani, who stars as Kingo in the upcoming film “Eternals,” encounters Iron Man while touring the Avengers Campus at Disney California Adventure Park for the first time on Aug. 30, 2021 in Anaheim, California. (Christian Thompson/Disneyland Resort via Getty Images)

WASHINGTON – Pakistani American actor and comedian Kumail Nanjiani has revealed that ever since he bulked up for his role in the Marvel film “Eternals,” he feels “uncomfortable” with the attention surrounding his body transformation.

According to People magazine, the actor discussed his physique in a profile with a magazine, saying that he’s less open to talking about his body since he shocked the internet with his dramatic transformation in 2019. “I’ve found out over the last year and a half, since I did that picture, that I am very uncomfortable talking about my body and it’s become less and less and less comfortable,” Nanjiani said.

The “Silicon Valley” comedian first bulked up to play Kingo in “Eternals,” a superhero who blends into the world as a Bollywood star. Nanjiani, who told the magazine he grew up watching Indian cinema, wanted to look like a true Bollywood leading man for the part.

“If I’m playing the first South Asian superhero, I want to look like someone who can take on Thor or Captain America or any of those people,” Nanjiani said, adding, “I was like, I want this to be believable. I want to feel that kind of power in this role.”

His newly buff appearance had caught “Eternals” director Chloe Zhao off guard, he recalled: “Chloe got a little upset at me for getting in shape. I shouldn’t say ‘getting in shape’, for changing my body to look a certain way.”

Zhao explained to the outlet that she thought Nanjiani was a great fit for Kingo regardless of his appearance and that she “wanted to make sure he didn’t feel like he had to bulk up for me.”

While he’s received plenty of praise for his new look, Nanjiani has admitted he’s struggled with the attention, and also experienced body dysmorphia from the drastic change.

“I don’t want to discount people who genuinely have debilitating body issues. I don’t have that. But I did start getting some body dysmorphia. I’d look in the mirror and I’d see my abs and when I looked again, they would fade. I would just see the flaws,” he told a Men’s Health magazine for its April 2020 cover story.

He added that sharing his progress on social media was helpful because of the positive reinforcement he received.

As per People magazine, Nanjiani explained, “When I saw that reaction was when I was like, ‘Okay, I clearly don’t see what’s actually there. It’s something I’m trying to be aware of and be better at because that’s not a good way to be. You want to be easy on yourself’.”