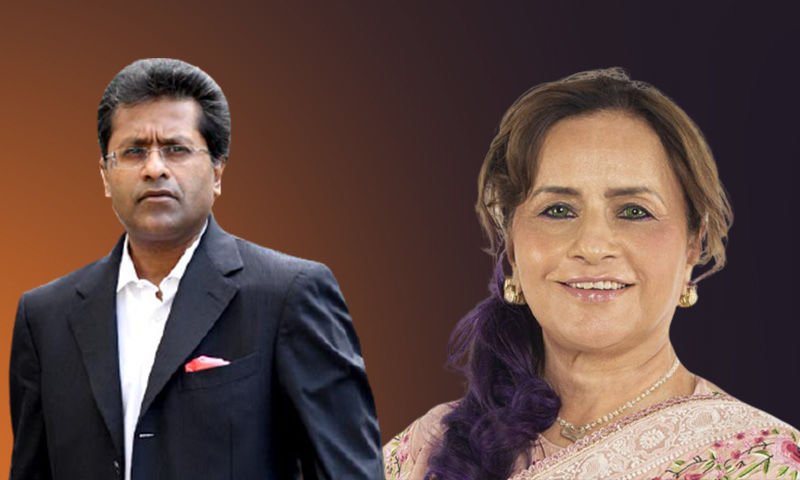 NEW DELHI, (IANS) – Former IPL chairman Lalit Modi’s decision on January 15 to resign as head of his family’s branch and naming his son, Ruchir as successor beneficiary of the K.K. Modi family trust with immediate effect, seems to have reopened the feud within the family with its members pouring their grievances on social media.

Soon after Lalit Modi’s decision to step down as head of his family branch came to light, his mother Bina Modi, when asked to comment on the development, refused to say anything but added that she will go as per legal advice regarding the ongoing court battle involving her son Lalit Modi.

Lalit Modi is involved in a family property dispute with his mother Bina Modi.

He later tagged the news report quoting his mother in a tweet and said, “Surely all can see the ridiculous nature of greed & avarice now? Giving up my inheritance rights, shows me how far-sighted my father was and how pathetic legal wrangling can derail his dying wishes.”

Lalit Modi’s brother Samir Modi tagged the tweet and wrote, “I signed the trust deed & gave up my inheritance rights because my father wanted to protect them. I never ever imagined that my mother would abuse this wish and put me on the road. It’s truly broken me and my faith in her. Can’t imagine what money & greed has done to her.”

Lalit Modi also shared a deleted tweet of his younger brother Samir on his Instagram page where the latter had said, “I used to laugh at my own saying- blood is thicker than water and money is thicker than blood.”

Reacting to Samir’s post, Lalit Modi said in his Instagram post, “This is truly sad that Samir Modi has to actually live in the same place. I am really worried about his life. He is a very emotional person. And unwell. Shocking-level people who give birth to u blackmail u. Samir Modi- from me to you- ‘THIS TOO SHALL PASS’. You remember this mantra I used to say every time we went through a tough time. I still live by it.”

On January 15, Lalit Modi had written a letter to his mother Bina and siblings, sister Charu and brother Samir, informing them about his decision to resign as head of his family’s branch and naming his son Ruchir as his successor beneficiary of the K.K. Modi family trust.

“The present litigation with my mother and sister is tedious, strenuous and has gone on for long, and even though there have been several rounds of discussions for settlement, there is no end in sight. It has caused and continues to cause me immense distress… I have discussed this with my daughter and she and I are of the opinion that I should hand over the control of affairs of the LKM (Lalit Kumar Modi) family and its beneficial interest in the Trust to my son Ruchir Modi,” Lalit Modi had written in the letter.