HomeArts/BooksLessons From Tintin and Asterix

Lessons From Tintin and Asterix 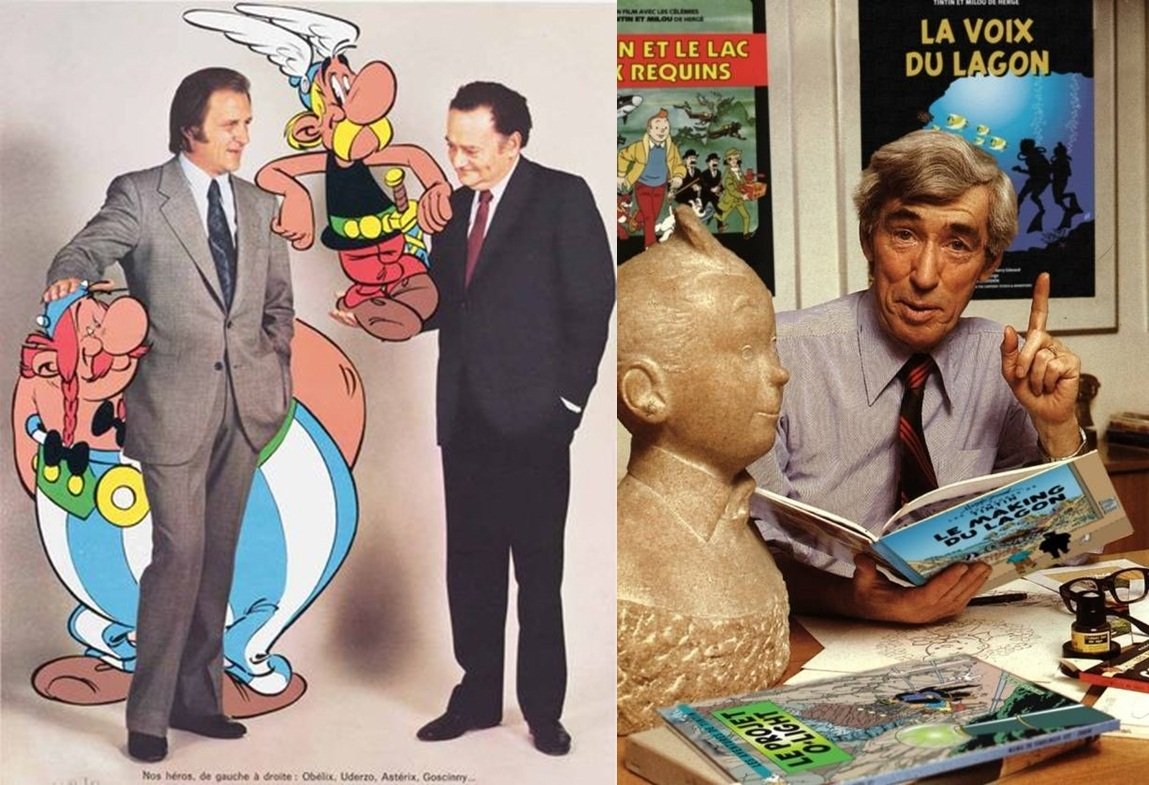 Lessons From Tintin and Asterix

Comics originated in the US, and it, along with Japan and its manga, still holds the top position as far as their proliferation — and its adaptation by other media — goes. But let’s look at another tradition — the Franco-Belgian, and its two most famous characters — the diminutive but doughty Gaulish warrior, and the intrepid and globe-trotting boy reporter.

With their well-researched settings, meticulously drawn plots and characters, and of course abundant wordplay, the Frenchmen Rene Goscinny and Albert Uderzo, and Belgian Georges Remi alias Herge, not only elevated the form to literature but made Asterix and Tintin the world’s most well-known Frenchman and Belgian, respectively.

Let us begin with Tintin, whose fans have included Satyajit Ray, Steven Spielberg, and Charles de Gaulle, who considered him to be his only serious rival. And then, our hero, in his lunar visit, also made a “discovery” (lunar ice) that was scorned then but would be validated by India’s Chandrayaan half a century later.

The two dozen installments of the series have sold hundreds of millions of copies in the more than 70 languages they have been translated into, and the reason is not difficult to ascertain.

Herge’s trademark “ligne claire” (clear line) drawing style, creating a most realistic feel, is complemented by engrossing, well-researched stories, which quite unobtrusively deal with serious social and political themes: Crime, wars, drugs and slave trade, racism, political subversion and regime change, fuel crises and so on. And he kept pace with the times in the stories that span from the 1930s to the mid-1970s and respected diversity — Tintin is even shown doing yoga.

And in the series, Herge also drew from his own life — and found some peace too.

Emerging out of a weekly cartoon strip in the children’s supplement of a Belgian Catholic newspaper, the initial two adventures — set in Soviet Russia and the then Belgian Congo — were not very refined, being an unabashed anti-Communist attack and an unashamed justification of colonialism and the “White Man’s Burden”, respectively.

It was from the third installment that there was a change in ideological orientation to a more multiracial-tolerant setting.

Featuring Chicago gangster boss Al Capone — the only prominent real-life character appearing in the series, apart from a brief appearance by the creator himself much later — “Tintin in America” combines all current perceptions of the US in a blistering denunciation of capitalism, consumerism, and criminality, not to mention racism and exploitation of indigenous people.

Tintin’s adventures next take him to Egypt and India (“The Cigars of the Pharoah”, where the blundering detectives Thompson and Thomson come onstage — and so do cow vigilantes!) in a struggle against drug smuggling, which is continued in “The Blue Lotus”, set in China. The latter was unprecedented in a depiction of Chinese people far removed from the racist stereotypes prevalent in then Europe, though the Japanese, who were more westernized, don’t come off so well.

The Japanese aggression against China, particularly the self-engineered Mukden incident, which served as a pretext for the occupation of Manchuria, is rendered with starkness and led to an official complaint from the Japanese embassy in Brussels.

Space constraints won’t permit a recap of all Tintin’s colorful adventures and characters, but we can try a few prominent ones.

“The Broken Ear”, set in two fictional South American countries, combines crime and high politics, while satirizing the frequent (violent) regime changes in the region, backed by foreign interests, seeking to spark war between countries — and supplying both with weapons.

“King Ottokar’s Sceptre”, with its political subtext chronicling contemporary happenings, was unexpectedly not banned by Nazi censors in occupied Belgium, but Herge played it safe and the next half-dozen odd installments — from “The Crab With the Golden Claws” (where Captain Haddock makes his appearance) to “Prisoners of the Sun” — abandon political themes for pure adventure.

In the 1950s, Herge returned to contemporary happenings — the Cold War, the arms race, political subversion, human trafficking can all be found.

Tintin also had a therapeutic effect on Herge. Having been “forced” to marry co-worker Germaine Kieckens by his conservative editor, despite both being unhappy about it, he had numerous affairs. This caused him to feel guilty and have recurrent nightmares of what he described as “the beauty and cruelty of white” — visions of white and snow.

He even consulted a psychologist and was counselled to leave his art but rejected the advice and found expiation of sorts in drawing the desolate landscapes of “Tintin in Tibet”.

“Tintin and the Picaros”, the last completed adventure, is full of political intrigue — and messaging — down to its final panel: a new regime, but slums still filled with wretched people, with the only change seen being in the uniforms of the apathetic police and names on the victory signs.

Asterix and his extremely well-built (never call him fat!) friend Obelix, created by writer Goscinny (1926-77) and illustrator Albert Uderzo (1927-), have regaled the world since his first appearance in French comic magazine ‘Pilote’ in October 1959, before branching out to his own series of albums, as well as films — both animated and live action.

The series survived Goscinny’s death, and the 2008 retirement of Uderzo, who had taken both roles, with his assistants nominated to carry on with it.

It was set in 50 BCE in an unnamed village in Armorica (what is now Brittany in France), termed the sole area in Gaul that Roman ruler Julius Caesar had failed to subdue due to a magic potion of the local druid, which gave its users short-term superhuman strength.

Apart from local adventures, Asterix and Obelix (and sometimes other villagers) go out on missions in other parts of Gaul and what are now Belgium, Britain, Germany, Switzerland as well as to North America, Middle East, and India.

There is a lot of bashing up of Romans, pirates, assorted barbarians or whoever else comes in their way, the series is not mere slapstick. Its humor works on some more subtle devices — the witty dialogue, the puns, the running gags, the caricatures, the accurate, tongue-in-cheek but affectionate stereotyping of various peoples, who are depicted like their contemporary counterparts — the proper, reserved British, the clean and hospitable Swiss, and the rule-obeying Goths (Germans).

The humor, typically French-specific, raised concerns if the work could be feasibly translated, but the gifted duo of Anthea Bell (1936-) and Derek Hockridge (1934-2013) succeeded, with the English versions maintaining the original’s spirit and jokes, and devising equally irresistibly funny puns where needed.

And what doesn’t need translation are the references from art and poetry as well as films, music as well as historical characters — prototypes of Mussolini, Napoleon, Sigmund Freud, Laurel and Hardy, Thomson and Thompson, Winston Churchill as well as the Beatles, the Rolling Stones and Elvis Presley, besides Charlton Heston as Ben Hur, Kirk Douglas as Spartacus, and Sean Connery as James Bond, can be seen.

Then, keeping the series relevant are the well-aimed pokes at social, economic, and political issues, as relevant now as when written — luxury accommodation including its land acquisition, environmental costs, labor relations, or marketing gimmicks, and business jargon.

Who says comics are only for children? (IANS)