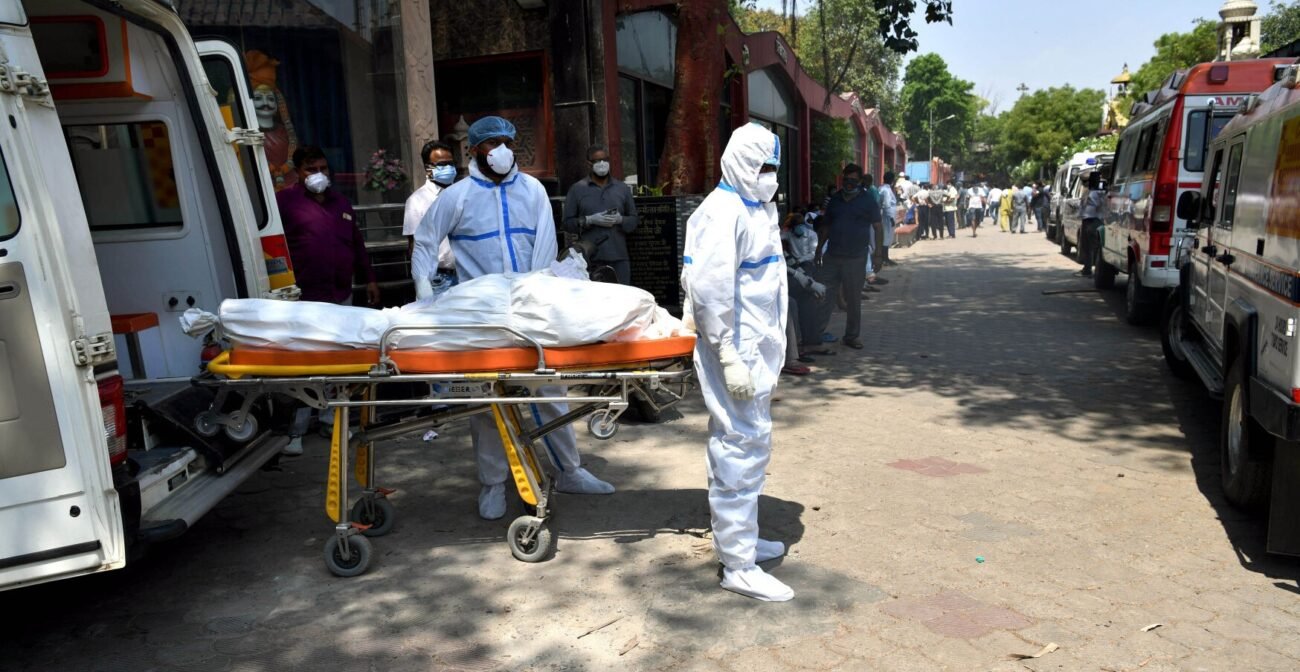 Health workers and relatives wearing personal protective equipment carry the body of a man who died from the coronavirus disease, at Nigambodh Ghat in New Delhi April 22. (Rahul Singh/ANI photo)

The 314,835 infections added in the past 24 hours raise India’s total past 15.9 million cases since the pandemic began. It’s the second-highest total in the world next to the United States. India has nearly 1.4 billion people.

A large number of hospitals are reporting acute shortages of beds and medicine and are running on dangerously low levels of oxygen.

The New Delhi High Court April 21 ordered the government to divert oxygen from industrial use to hospitals to save people’s lives. “You can’t have people die because there is no oxygen. Beg, borrow or steal, it is a national emergency,” the judges said, responding to a petition by a New Delhi hospital seeking the court’s intervention.

The government is rushing oxygen tankers to replenish supplies to hospitals.

Indian Health Minister Harsh Vardhan said April 22 that “demand and supply is being monitored round the clock.” He said in a tweet that to address the exponential spike in demand, the government has increased the quota of oxygen for the seven worst-hit states.

Lockdowns and strict curbs have brought pain, fear and agony to many people in New Delhi and other cities.

In scenes familiar across the country, ambulances are rush from one hospital to another, trying to find an empty bed. Grieving relatives line up outside crematoriums where the number of dead bodies has jumped several times.

“I get numerous calls every day from patients desperate for a bed. The demand is far too much than the supply,” said Dr. Sanjay Gururaj, a doctor at Bengaluru-based Shanti Hospital and Research Center.

“I try to find beds for patients every day, and it’s been incredibly frustrating to not be able to help them. In the last week, three patients of mine have died at home because they were unable to get beds. As a doctor, it’s an awful feeling,” Gururaj said.

Yogesh Dixit, a resident of northern Uttar Pradesh state, said earlier this week that he had to buy two oxygen cylinders at 12,000 rupees ($160) each, more than twice the normal cost, for his ailing father because the state-run hospital in Lucknow had run out of supplies.

He bought two “because the doctors can ask for another oxygen cylinder at any time,” he said, adding that he had to sell his wife’s jewelry to meet the cost.

The main cremation ground at Lucknow, the state capital, received nearly 200 bodies April 18. “The bodies were everywhere, they were being cremated on sidewalks meant for walking. I have never such a flow of dead bodies in my life,” said Shekhar Chakraborty, 68.

In Kanpur, also in Uttar Pradesh, 35 temporary platforms have been set up on Bithoor-Sidhnath Ghat along the Ganges River to cremate bodies.

It also said that 75 railroad coaches in the Indian capital have been turned into hospitals providing an additional 1,200 beds for COVID-19 patients.

The Times of India newspaper said that the previous highest daily case count of 307,581 was reported in the U.S. on Jan. 8.