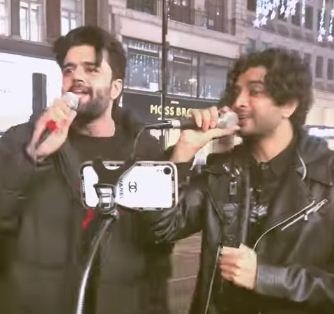 LONDON, (IANS) – Anchor-singer-actor Maniesh Paul, who has carved out his identity across platforms and borders, recently delighted fans by choosing to join a local performer and doing an impromptu gig.

Maniesh Paul, who is on a visit to London, was strolling the streets of the city, when a local performer identified him and could not contain his excitement.

The crowd of fans also was pleasantly surprised to see the ‘Jugjugg Jeeyo‘ actor, which inspired Maniesh, who’s known for his melodious voice, to join the local performer and sing a few songs.

The fan took to Instagram to thank the star saying, “Thank You superstar Maniesh Paul for joining in and singing with me! So happy that India’s no. 1 host blessed my mic! So lovely to meet you. Love you bro!”

Maniesh Paul also posted the video to his story, expressing his gratitude for the overwhelming love and response.