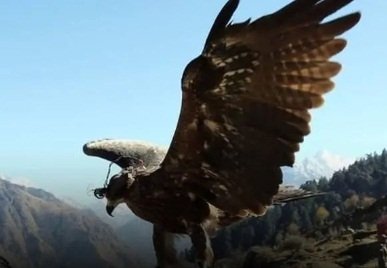 KOLKATA, (IANS) – After the Indian Army displayed its latest ‘weapon’ at Auli in Uttarakhand during Ex Yudh Abhyas with the US Army, there was at least one person in the country following the media coverage and video footage keenly.

This ‘weapon’ displayed by the Indian Army is a living being named ‘Arjun’. He is a Black Kite – a medium-sized raptor found across Asia. He has been trained to attack and bring down quadcopter drones flying in from across the border with narcotics or weapons caches.

Arjun has already mastered the technique over the last two years but will continue to receive training along with his feathered friends. Their other job will be surveillance and recording all movements along the borders and beyond. They have been fitted with cameras for this.

The man keeping watch on this development keenly was Shahid Khan, India’s only registered falconer who has been allowed to keep Falcons and display the lost sport of falconry.

Falconry in India dates to 600 BCE, historians say. It was practiced by royals in the state of Rajasthan. Khan is from Rajasthan and has been fighting a lone battle to protect falcons that may also be trained to bring down flying objects, whether birds or drones.

India granted permission to Khan to own falcons and display falconry. Khan may never have propagated the idea of using birds of prey for military use, but he was keen about using them to ward off bird strikes near the major airports. He has always felt that such efforts will help bring back the elegant raptors to the Indian skies.

India is not the first country to put birds to military use. The Netherlands has also used raptors to tackle drones. So has the French Air Force.