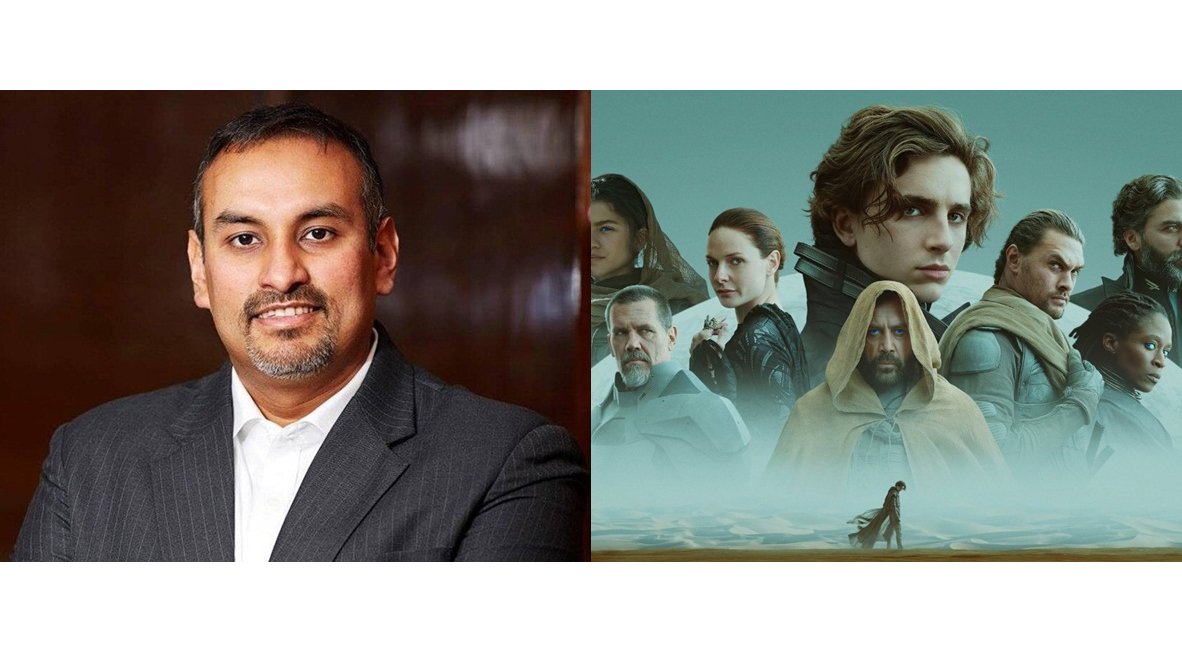 The VFX for ‘Dune’ has been done by DNEG, a studio headed by Namit Malhotra, third-generation film industry entrepreneur. This year, incidentally, two of DNEG’s projects found their way into the recent edition of the Oscars — ‘Dune’ and ‘No Time to Die’ — but it was Villeneuve’s epic that eventually clinched the prized gold statuette.

Eldest son of Bollywood director Naresh Malhotra (‘Yeh Dillagi’, ‘Achanak’, ‘Kranti’ and ‘Dil Ka Rishta’) and grandson of M.N. Malhotra, the cinematographer, Namit is the founder of Prime Focus Limited, which is billed as the world’s largest independent integrated media services company. DNEG was born out of the merger of Prime Focus and Double Negative, a London-based VFX studio.

Namit spoke about what the Oscar win means for DNEG.

“‘Dune’ is a very special film for us. I have been talking about how there is a pre-‘Dune’ and a post-‘Dune’ world in the VFX space simply because of what we were able to achieve. I am very proud of the work that my team has been able to put together with ‘Dune’.”

He added: “For a film such as ‘Dune’, it wasn’t just an effort to create big VFX moments, but to be able to do justice to the story and tell it through our visual work. This is just the beginning of what is to come and there’s no stopping now.”

Namit’s journey has been a long one marked by constant learning and a keen eye for business combined with excellence. After enrolling in a computer graphics school in 1995, Namit launched his own editing studio called Video Workshop, operating from his father’s garage. He partnered with three of his teachers from the graphics school and brought them on board as co-founders.

The mid-90s was the beginning of the era of economic liberalization, which, among other things, opened up a wide market for outsourced audio-visual work in India, an opportunity that Video Workshop capitalized on and delivered work for several television shows and serials.

Listing the challenges faced by DNEG while working on ‘Dune’ and ‘No Time to Die’, Namit said: “The biggest was that one is a modern-day action spy thriller and the other transcends into what humanity’s possible future could look like as imagined in 1975.”

A big moment for him, Namit said, was to be able to bring, for the first time in the 60-year history of the franchise, a James Bond movie into the visual effects category at the Oscars.

He continued: “That is a big step forward, knowing that we had a different approach to visual effects when compared to ‘Dune’. James Bond is all about making sure that he’s capable of doing anything. That is the character. That is what he does. It is very close to reality.”

As for ‘Dune’, Namit said the “visual effects crew ensured that all post-production work remained as realistic as possible”.

He added: “Each VFX element was designed to heighten the photorealism of Villeneuve’s immersive vision, which has introduced a whole new generation of fans who have never read the book. Whenever someone watches ‘Dune’ they will discover new things, new details about the world.”

Asked how this win would push the envelope for India and enable the country to project itself as a VFX soft power, Namit responded: “The work we produce is not just out of India, or London. What we do is so seamless that it is impossible for people to differentiate where it was done. Today, if we are going to make Indian movies and stand against Western movies, or any other films in the world, we have got to be able to take on that challenge.”

He added: “I believe we can take it on very comfortably. I feel with the way our business is growing and evolving, we have a tremendous opportunity to do that. Because India has its own treasure of characters and stories and history, there is no limit to what we can create and how much we can create for the audience. We haven’t even scratched the surface yet. But now, I can confidently say that there is no barrier that we Indians cannot breach.”

As for all the VFX aspirants, who follow him closely and wish to work with him some day, Namit has an important life lesson to share: “Nothing comes easy. Artistes have to adapt to the process of unlearning and learning continuously with the evolving demands in the industry where every day there’s something new that comes to the table.”

He concluded by saying: “If you’ve truly got what it takes to transform the future of visual storytelling, we’ve got a platform that will enable you to do so. But It all boils down to passionate professionalism where there are no boundaries to do great work.”