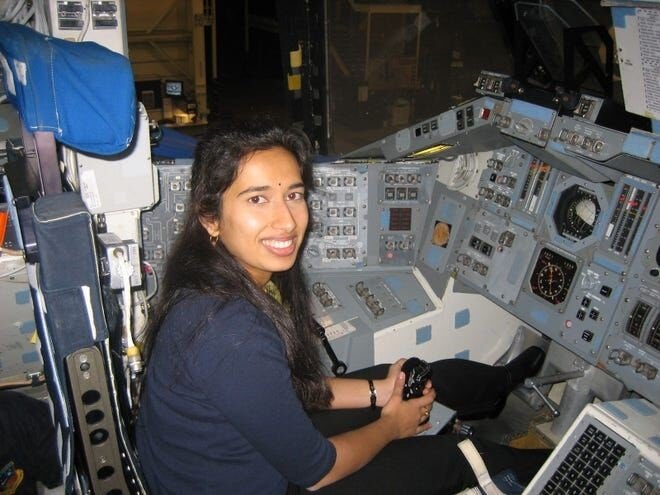 CAPE CANAVERAL, Fla. — A NASA rover streaked through the orange Martian sky and landed on the planet Feb. 18, accomplishing the riskiest step yet in an epic quest to bring back rocks that could answer whether life ever existed on Mars, reported AP.

Ground controllers at the space agency’s Jet Propulsion Laboratory in Pasadena, California, leaped to their feet, thrust their arms in the air and cheered in both triumph and relief on receiving confirmation that the six-wheeled Perseverance had touched down on the red planet, long a deathtrap for incoming spacecraft.

“Now the amazing science starts,” a jubilant Thomas Zurbuchen, NASA’s science mission chief, said at a news conference, after the rover successfully touched down on the surface of Mars after surviving a blazing seven-minute plunge through the Martian atmosphere.

Among the scientists who are part of this historic mission, Indian American Dr. Swati Mohan spearheaded the development of attitude control and the landing system for the rover, reported ANI. “Touchdown confirmed! Perseverance is safely on the surface of Mars, ready to begin seeking the signs of past life,” exclaimed the NASA engineer.

Perseverance, the biggest, most advanced rover ever sent by NASA, became the ninth spacecraft since the 1970s to successfully land on Mars, every one of them from the U.S.

The car-size, plutonium-powered vehicle arrived at Jezero Crater, hitting NASA’s smallest and trickiest target yet: a 5-by-4-mile strip on an ancient river delta full of pits, cliffs and rocks. Scientists believe that if life ever flourished on Mars, it would have happened 3 billion to 4 billion years ago, when water still flowed on the planet.

Over the next two years, Percy, as it is nicknamed, will use its 7-foot arm to drill down and collect rock samples containing possible signs of bygone microscopic life. Three to four dozen chalk-size samples will be sealed in tubes and set aside to be retrieved eventually by another rover and brought homeward by another rocket ship.

Scientists hope to answer one of the central questions of theology, philosophy and space exploration.

Perseverance promptly sent back two grainy, black-and-white photos of Mars’ pockmarked, pimply-looking surface, the rover’s shadow visible in the frame of one picture.

President Joe Biden tweeted congratulations over the landing, saying: “Today proved once again that with the power of science and American ingenuity, nothing is beyond the realm of possibility.”

When the world watched the dramatic landing, in the control room, calm and composed bindi-clad Mohan was communicating and coordinating between the GN&C subsystem and the rest of the project’s team.

Apart from being the lead systems engineer during the development process, she also looks after the team and schedules the mission control staffing for GN&C.

Mohan immigrated from India to the U.S. when she was just one year old. She spent most of her childhood in the Northern Virginia-Washington DC metro area. At the age of 9, after having watched “Star Trek” for the first time, she was quite astounded by the beautiful depictions of the new regions of the universe that they were exploring. She immediately realized that she wanted to do that and “find new and beautiful places in the universe.”

Mohan also had wanted to become a pediatrician until she was 16. It was, however, her first physics class and the “great teacher” she had, that she considered “engineering” as a way to pursue her interest in space exploration.

Mohan holds a Bachelor of Science degree in mechanical and aerospace engineering from Cornell University and completed her M.S. and Ph.D. degrees from MIT in aeronautics/astronautics.

While she has been a member of the Perseverance Rover mission since the beginning at NASA’s Jet Propulsion Laboratory in Pasadena, Mohan has also been a part of various important missions of NASA. She has worked on multiple missions such as Cassini (a mission to Saturn) and GRAIL (a pair of formation flown spacecraft to the Moon).

According to nasa.gov, Mohan has worked on Mars 2020 since almost the beginning of the project in 2013. She is currently the Mars 2020 Guidance, Navigation, and Controls Operations Lead, at NASA’s Jet Propulsion Laboratory in Pasadena.

(With AP and ANI reports)