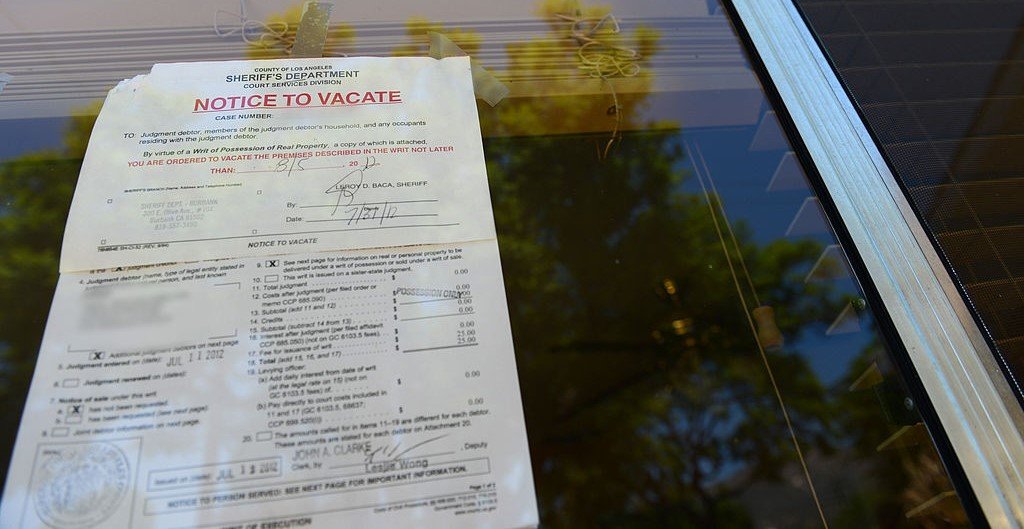 A “Notice to Vacate” is seen in the window of a foreclosed home. Media reports say that by skipping out on payments and interest, Guramrit Hanspal has reportedly saved more than $440,000 over the past 23 years. (representational image/Robyn Beck/AFP/GettyImages)

An Indian American man has been avoiding eviction from his Long Island, New York, home for more than two decades after making only one mortgage payment and repeatedly battling banks and realtors in court, according to court documents.

It now has an estimated worth of almost $400,000, according to Zillow, which lists the home as currently for sale, “Cash Only,” the reports noted.

By skipping out on payments and interest, Hanspal has reportedly saved more than $440,000 over the past 23 years.

He secured his original mortgage from the now-defunct Washington Mutual in 1998 and made only a single payment of $1,602.37, according to the New York Post.

The bank foreclosed two years later, but Hanspal filed for the first of his seven bankruptcies in 2001, using them to avoid eviction under federal rules that protect debtors from being kicked out on the streets, the reports said.

He also sought relief from state courts and, despite having no claim to the property, transferred the deed to a friend in 2004 who continued to play similar bankruptcy games, it adds.

Washington Mutual collapsed in 2008, “a victim of – and a major contributor to – the subprime mortgage crisis,” as U.S. District Judge Frederic Block put it in 2019.

JP Morgan Chase took over its assets and, according to documents, also took over the court battle to evict Hanspal, the New York outlets noted.

Despite losing numerous court battles since then, and being ordered by the Nassau County Sheriff’s Office to vacate the property in 2010, Hanspal has remained in the house, the reports said.

Eventually, Chase sold the property to Diamond Ridge, a real estate company, which has spent nearly $200,000 to continue the fight to evict Hanspal and other people who remain living in the home, according to the Post report.

At least three other people listing the home as their address have also filed for bankruptcy in Brooklyn federal court, winning the “automatic stay,” only to have the claims eventually dismissed, court records show, the Post reported.

“It’s really a group of people that are more than willing to use the courts and abuse the courts to whatever extent they need to extend their illegal occupancy,” attorney Jordan Katz, who represents current property owner Diamond Ridge Partners, said in the Post report.