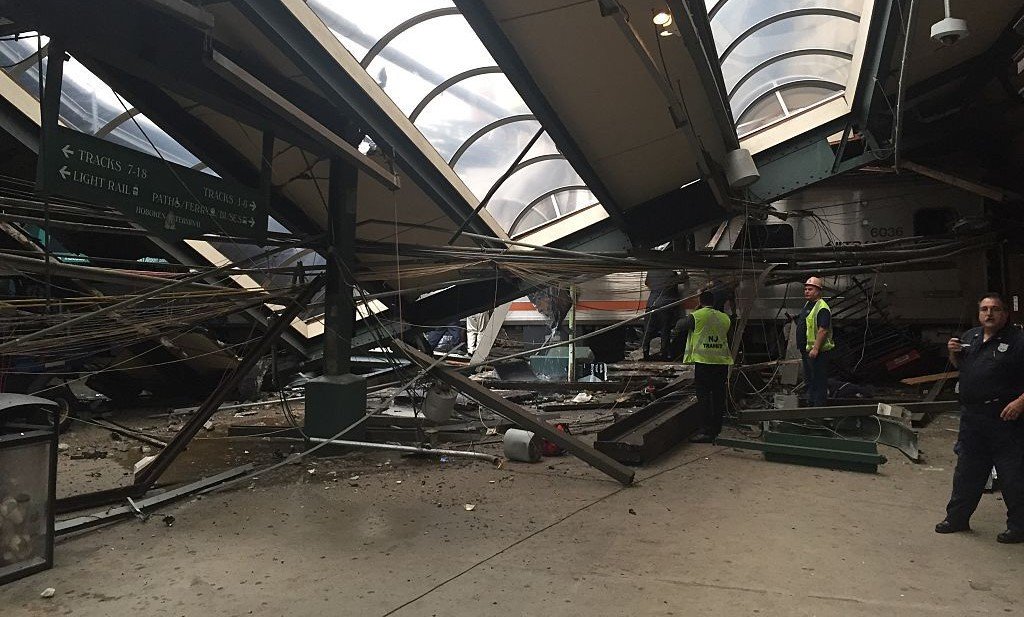 An NJ Transit train seen through the wreckage after it crashed into the platform at the Hoboken Terminal September 29, 2016 in Hoboken, New Jersey. Two Indian Americans, Deepti Chanana Bhalla, of Hoboken, N.J., and Bagyalakshmi Subramaniam, of Bergenfield, N.J., were among those who were gravely injured in the crash. (Pancho Bernasconi/Getty Images)

HOBOKEN, N.J. – NJ Transit has reached settlements in lawsuits filed by the family of a woman killed and people injured in a 2016 crash when a train slammed into a Hoboken, New Jersey, station. Among the injured were two Indian American women.

The agency did not specify the amounts of the settlements but said each was more than $500,000.

Fabiola Bittar de Kroon was killed by falling debris in the Sept. 29, 2016, crash. The 34-year-old Brazil-born lawyer was in the station after having just dropped off her 2-year-old daughter at day care.

The other people who settled lawsuits with the agency for injuries were Sheldon Kest, of Tenafly; Deepti Chanana Bhalla, of Hoboken; and Bagyalakshmi Subramaniam, of Bergenfield.

Attorneys Tom Kline and Bob Mongeluzzi, who represented the De Kroon family, Subramaniam and Kest, said their clients were trying to move on with their lives.

“They remain hopeful that NJ Transit will undertake and continue to undertake the necessary safety measures and precautions to ensure a tragedy like the fatal train crash at Hoboken never happens again,’” they said in a statement.

More than 100 people were injured in the crash. Investigators found that the engineer suffered from sleep apnea.

India-West Staff Reporter adds: In 2018, citing Bhalla’s attorney, Marijo Adimey, northjersey.com reported that she was on the platform at the time of the crash and became trapped under a pile of debris.

Bhalla sustained multiple spinal fractures and her spleen was surgically removed, it said.

“She underwent multiple surgeries during her prolonged hospitalization, followed by a physical therapy regime that continues until today,” Adimey was quoted as saying. “Emotionally, the impact this catastrophe has had on her is immeasurable, requiring her to seek psychological counsel and require psychological medications to get through the day.”

Bhalla “was an innocent victim of gross negligence on the part of the defendants,” Adimey added.