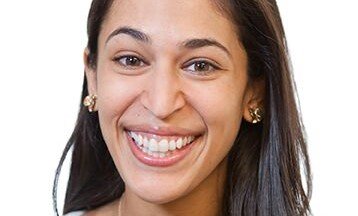 This is the first time a nanotherapeutic has been shown to cross the blood-brain barrier and cause cell death, it said.

Kumthekar explained the results of the study on the podcast.

“I think we can change the way tumors behave by delivering genetic material to them that will influence their behavior,” the Indian American researcher, who is also a member of the Robert H. Lurie Comprehensive Cancer Center at Northwestern University as well as the Northwestern University Clinical and Translational Sciences Institute, said in the recording.

“Beyond that, I’m excited to see that we have therapeutics that can reach the brain—that could have a plethora of implications, including in the world of degenerative diseases,” she said.

In the past decade, no new drugs have been approved for the fatal brain cancer glioblastoma. But the Kumthekar-led team of Northwestern scientists are eager to change that with a new drug, NU-0129.

Patients received the drug intravenously before surgery. Kumthekar and her team then studied patients’ tumors and found that a low dose of the drug caused tumor cells to undergo apoptosis, or programmed cell death, the report said.

Kumthekar in the podcast also explains how the drug, invented at Northwestern’s International Institute for Nanotechnology, uses a novel spherical nucleic acid platform.

Resembling a Koosh ball, the nanoparticle contains a gold core surrounded by SNA, spirals of genetic material. Once the particle passes into the tumor, the genetic material affects the behavior of the tumor cells, it said.

“The sky is the limit,” Kumthekar says of the nanotechnology.

Because of its ability to cross the blood-brain barrier, the technology shows potential for the treatment of other diseases such as Alzheimer’s or Parkinson’s disease, the report adds.

This is the first time in Northwestern’s history that a drug that began as an initial concept in the lab was carried through pre-clinical research, FDA approval and into clinical trials, all within the university, it said.