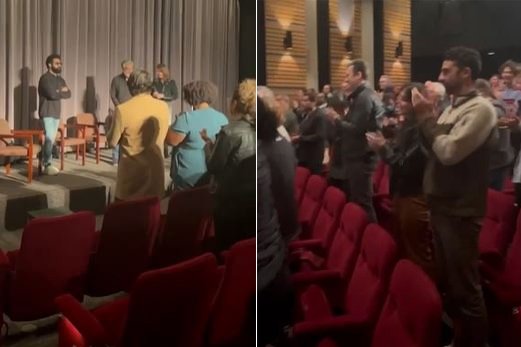 LOS ANGELES, CA (IANS) – NTR Jr and S.S. Rajamouli were welcomed with rounds of applause and shouts of “Bravo!” by members of the Academy of Motion Picture Arts & Sciences, the organization responsible for the Oscars, at a special screening in Los Angeles of their much-talked-about film ‘RRR’.

The actor-director duo took centerstage after the screening to discuss various aspects of the movie which gave insights into the splendid bond they share.

Speaking about NTR, who plays Bheem in the movie, during the discussion, Rajamouli said: “Komuram Bheemudu (the ‘RRR’ hit song) is the best thing that I have ever directed. It’s my all-time favorite of all my films. Because NTR is such a great performer. If you place the camera only on one eyebrow of his, he can perform with that eyebrow. He’s that good.”

NTR Jr. also spoke about shooting the interval sequence where he jumped out of the cage along with the animals.

The Directors Guild of America theatre had more than 100 people in attendance for the ‘RRR’ screening and conversation with NTR Jr and Rajamouli. Those present included international journalists and Academy members.

NTR Jr and Rajamouli are in LA to attend the Golden Globes, where ‘RRR’ is in the race in two categories — Best Film and Best Song (for ‘Naatu Naatu’).