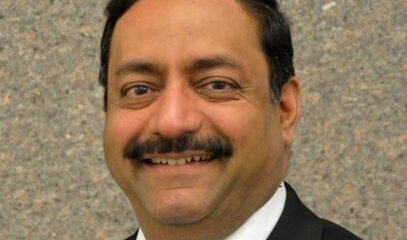 Anupam Srivastava, Indian American Chief Information Security Officer for the state of Ohio, was among the StateScoop 50 awardees, being named State Cybersecurity Leader of the Year. (Twitter photo/@OhioDas)

Srivastava was named the State Cybersecurity Leader of the Year.

The Indian American is the Chief Information Security Officer for the state of Ohio and leads the team that provides information security and privacy services to the state, his bio notes.

As the leader of the information security team, Srivastava’s goal is to enable the state to support productivity and innovation, as well as to achieve the organizational objectives of providing secure services to the citizens of Ohio, Scoop News Group said.

Srivastava holds a master’s degree in computer engineering, is a certified project management professional and has his CISSP. Srivastava became involved in innovation during the pandemic to help expedite digital government by partnering with InnovateOhio, agencies, boards and commissions on key initiatives while holding vendor partners accountable to the state’s cybersecurity standards, it said.

The AI Center of Excellence, led by Indian American Krishna Kumar Edathil, won the State IT Innovation of the Year honor.

In December 2020, The Texas Department of Information Resources formed the Texas Artificial Intelligence Center of Excellence to accelerate the innovation and adoption of artificial intelligence technologies.

The AI-CoE leverages the knowledge of DIR experts and key industry partners to develop AI skills in state agencies’ information technology leaders and has so far resulted in over 20 proof of concepts for AI, robotic process automation and chatbots, the release said.

“For the eighth year, my team and I are honored and excited to recognize these top leaders in our community,” said Goldy Kamali, Scoop News Group’s founder and CEO. “This year more than ever before, each of these leaders went above and beyond. StateScoop’s readers chose well. These awards honor the best leaders from across the state government community who are continuing to make government better.”

This year’s winners span 20 states and eight private sector companies. Colorado, Illinois, Michigan and North Carolina claimed the most winners, with four each. Winners include C-level information technology leaders, as well as up-and-coming leaders in the state government community, the release added.

“As we begin to emerge from one of the most challenging times for government — and specifically government IT — the resilience and strength of these leaders is especially poignant this year,” said Jake Williams, vice present for content and community at StateScoop and EdScoop. “This year’s StateScoop 50 Awards honor the people and projects responsible for getting residents through the crisis and put a spotlight on how those efforts set up an expansive future for digital government.”

Now in their eighth year, the StateScoop 50 Awards honor the most innovative and influential projects in state government and the people with the passion and drive to advance the use of digital technology inside state agencies, a news release said.

The 2021 edition of the awards were presented virtually, as the government IT community continues to recover from the COVID-19 pandemic, it added.

After nominations opened in February, members of the state and local IT community nominated thousands of leaders and projects for the awards. StateScoop narrowed the list to the 180 finalists who received the most nominations, and readers cast more than 3 million votes to select the winners, the release added.