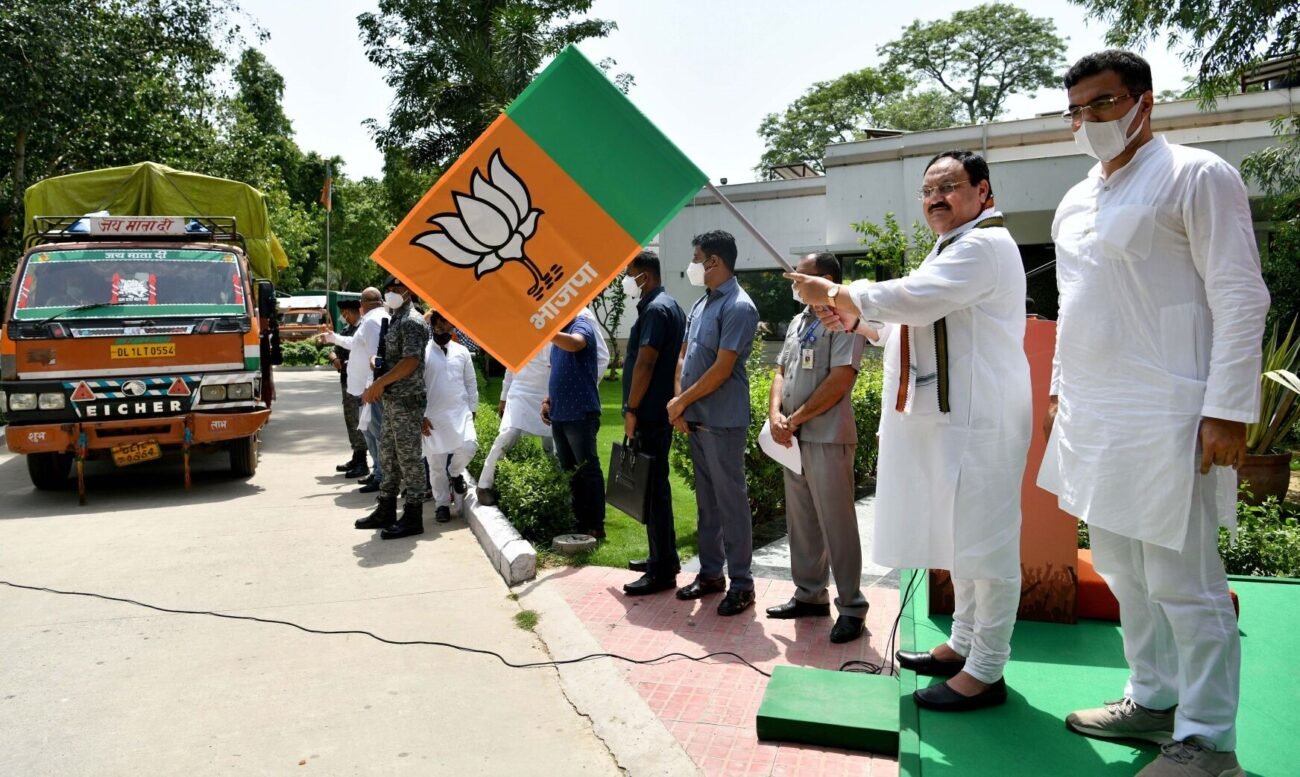 Bharatiya Janata Party president Jagat Prakash Nadda flags off Covid-19 relief material to be distributed among the people of Delhi and to different hospitals in Delhi, on completion of seven years of the Modi government, in New Delhi May 30. (ANI photo)

NEW DELHI – On the seventh anniversary of his government, Prime Minister Narendra Modi May 30 said that the country has followed the mantra of ‘Sabka-Saath, Sabka-Vikas, Sabka-Vishwas’ in all these years.

Speaking at his monthly radio program ‘Mann Ki Baat’, Modi said, “Over these years, the country has followed the mantra of ‘Sabka-Saath, Sabka-Vikas, Sabka-Vishwas’. All of us have worked every moment with dedication in the service of the country.”

“Whatever we have accomplished in these seven years, it has been of the country, of the countrymen. Together, we have experienced many moments of national pride in these years. When we observe that now India moves ahead not with the thought and pressure of other countries but with her own conviction, then we all feel proud,” the prime minister said.

Talking about national security, Modi said, “When we witness that now India gives a befitting reply to those who conspire against us, then our confidence soars. When India does not compromise on the issues of national security, when the strength of our armed forces increases, we feel that yes, we are on the right path.”

Pointing out challenges faced during the period, Modi said, “Where there are successes, there are also trials. In these seven years together, we have overcome many difficult tests as well, and each time we have all emerged stronger.”

Referring to the Covid pandemic, the prime minister said, “In the form of the Corona pandemic, we are being continuously put to test. This is a crisis that has plagued the whole world, so many people have lost their loved ones. Even big countries were not spared from its devastation. In the midst of this pandemic, India is moving forward with the resolve of ‘Sewa and Sehyog’ (service and cooperation).”

He said, “In the first wave, we fought courageously; this time too India will be victorious in the ongoing fight against the virus. Be it social distancing, rules related to masks or vaccines, there should be no letup in our efforts. This indeed is the path to our victory.”

To mark the seventh anniversary of the Narendra Modi government, the BJP has planned an extensive outreach exercise by carrying out Covid-relief activities which will also take place in areas bordering the Line of Control in Jammu and Kashmir and other remote villages across the country.

As per the plan to mark the seventh anniversary, the BJP will organize special Covid-relief activities in one lakh villages across the country.

BJP Jammu and Kashmir co-in-charge Ashish Sood told IANS that several activities related to Covid-prevention and relief have been planned across the state including the Kashmir Valley as per the directions of the central leadership.

“These activities are planned as per Prime Minister Modi’s vision to reach out to everyone. At the time of pandemic, the Jammu and Kashmir unit of the BJP will reach out to people living in villages of Samba and other districts bordering LoC,” Sood said.

Sood said party workers will educate people about preventive measures and help villagers and others in J&K to overcome vaccine hesitancy.

Apart from village outreach programs, BJP workers across the country will distribute ration and organize blood donation camps. The BJP has also asked its ministers in the Modi government and MPs and MLAs in party-ruled states to visit at least two villages across the country following all Covid protocols. The party workers will distribute masks, sanitizers and other essential items required in the wake of the pandemic under Sewa Hi Sangathan 2.0, said a statement.

The Center, meanwhile, in addition to the measures announced under PM CARES for Children- Empowerment of Covid affected children, the government has announced further measures to help families who have lost the earning member due to Covid, a Prime Minister’s Office statement said.

In other news, at a time when the Covid-19 pandemic and its fallouts are having huge impact on the lives of the people across India, nearly one-third of the population has supported Prime Minister Modi’s two key decisions – imposing nationwide lockdown during the first wave last year and not imposing a similar countrywide shutdown during the ongoing second wave this year – as per the ABP-C Voter Modi 2.0 Report Card.

According to the ABP-C Voter survey, 68.4 percent of the respondents feel that Modi government’s decision to impose a countrywide lockdown last year was right, while 53.4 percent said that not imposing nationwide lockdown this year was the right decision taken by Modi.

In related news, IANS reported May 30 that on completion of seven years of the Modi government, the Congress has said that the Modi government is “harmful for the country” and has accused it of “committing 7 criminal blunders in 7 years.”

The Congress has said that the Modi government has failed on all fronts – from the economy to securing national security while surrendering to China.

Blunders like demonetization and a shoddy GST implementation and a national lockdown at a 4-hour notice has hurt the Indian economy badly. As a result, even Bangladesh has now overtaken India in per capita income, Surjewala said.

He added that the Modi government promised 2 crore jobs every year. On the contrary, under Modi’s rule, India saw the worst unemployment in 45 years in 2019. As per CMIE, during COVID-19, close to 12.2 crore people lost their jobs and almost 75 percent of the 12.2 crore people were small traders and wage-laborers.