On 9th Anniversary of Oak Creek Gurdwara Shooting, Biden Calls on Americans to Stand Up Against Hate, Bigotry 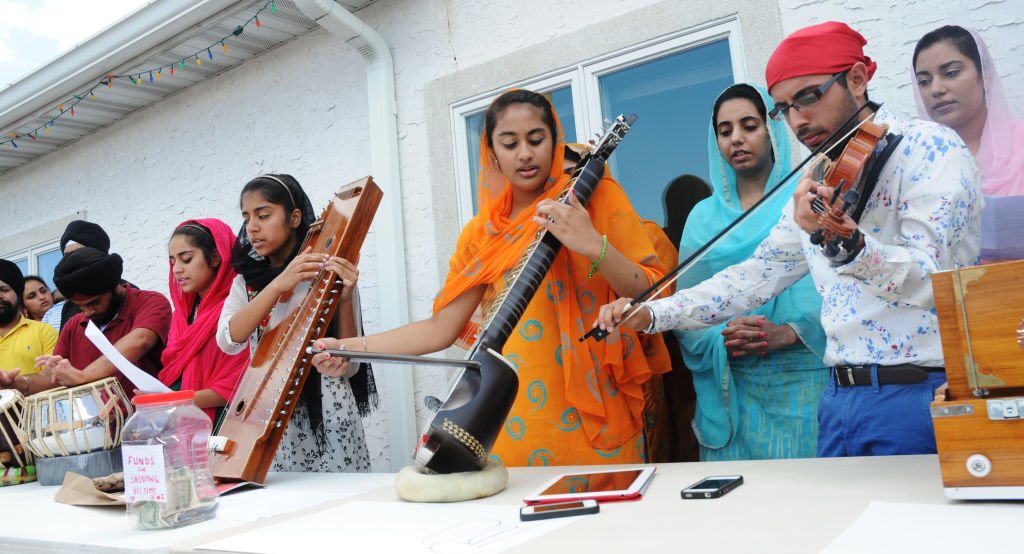 On 9th Anniversary of Oak Creek Gurdwara Shooting, Biden Calls on Americans to Stand Up Against Hate, Bigotry

File photo of children of the Blue Mountain Gurdwara in Bethel Township leading a musical tribute at the memorial service in the wake of the shooting at the Oak Creek Gurdwara, on Aug. 12, 2012. (Harold Hoch/MediaNews Group/Reading Eagle via Getty Images)

WASHINGTON – President Joe Biden, during his Aug. 5 meeting with leaders from the Asian-American and Pacific Islander community at the White House, called upon Americans to stand up against hate and bigotry, while standing for the freedom of individuals to practice their faith without fear or danger. The president noted it was the ninth anniversary of the shooting of ten worshipers at a Sikh temple in Oak Creek, Wisconsin.

Seven people lost their lives in “a hateful act of bigotry at the Sikh temple in Oak Creek, Wisconsin,” he said.

“Today, we honor everyone impacted by this tragedy. And we think about all the pain during this pandemic, with the rise of hate crimes, harassment, bullying, and other forms of bias against Asian Americans. It seems not to stop,” President Biden asserted.

Referring to the shooting at the Oak Creek Gurudwara on Aug. 5, 2012, the executive director of the Sikh Coalition, Satjeet Kaur, told ANI that “it’s the ninth anniversary of the shooting at the Oak Creek Gurudwara and all these years, there is a rise of hate crimes in this country against many communities.” Kaur, who was present for the meeting with Biden at the White House, said, “We are here to talk about it and undertake steps that could reduce these numbers of crime.”

Dr. Rajwant Singh, chairman of the Sikh Council on Religion and Education, said, “We are thankful to President Biden for his compassion and a strong stand against hate and violence. The Sikh community was shaken by this tragedy and our community still is concerned about the hate-filled rhetoric being condoned by some political interest groups.”

He further stated, “The White supremacist groups are on the rise in recent years and are intimidating many other minority groups in America. President Biden and Vice President Harris’s stand is unambiguous on this critical issue in this country. This is the most important message that our political leaders can send across the nation and the world.”

Gurwin Singh Ahuja, co-founder and the executive director of the National Sikh Campaign, said, “Violence against Sikhs had been on the rise for several years. After 9/11 many Americans associated a turban and beard with terrorism and an alarming number of people turned to racism and violence against our community.”

Wisconsin’s governor also released a statement of remembrance in a tweet as well.

Nine years ago on Aug. 5, a gunman identified as a white supremacist, walked into the Sikh Temple of Wisconsin and opened fire, killing six people, wounding many, and terrorized an entire community before turning the gun on himself.

The temple in Oak Creek, one of two large Sikh congregations in the Milwaukee area, was founded in 1997 and has over 400 members. There are close to 650,000 Sikhs in America.

In statement issued Aug. 5, SALDEF also marked the ninth anniversary of the shooting at the Oak Creek Gurdwara where the Sikh community lost six members: Satwant Singh Kaleka, Paramjit Kaur, Prakash Singh, Ranjit Singh, Sita Singh, and Suveg Singh Khattra. It added that Baba Panjab Singh, a granthi of the Gurdwara, who was paralyzed during the attack, passed away from his injuries last year.

“Not only do we remember the sangat we lost that day,” the statement said, but “We also mourn with our brothers and sisters who lost friends and family members during subsequent attacks, in Florida, Washington, Idaho, Texas, Ohio, and the recent Indianapolis FedEx shooting.

“I appreciate when the world shows up on August 5th or after a mass hate attack happens, but I hope the legacy is that we all continue to show up even when we see small moments of suffering,” said Pardeep Kaleka, the son of Satwant Singh Kaleka.

SALDEF added, “We are reminded of the spirit of chardi kala shown by the sangat and families in Oak Creek and their commitment to serving others during a time of tragedy. We are reminded that while coming together in remembrance, we must commit ourselves to action. Today, we recommit ourselves to promoting inclusion and safety for all who call this country home. No matter where someone lives or what they look like, they should not live in fear because of their identity. We will continue to fight against division and white supremacy, the virulent hate that motivated the attack nine years ago. We will work to ensure that these tragedies do not happen again.”