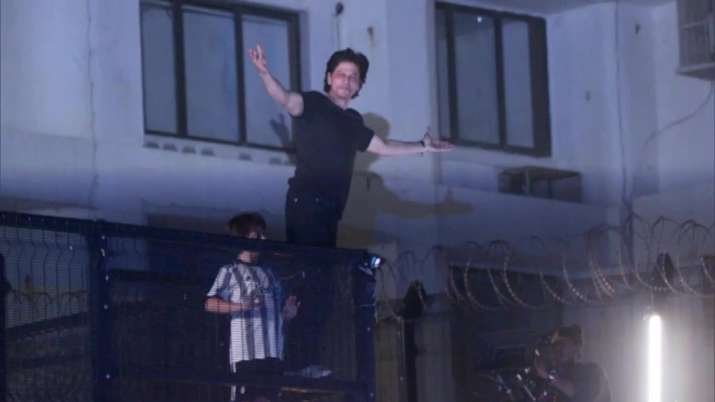 MUMBAI, (ANI) – On ‘King Khan’, Shah Rukh Khan‘s 57th birthday, Bollywood celebs and fans took to their social media accounts gushed over the actor. The super fans held events and showed up outside his home here, where he made appearances with his youngest child Abram.

In his typically humble and articulate manner, SRK showered back the love and gratitude to his fans pointing out that they had made him.

For many, it was not just his on-screen persona that mattered but his off screen behavior and family man real-life role. His daughter Suhana Khan posted a sweet message for her best friend on social media long with a throwback picture. It features her along with her father Shah Rukh and brother Aryan. The siblings can be seen posing with SRK. She captioned it: “Happy birthday to my best friend,” and added with a heart emoji: “I love you the most.”

Taking to the story section of his Instagram, Vicky Kaushal shared an image of the megastar greeting his fans with an angelic yellow light behind him almost giving an appearance of a God with a halo behind him. Vicky wrote on the picture, Happy birthday to you sir. There’s no one like you @iamsrk”.

Actor Kriti Sanon shared a video on her stories and wrote, “Happiest birthday to the man who made me believe in love.”

Actor Kajol shared a video and captioned it,” Happy Birthday from grown up Anjali to grown up Rahul.”

Madhuri Dixit shared a picture and captioned it, “To the warmest person I have ever met with a big heart and determination and grace. Happy Birthday, Shah Rukh may this year bring you stupendous success, prosperity and happiness.”

Shilpa Shetty Kundra shared a picture and wrote, “Happiest birthday to my first reel and real hero! Wishing you grate health, even more success, and all the good things the kaaynaat has to offer Pathaan Saab.”

Sidharth Malhotra shared a snap from the sets of ‘My Name is Khan’ and wrote, “An inspiration & an idol for me and millions like me! Wishing you a very happy birthday @iamsrk sir.”

Riteish Deshmukh shared a throwback picture and wrote, “There is only love in this picture- Happy Birthday my favorites @iamsrk – big, big hug!”

Director-choreographer Farah Khan, who has made films like ‘Main Hoon Na’, ‘Om Shanti Om’ and ‘Happy New Year’, who has directed SRK in all the movies, took to her Instagram on November 2 and shared a video featuring a collection of her throwback pictures with the birthday boy. Penning down a sweet caption, Farah mentioned: “Mine!! (Heart emoji) my Shah, my friend, mega star, the man who made me a filmmaker, who is a King but so humble, who has the guts to laugh the loudest at himself, larger than cinema itself. happy birthday @iamsrk am so proud to be your friend…thank you for all that you are”.

Karan Johar wrote: “The film was KARAN ARJUN… the set was in Film City… my father and I arrived (me playing the part of a plus size hanger on) for a professional meeting (the signing on the dotted line for the film DUPLICATE) I had many apprehensions about movie stars … many of them based on fact and some of course Stardust (sic). So, I wondered about this new breakthrough star who was apparently a lot like his first big hit (DEEWANA for the uninformed) … he was in costume and met my father warmly and gave him a massive jhappi.”

After greeting KJo’s father Yash Johar, SRK turned to young KJo, and greeted him not knowing that this friendship will go down in the pages of the history of Bollywood as the one that clouded all friendships including the iconic on-screen equation of Jai-Veeru from ‘Sholay’. KJo further mentioned: “He shook my hand and with his immensely kind eyes asked me many questions about my nonexistent career and my unproductive life (at that time) My answers were as bland as khichdi for an upset stomach but he listened with so much attention that I felt at that time that I had cracked the Da Vinci code.

That was 29 years ago… Today I call him Bhai and he still listens to me with wrapped attention (even when I am discussing my trials and tribulations of hosting a talk show) his kind eyes are even kinder…and he is…PERSONALITY! That word just means SRK.”

“For me, he is more than family and will always be my fiercest critic and my hugest inspiration…I owe my entire being to Adi and bhai… And today I celebrate him and his extraordinary teaser of what I believe is going to be a juggernaut blockbuster! Hail the King!!! Because there isn’t and will never be another! Love you Bhai (heart emojis) @iamsrk (sic)”, KJo concluded his note.