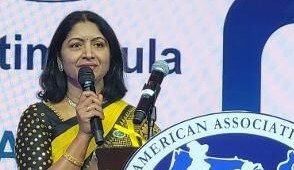 AAPI president Anupama Gotimukula lauded the Indian American physician community for spending “hundreds of hours in coordinating and disbursing the vital medical supplies to the most needed hospitals across India.” (photo provided)

The American Association of Physicians of Indian Origin, the largest organization of Indian American physicians, has raised over $5 million in Covid relief funds, according to Anupama Gotimukula, president of AAPI.

“The generosity of the members of AAPI has been unprecedented,” she said in a press release, adding, “I want to thank the AAPI fraternity, for not only contributing $5 million towards Covid relief funds, but has spent hundreds of hours in coordinating and disbursing the vital medical supplies to the most needed hospitals across India.”

“We have been working very hard in sending oxygen concentrators and ventilators to India, to deal with the calamity in India, and are in the process of helping to set up oxygen generator plants in different hospitals in India,” added Ravi Kolli, president-elect of AAPI.

Sujeeth Punnam, AAPI’s regional director, who has been one of the many AAPI leaders coordinating the efforts, said, “Thus far, AAPI has provided 3,200 concentrators, 100 ventilators and 100 high flow nasal canula machines to 45 hospitals in India as part of the Covid pandemic relief efforts.”

As some predict a 3rd wave of the pandemic in India, AAPI has been planning and collaborating with several agencies and the Government of India to help reach the much needed care and supplies to the remotest places in India, the release added.

Satheesh Kathula, secretary of AAPI, noted, “AAPI has been coordinating several efforts, including tele-health to patients and doctors in India. Thanks to the overwhelming support of its members that AAPI has raised over $5 million.”