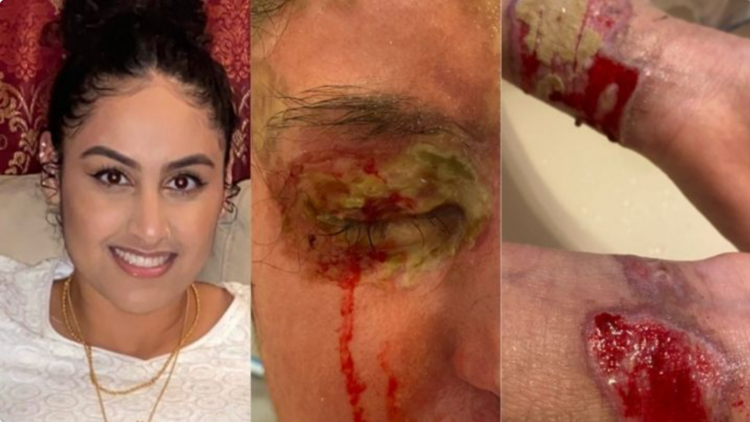 Nafiah Ikram, 21, a pre-med student at Hofstra University, survived a March 17 acid attack outside her home in Long Island, New York. “I ask myself ‘why’ every night. What could I have said or done to someone to make them want to hurt me like this?” said the young Pakistani American. Indian American model and television show host Padma Lakshmi, a friend of the Ikram family, said in a post on Instagram: “It’s uncertain if it was a hate crime & we are still searching for the people that did this to her.” (GoFundMe photo)

More than $519,000 has been raised to help a young woman in New York who survived an acid attack on the night of March 17.

According to Nassau County Police Department reports, 21-year-old Nafiah Ikram, also known as Nafiah Fatima, and her mother were getting out of their car in the Elmont district of Long Island, New York. The Pakistani American pre-med student at Hofstra University was walking on the driveway of her home when she was approached from behind by an unknown male.

The male suspect was carrying a white colored cup containing a dark colored substance — later identified as a yet-unknown form of acid — which he then threw at the victim’s face. The suspect then fled the scene in a 2015 red Nissan Altima. He is described as approximately 6’2” tall, skinny build, and wearing a black colored sweatshirt with a hood. Notably, the suspect was also wearing gloves.

CCTV footage shows Ikram’s mother walking into the family home, while Nafiah stayed behind to get something out of her car. Ikram was attacked approximately 10 feet from the entrance to her home (see embedded video below); she was transported to a local hospital to be treated for severe injuries.

Indian American model and television show host Padma Lakshmi, a friend of the Ikram family, shared a post about Nafiah on Instagram. “The acid splashed onto Nafiah’s eyes, face, chest and arms. Her contacts melted into her eyes & we’re not sure if she’ll ever regain her vision. Her parents tried to help her and it got on them as well.”

“It’s uncertain if it was a hate crime & we are still searching for the people that did this to her. This is every parent’s worst nightmare. Nafiah’s medical costs will be astronomical,” wrote Lakshmi.

A GoFundMe page set up for Ikram also described the horrifying attack. “The attacker used a dark brown acid known to cause blindness and severe burning. Had the acid gotten into Nafiah’s lungs she would have died. When Nafiah screamed it caused the acid to go into her mouth, burning her tongue and throat, which prevented her from breathing.”

“When Nafiah ran into her house and her parents saw her, they immediately tried to help her, but in the process the acid burned their hands and forearms as well. If her parents were not home to help her and call 911 right away she would not have made it.”

The incident is under active investigation by Nassau County, New York. On April 22, Nassau County Police Commissioner Patrick Ryder held a press conference to announce a reward of $20,000 for information leading to an arrest. Witnesses can call (516) 573-8800.

“My advice is to surrender yourself now because we’re gonna get you, we’re coming for you,” Ryder said at the press briefing.

The Council for American Islamic Relations and Rep. Kathleen Rice, D-New York, have called for the incident to be investigated as a hate crime. But Ryder said at the press briefing there is no evidence as yet to say whether the attack was a hate crime. “We have no evidence at this time to say it was not a hate crime. We treat our victims the same,” he said.

In a statement, CAIR-NY legal director Ahmed Mohamed said: “CAIR-NY is disturbed and shocked at the brutality of this crime, and law enforcement must do everything to apprehend the suspects. Our community deserves safety. Amidst the rising hate crimes engulfing the state, it is important that this acid attack by an unknown individual be investigated as a possible hate crime.”

“The family and the community at large must learn why this happened. The New York State Hate Crimes Task Force must aid local law enforcement as the search for the suspects enter the second month,” said Mohamed.

Ikram believes she was targeted by her attacker, who appeared to lie in wait until she was alone outside her home. “I see someone standing at the end of the block by the stop sign just looking at me,” she told ABC7 News. “And I thought that was really weird because especially in our neighborhood it’s very quiet and being that it was March it’s cold. Especially at night you don’t see people walking around.”

“My face was fully on fire. I felt my chest being ripped out of my soul,” she said.

Ikram said she couldn’t eat for a month. Her vision is still hazy, and, for some time, she was unable to read.

“I ask myself ‘why’ every night. What could I have said or done to someone to make them want to hurt me like this?”

Almost 13,000 people have donated to Ikram’s recovery campaign, which can be viewed here: https://bit.ly/3sZOgiF